The magic behind Gasharu’s coffee

From the US Marines to an island in Indonesia: meet Troy Kiper of Bright Java Coffee Sep 27, 2021
The nagging startup feeling of a former banker - meet Florian, our new CFO Aug 13, 2021
How Bell Lane and Canta Galo built a relationship from a 3-bag order Sep 29, 2021
How to break the link between specialty and the C-price & other questions roasters are asking right now Aug 10, 2021
What’s happening with the price of coffee in Brazil - and what you can do about it May 11, 2021
Categories | Subscribe | Populars
Written by algrano
on June 24, 2020

Many people today would describe coffee as magical. As a child growing up in rural Rwanda in the 1990s, the bean had a real superstitious quality to it for Valentin Kimenyi. “I was told coffee beans were sold abroad to make bullets. This was intriguing to me as I always imagined bullets to be magical, small and yet so noisy and powerful,” he recalls. Today a grown man managing his family’s company, Gasharu Coffee, Valentin no longer believes the old childhood tales. Yet coffee still carries special significance to him as the heart of his community.

Though the country has experienced a boom in the number of washing stations, going from 1 in the 1990s to nearly 300 today, and locally-owned companies, the Rwandese market is still dominated by foreign players. “The coffee industry here, specially in the South-West, has been flooded by large multinational companies that have direct access to the global market. In addition to having large capital they also have more flexibility with prices,” Valentin says. But, according to him, there are certain cultural barriers that the all-powerful companies can’t breach. Beyond beans: this is what community coffee means

Gasharu owns 2 washing stations: Gasharu in the Macuba sector (Western Province) and Muhororo in the Kirimbi sector (Southern Province), both named after the villages where they are based. “None of the other companies in our zones are owned by people that live in the community. Coffee for us goes beyond just beans. It is a reason for people to spend time together. It allows families to go out for a meal after being paid and to buy valued dishes like the Igisafuriya and the brochettes, as well as clothes for the family. These are values that outsiders don’t always understand or care about but that add to our quality of life and to the social cohesion of the community.” 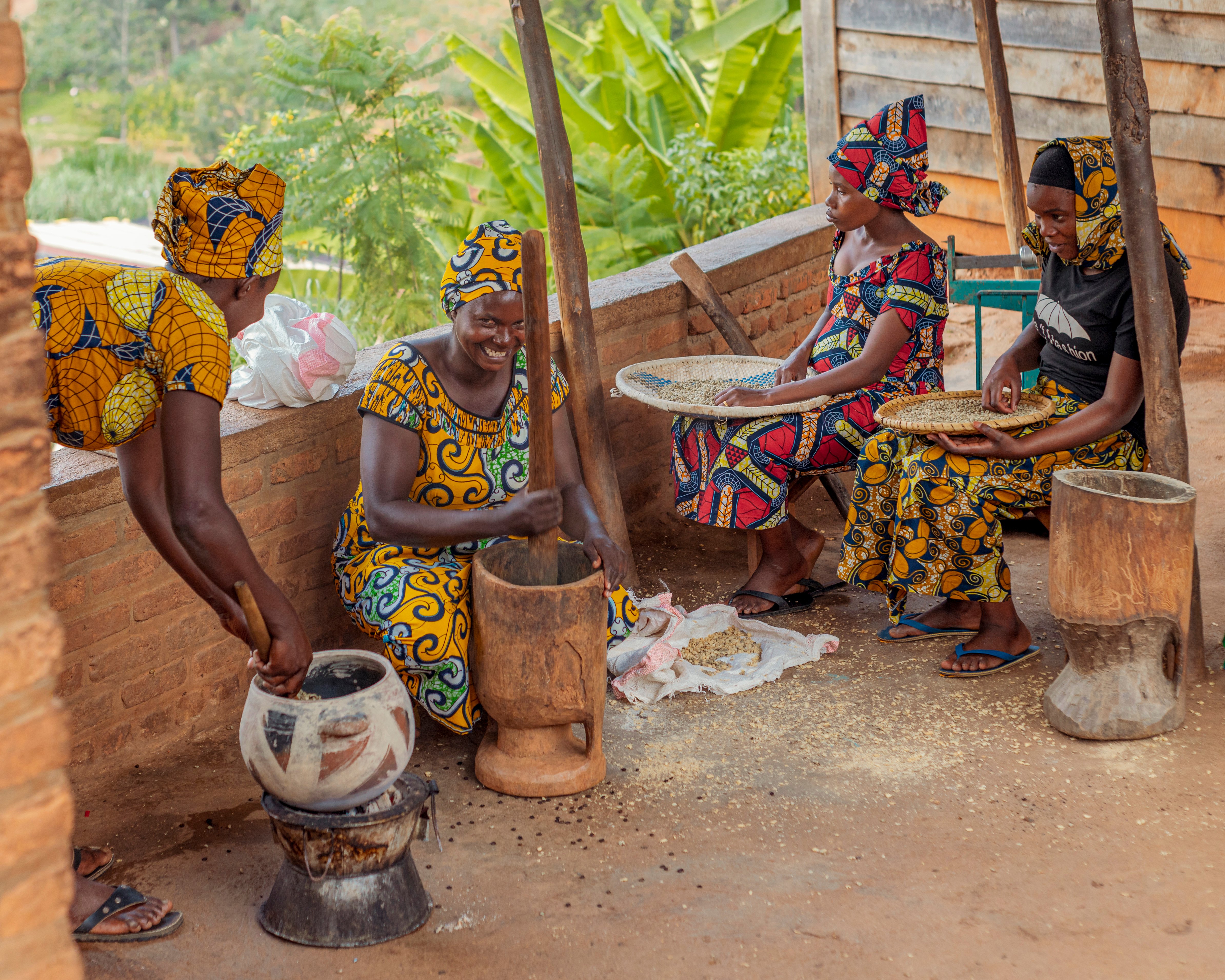 Valentin’s parents Celestin Rumenerangabo and Marie Gorette Mukamurenzyi grew up in the communities where they now do business. “My mother is a teacher and taught several people in the community. They also have a small resto-bar where everyone hangs out, watches football and holds their family gatherings,” he says. The family is always present at the weddings of their workers and partners, contributing to the ceremonies with money and goods and cementing their relations. “There have been many occasions when other companies tried to raise their prices for cherry to attract farmers, but the majority of our partners always refused. There is a shared understanding that as Gasharu grows, the community grows.”

Gasharu’s history: from 380 trees to 8 containers

The story of Gasharu is full of ups and downs and it goes back to 1976, when 17-years-old Celestin Rumenerangabo bought his first plot and planted 380 coffee trees. Originally from Nyamasheke, he left his mother to work for a family in the capital, Kigali, as a housemaid in 1973. He had lost his father during the 1959 uprising that led to Rwanda’s independence and the family was in hardship. It took him 3 days to walk from his village to Kigali and 3 years to see his mother again. When Celestin was back, he invested all his savings in land and coffee and started working with local brokers.

“My father has been business-minded since his boyhood. People in Rwanda tend to do agriculture for subsistence but he was always more interested in commercial agriculture. His only options were tea and coffee and it was his location that made him choose the latter,” Valentin explains. Celestin started working with cherry collection and trading in 1978, before washing stations became active. “Locals would sell cherries or parchment by cups known as Mironko. It was assumed that one cup was the equivalent to 1kg but there were no scales available.” 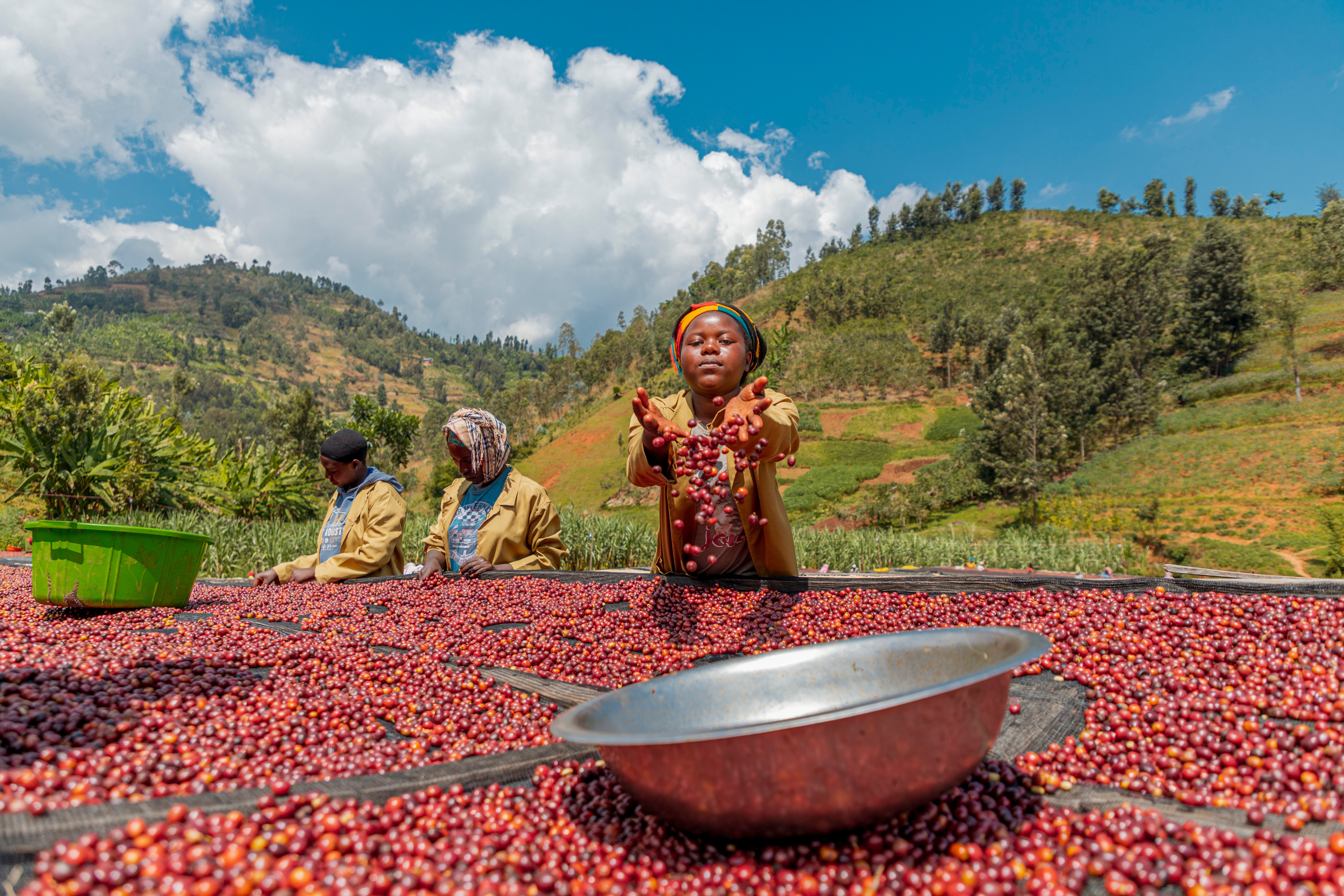 Celestin’s business grew slowly until 1983 when he married Marie Gorette, a 22 years-old teacher that helped him with accounting and supported schooling for other farmers’ children. By 1994 he had 7 hand-crank depulping machines and more than 14 collection sites, providing scales for weighing accuracy and partnering with locals. When the wave of violence of genocide of the Tutsis began, the family fled Rwanda and was forced to abandon the business. Valentin recalls spending “4 years in the Ijwi Island in Lake Kivu, part of Congo’s territory. When we came back in 1998 we had to start from scratch.”

Starting from scratch after the genocide

It was the community who saved Valentin’s family. “They got behind us,” he says. With their trust and the help of a former partner, Celestin started over and was trading nearly 30 tons of parchment 2 years later. “In the early 2000s, the government of Rwanda advised local coffee buyers and traders to use more advanced methods of processing to ensure higher quality and returns. My family then decided to build our first washing station, Birembo.”

Birembo was sold 6 years later and the failure of the project hit Celestin hard. He had taken a loan from a big trader that he couldn’t repay. “This experience is not uncommon among local coffee farmers. Many got their washing stations bought out or lost them because of loans,” Valentin explains. “My father decided to go out of business, a decision that had a real impact on us, especially me and my brother Jean Christophe, who now lives in the United States. It felt like a loss of the family’s legacy and that we were letting the community down.”

At this point, Valentin was a young agronomy student . “I watched my parents count kilos of cherries all my life. In my head, money always had an association with the weight of coffee. Knowing that my parents could do that business and at the same time help people with school fees for their kids or to pay their healthcare bills was what motivated me to pursue a career in agriculture and business,” he says. “I also didn’t like to see my parents not working. They were not happy.”

It took Valentin a few years to be ready to take over the family’s business. He ended his studies in Kigali with a thesis on Rwanda’s exports and worked in the pepper industry to gather knowledge. “This experience allowed me to learn more about the business and the social impact of specialty processing and innovation. It made me realize that we had not done enough with the opportunities we have, all the potential and rich culture that can be portrayed through coffee.” Valentin convinced Celestin to go back into business and together they created Gasharu in 2014 and can now produce up to 8 containers of green coffee. Since then they have exported directly to the United States thanks to contacts established by Jean Christoph, who works in public health in Baltimore, and developed their own protocols to process naturals, honeys and experimental lots.

Though some of their coffees have been sold in Europe through importers, Gasharu’s mission is to have direct relationships with a wide network of roasters that want to make a difference at origin. This way, he can “build a sustainable business that will help us keep the community together and create a legacy that will be carried on for generations.” We can’t say there is no magic in that... 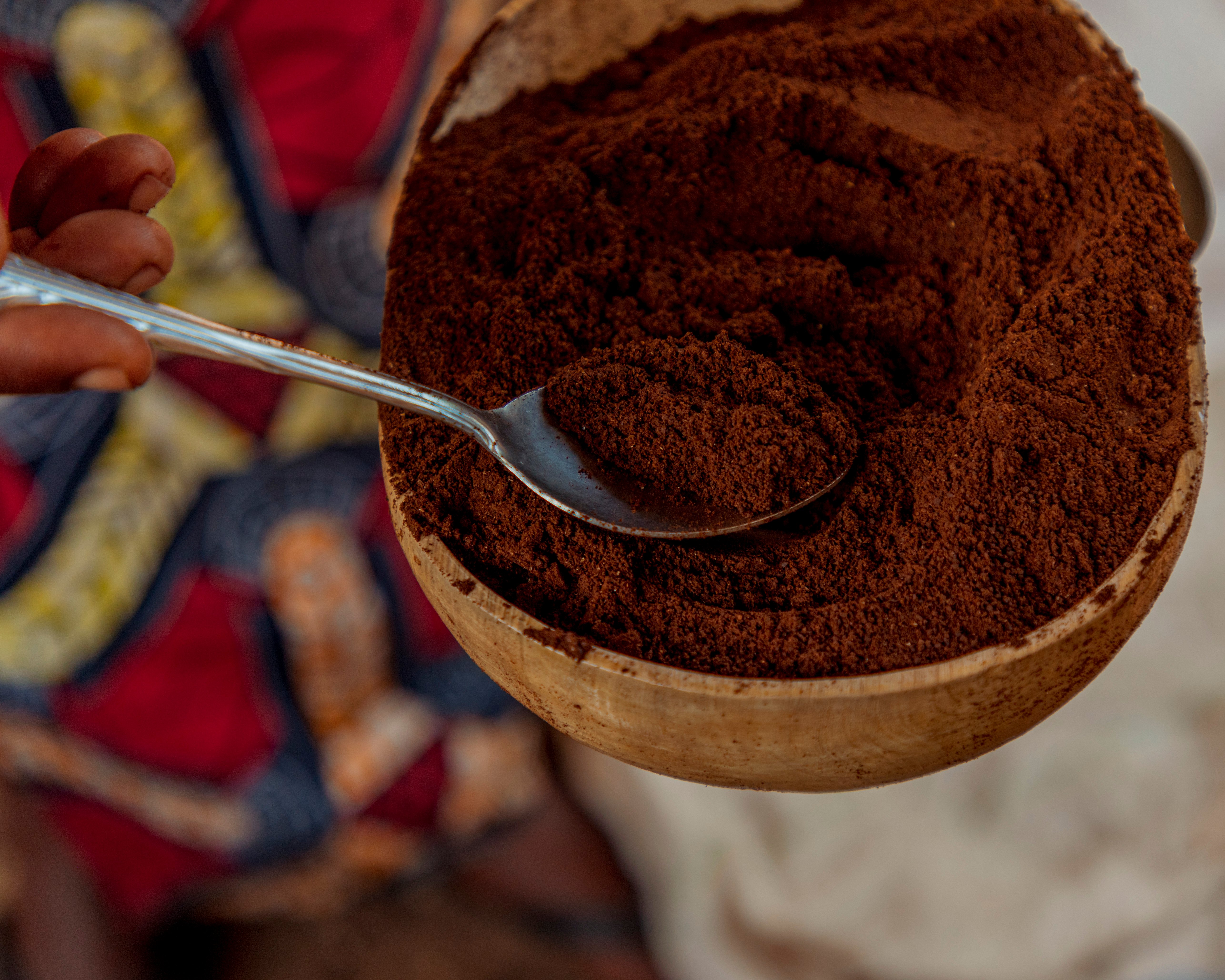 Learn more about Rwanda, coffees on offer and shipping timelines in the new Algrano origin page! 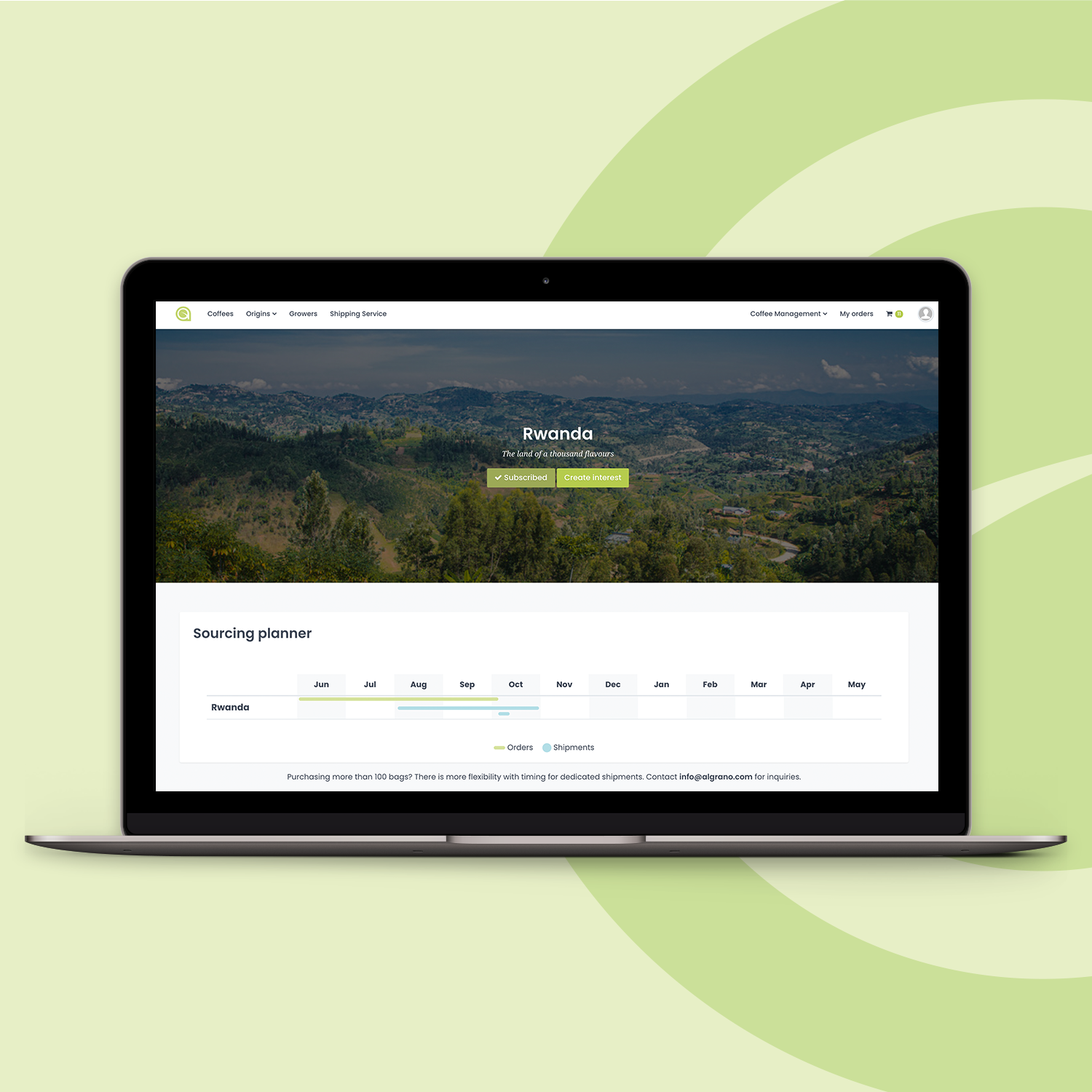