Brazil has faced severe drought since September 2020. This led to higher percentages of malformed beans and screen sizes below 16. Selection and dry-milling will keep defects from reaching roasters but have reduced farms’ productivity. Read the article to understand from agronomists how hydric stress affects plants, bean development and next year’s crop.

The weather in Brazil has been cause for concern for producers and buyers alike this year. First, the country was hit by a prolonged drought that shows no signs of giving a break as we move from winter to spring. Then came three waves of frost. We know what this means for prices. But what does it mean for quality? Are coffees going to have more defects due to the climate? Are they going to taste worse?

The short answer is no. Not so much because farms escaped all damage, but because defects will be removed in the dry-milling and selection stages when the coffee is being prepared for export. “The effects of the frost and the drought are not going to hit international consumers. The defects and small beans will stay here and be sold in the internal market,” says Sérgio Brás Regina, agronomical engineer and technical coordinator at EMATER (Technical Assistance and Rural Extension Enterprise) in Minas Gerais. 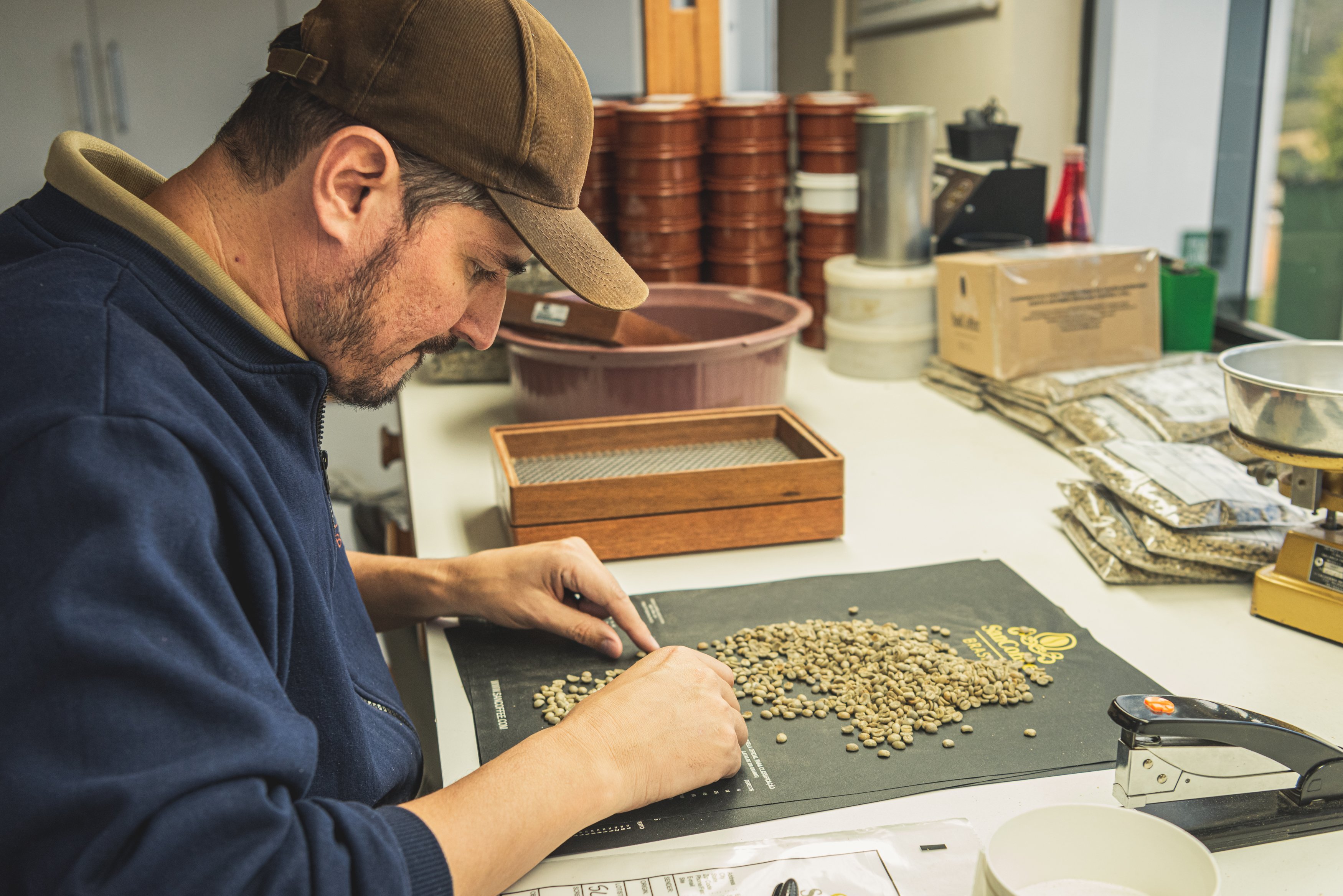 How bad was the frost damage?
As the harvest in Brazil is virtually over and cherries left to pick are few and far between, the frost damage for next year is still being assessed. “We need between 20 and 30 days to be able to evaluate the damage caused by the frost. A preliminary survey shows that more than 20% of the state of Minas is affected but it is premature to talk about how many bags will be lost next year,” Regina explains.

The agronomist recently flew over the lowland area of Alfenas in the South of Minas near a reservoir called Lake Furnas. “This region was hit the worst. Lake Furnas acts as a frost barrier by absorbing the heat from the sun in the day and releasing it overnight but the water levels are so low, because of the drought, that the crops were left exposed.” According to EMATER’s preliminary assessment, 156,3 thousand hectares and 9,5 thousand farmers were affected, yet the full extent of the damage will only become clear when the rain comes. 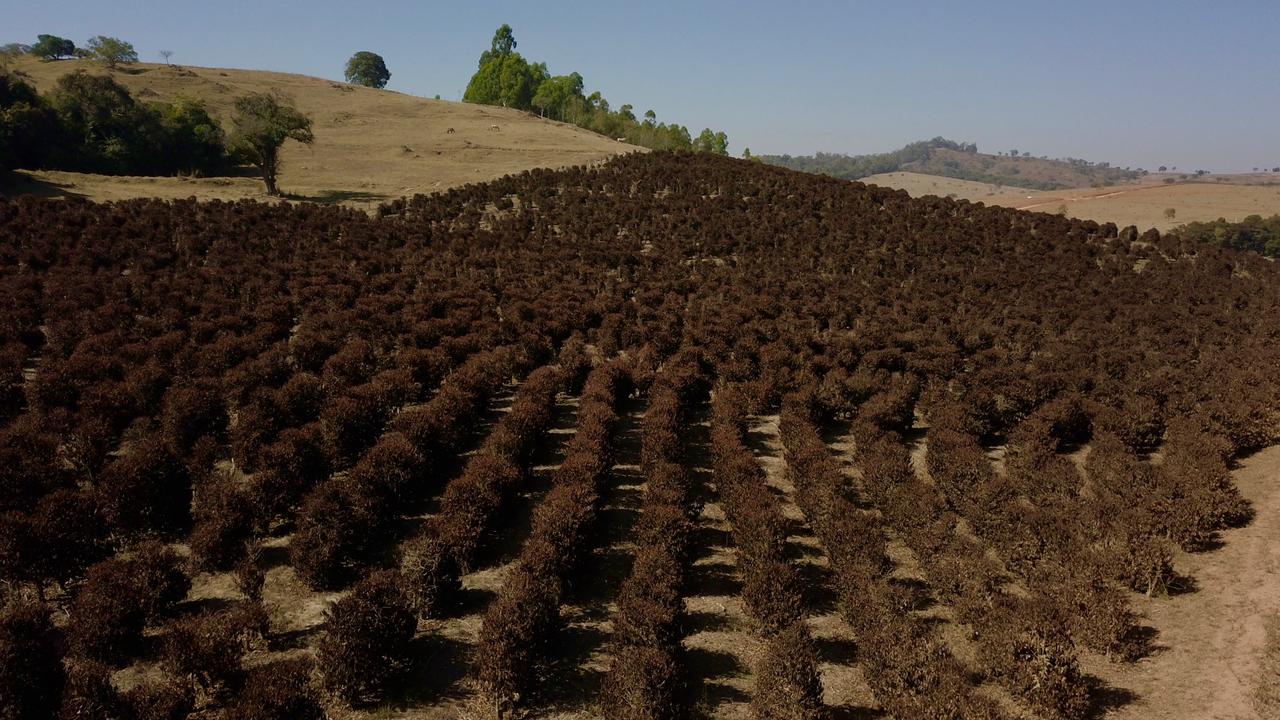 Farm hit by this year's frost in the South of Minas Gerais (Photo: Certifica Minas Café/Emater-MG)

Up to this day, there is no research correlating frosts to lower quality. There are only empirical observations by farmers. These anecdotes indicate a loss of sensorial quality in mature beans after frosts despite them hitting when the seeds are fully formed. “We don’t know why, but it seems like the cup ends up with nuances of green leaves. We haven’t seen anything like that this year though because the harvest was nearly finished when the first frost happened,” says Regina.

Read more about frost damage in this LinkedIn post by José Donizeti Alves, Professor of Plant Physiology at Federal University of Lavras (UFLA).

What happens to coffee plants during severe droughts?
While the impact of the frost remains a question mark, the drought has had a real influence on coffee this year. Other than the crop’s biennial cycle, it is one of the main reasons behind the loss in productivity that has been driving market prices up (or at least it was before the frosts created the current havoc). Though coffee plants are resilient against extreme drought periods, the prolonged hydric stress hit Brazil at the bean-filling stage, a critical phase for fruit development, when the endosperm expands to form the coffee bean as we know it.

“Up until January, we have the growth phase, when the fruit grows to nearly its optimum size. From there on, the seed will grow and the fruit will ripen. Bean-filling is the development of the seed when it grows in size and dry mass and it develops its chemical structure,” explains the agronomist and specialist in plant physiology Gustavo Costa Rodrigues of EMBRAPA (Brazilian Agricultural Research Corporation). “Due to the long drought, the composition of the seeds will be altered. You’ll find beans that are too small, less dense or even hollow,” he says. 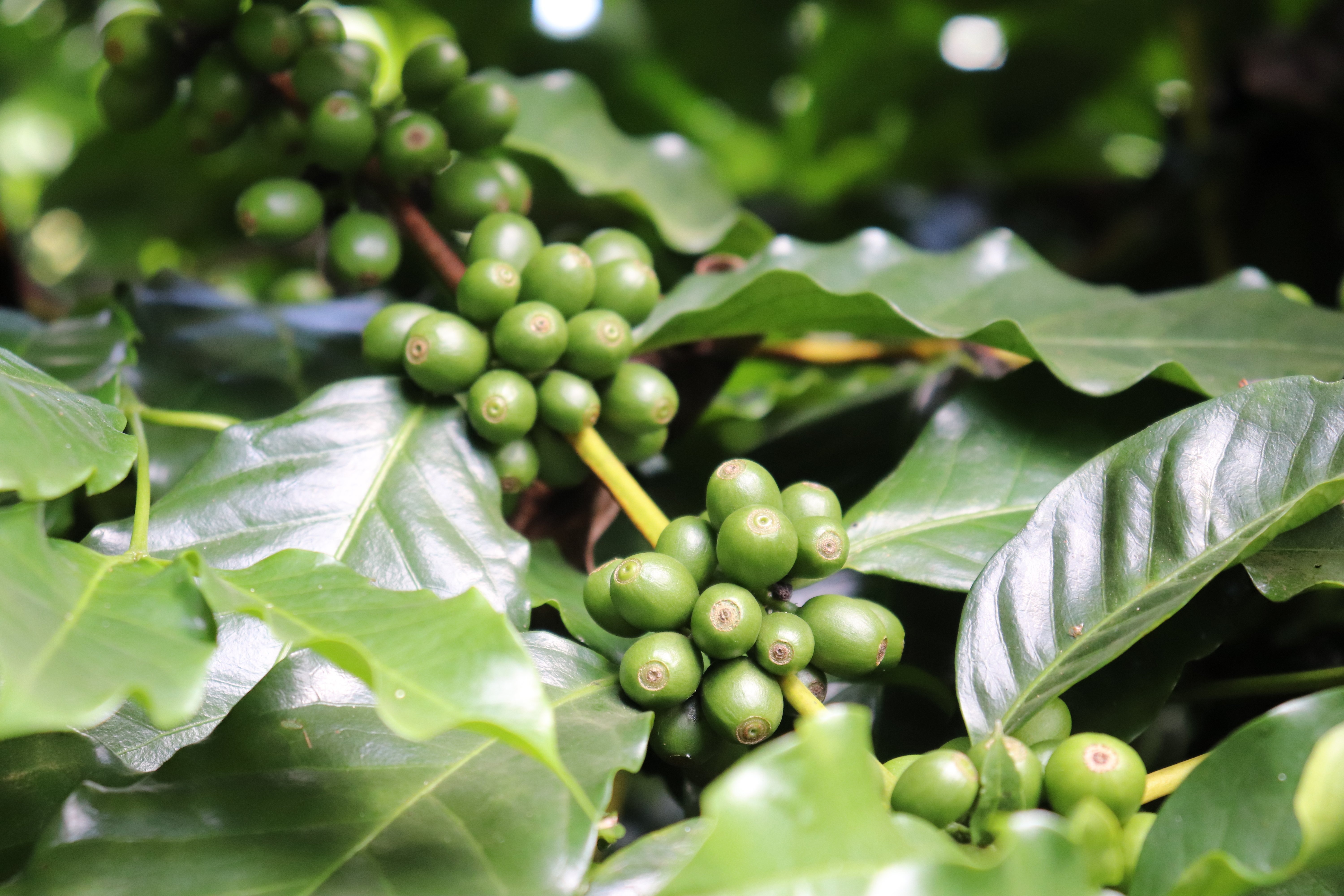 The bean-filling stage starts when the fruit is nearly fully formed and to it's full size yet still green (Photo: SanCoffee)

Why is the incidence of malformed beans higher?
The coffee plants need energy from photosynthesis for bean-filling and without water, photosynthesis is reduced and can be ground to a halt. During the process, the endosperm starts accumulating photoassimilates, the resulting biochemical compounds such as saccharose, lipids and trigonelline. The malformation defect referred to by Brazilians as chochos is a direct consequence of the lack of photoassimilates in the bean-filling stage. A higher incidence of smaller screen sizes, another issue being widely reported by Brazilian farmers this year, is another consequence.

“With lack of water the plant has less photosynthesis and you have a higher incidence of chochos. It doesn’t mean all seeds of that plant will be like that. The plant prioritizes some fruits, which we call drains, whilst others don’t receive energy. Some drains can receive only a little energy and the seeds end up malformed or small. Others will receive the full amount and will develop well. Basically, there isn’t enough energy for all the cherries, and so the incidence of defective beans increases, contributing to reduced productivity,” explains Rodrigues. 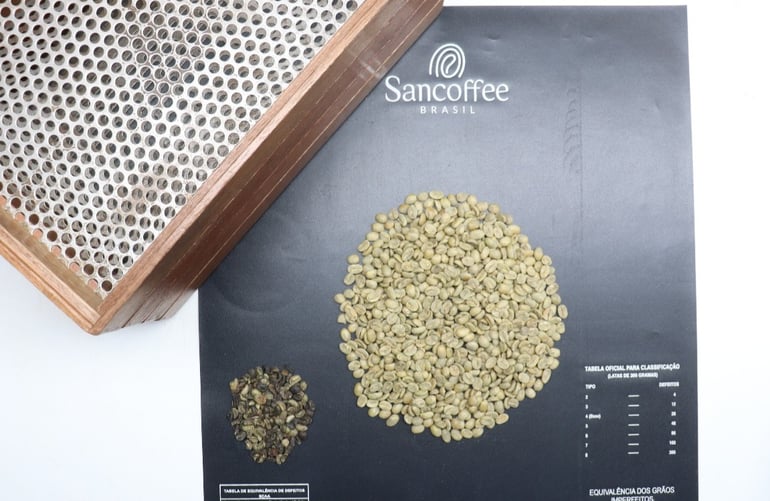 Learn more about what is happening in Brazil right now in a webinar with SanCoffee, a cooperative in Santo Antônio do Amparo, on the 12th of August. We will talk about the recent weather events, demonstrate their impact on coffee and discuss common quality myths. It’s a great opportunity to improve your knowledge of green coffee!

Which altitudes suffer most?
In his field visits, Regina confirmed that the percentage of beans above screen size 16 is reduced, especially in farms with higher production. “Those with a smaller cherry load on the tree didn’t present any alteration and those on mountainous regions showed a lower incidence of small screen sizes. These areas are cooler and conserve more humidity in the soil and atmosphere, helping to prevent damage,” he says. According to the agronomist, plantations that had multiple flowerings at lower altitudes - those below 900 m - are showing higher percentages of malformed beans because the second and third flowerings were more affected by the drought.

Another effect of droughts is nonuniform cherry maturation. “As the plant can’t send equal amounts of nutrients to all the fruits, some will be hindered and end up maturing more slowly,” explains Regina. This could lead to a quality problem but “farmers that export and produce specialty coffee are careful to separate their lots. They wash the coffee to separate the beans by density and avoid this reaching the cup.”

Are droughts cyclic?
This is not the first time Brazil faces a severe drought. The previous year with similar conditions was 2014 but the phenomenon was also registered in 1963 and 1942. When asked if this is a cyclic event, Rodrigues is clear: “No. However, it is happening more often. If the weather was decided by throwing dice we would say the dice are loaded. The same with heatwaves.” The specialist warns that these can be even more problematic than droughts. “If it happens during the fruiting phase when fertilisation and the initial fruit setting take place, the fruit is lost. It burns.” Heatwaves are measured in hours above 34 degrees Celsius. “Luckily it didn’t happen this year,” says Rodrigues.

As the coffee plant is in both production and growth mode at the same time, the agronomists are looking for signs towards the 2022 crop’s performance. “Production starts with the first serial buds on the trees’ branches and relies on the number of reproductive gems springing from these buds. Then we need to see how many survived. Then we need to learn, from the survivors, how many succeeded at the bean-filling phase,” explains Rodrigues.

“This year we observed less growth of the branches. There are fewer nodes that will become flowers, pointing to a smaller production next year,” he says. The plant displays several metabolic and physiological problems under hydric stress because the stomata, the pores of the leaves, close to avoid water loss via transpiration. “The plant starts roasting from the inside.” 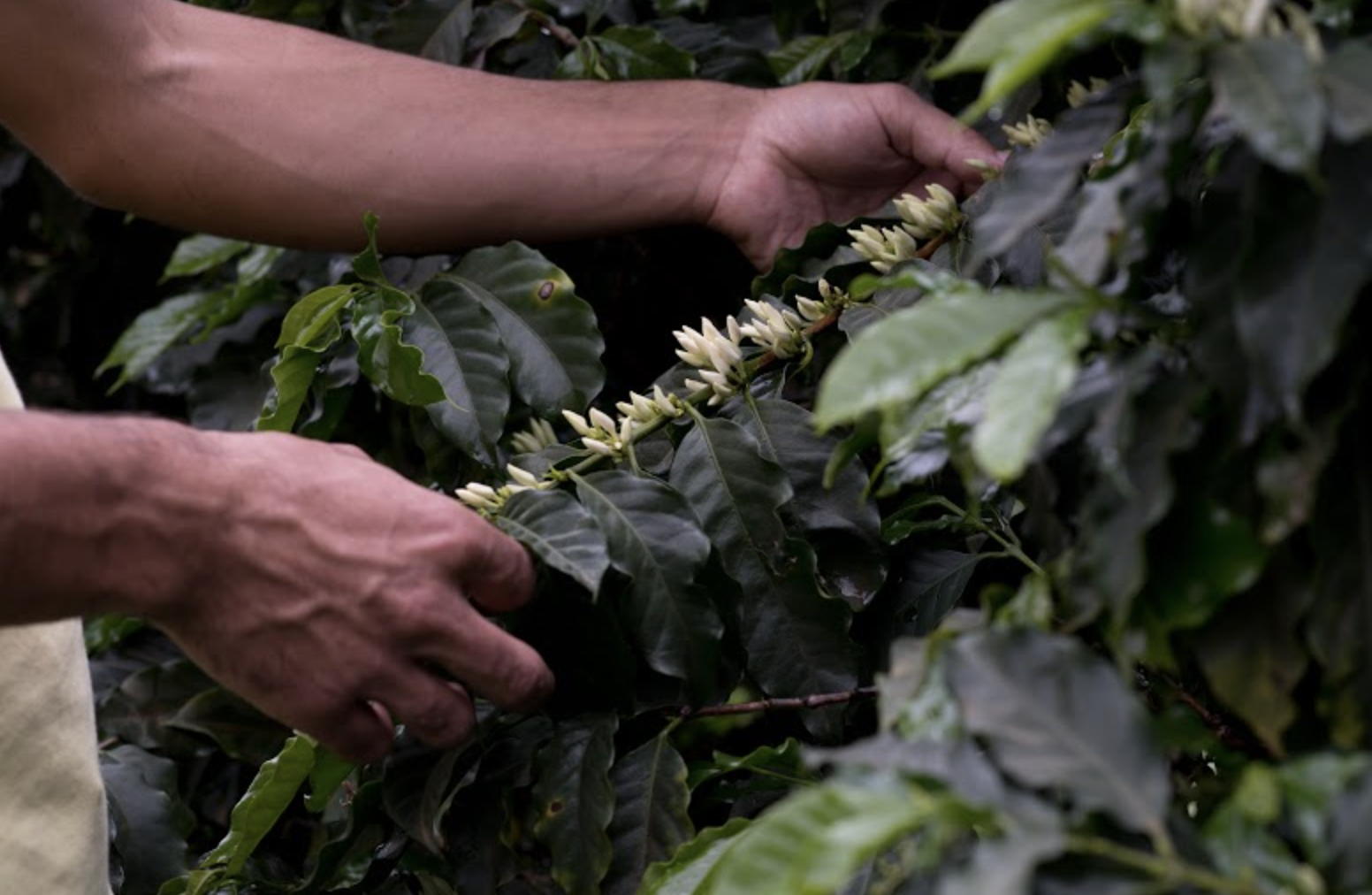 The flowering season is one the most critical stages of the production cycle. If hit by heatwaves, the buds can abort (Photo: Algrano)

Next crop: when will we know what is happening?
The frost has also burned leaves and might have affected the flower buds but they can recover and grow back. This is why the real extent of the frost damage will be known only in September when the first rains come. Unfortunately for Brazilian farmers, August will likely remain mostly a dry month with only localized rains. September should welcome the rainy season, which will consolidate in October. If rains are late, flowering will also be delayed and at risk of happening during months of higher temperatures, when flower bud abortions become more common. 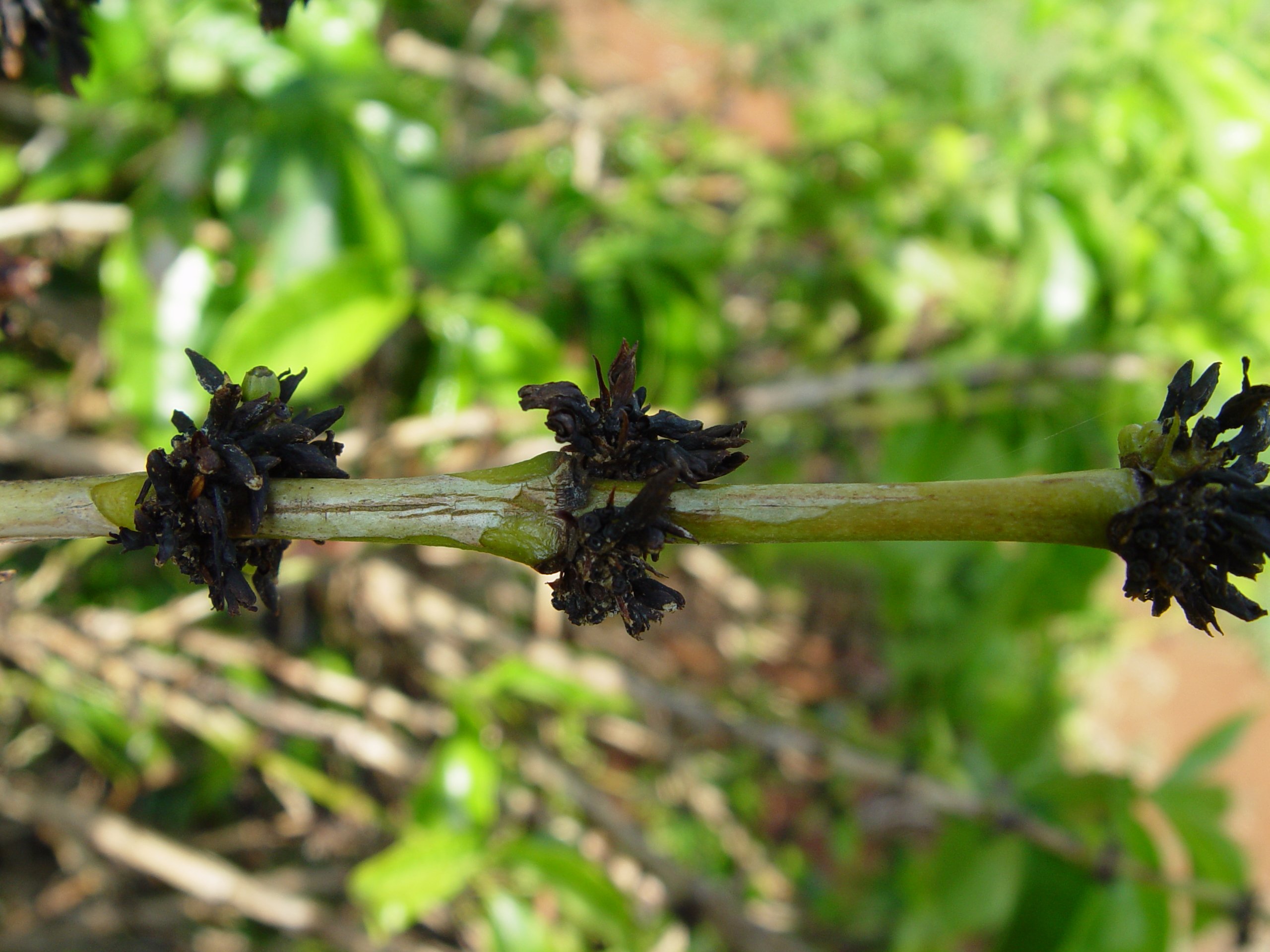 This is what reproductive buds look like after a heatwave (Photo: Gustavo Costa Rodrigues, EMBRAPA)

Things are not looking great up to now but we are not in Back to the Future and cannot predict what the weather will do next. For now, we can rest assured that the quality of Brazilian coffee remains good even if there is less coffee available in the market. It is important, now more than ever, to learn how your suppliers are being affected by the weather and what you can expect from them in the future. Relationships are the best defence producers and buyers have against instability and now is the time to find a good partner and secure your supply.