Tanzania: Take a sip on the wild side

Coffee trees in Northern Tanzania are deeply rooted in the volcanic soil, digging for minerals and water below the dry terrain. Only the strongest survive in the Ngorongoro Highlands, a land populated by all sorts of beasts: elephants, wild boars, dik-dik antelopes, buffalos, and baboons to name a few. Because of this (not always peaceful) coexistence, the coffees from North Tanzania have earned an unusual reputation: they are the “wildest” on earth. This is where we found the lots from our #TanzanianDiscoveries. 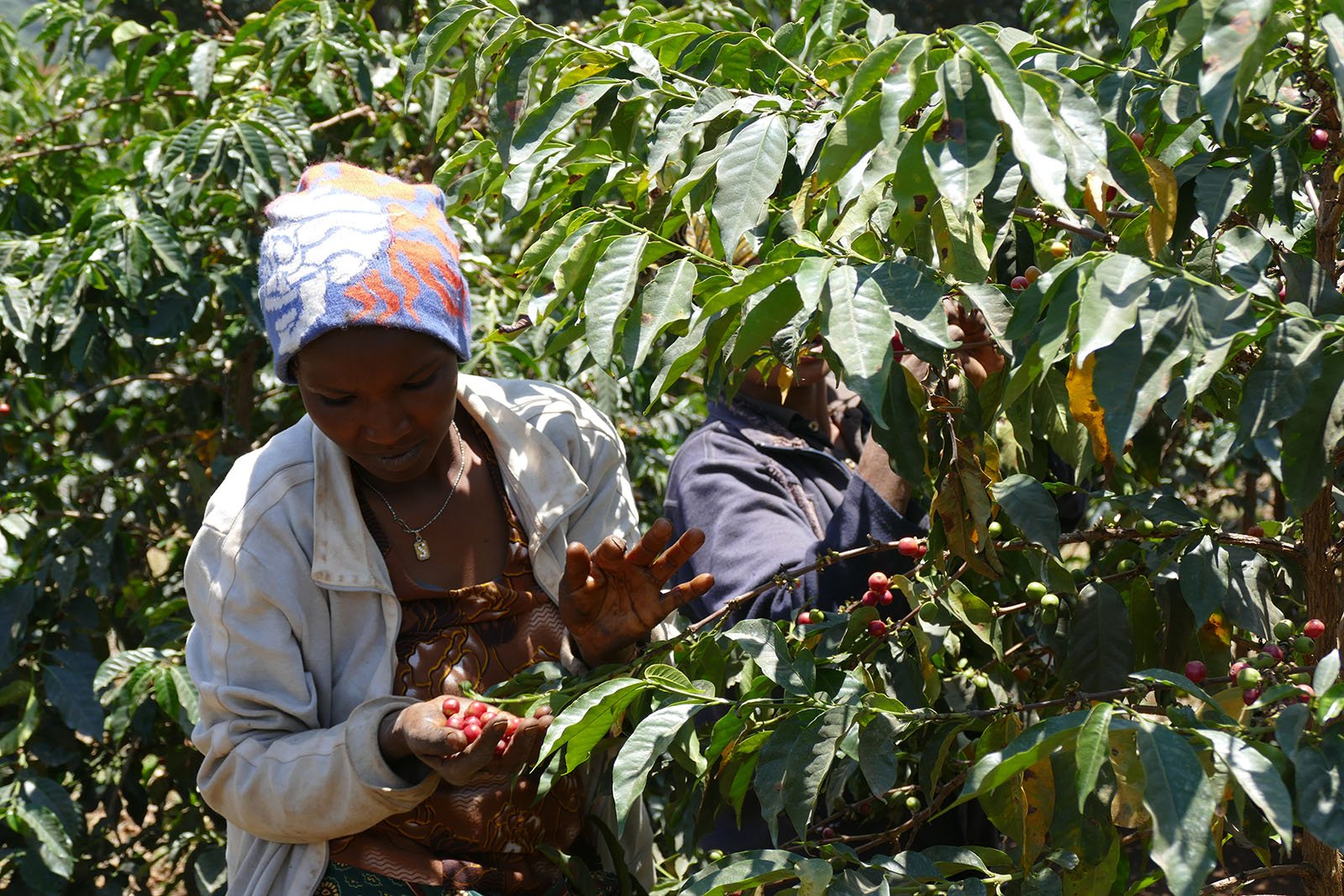 This campaign features three estates: Edelweiss Coffee Estate, Finagro Plantations, and Ngila Coffee Estate. With altitudes starting at 1600 m, they are located in the Karatu district, Arusha region, at the rim of the Ngorongoro Conservation Area (NCA). The NCA is home to the Ngorongoro Crater and the Northern Highlands which merges into the Serengeti plains, an area used by countless wildlife species as a migration corridor. Though spectacular to witness, the close contact is not free of perils. Wild boars eat seedlings and dig holes in the plantation, elephants knock down trees and, if the farmers aren't careful, baboons will get to the ripe cherries before they do.

“Animals are very sensitive. They don’t need a Brix meter” says Vera Stucker, owner of Ngila Coffee Estate alongside her husband Rudolf Meyer. “You can follow the baboons! But if you’re one day late the coffee is gone.” The couple has dug a pond with a water hole near their house where they can watch elephants and buffalos escaping the heat. Seeing elephants so close these days is a good sign (if they are comfortable around people it means there is less poaching), but it wasn’t always so. 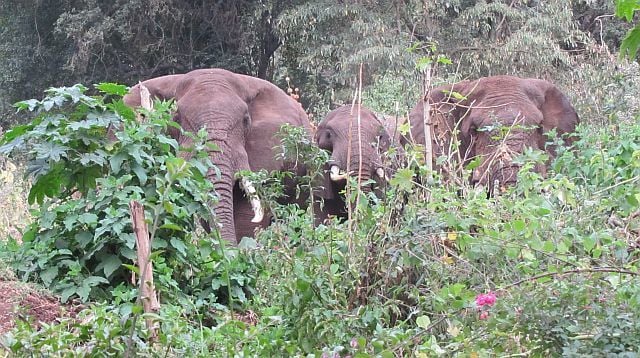 “Until 2006, we had no power on the farm. Every night around 30 elephants would walk in and leave a trail of destruction behind them. They would play with the irrigation hoses and, in the morning, we would find bits of it on top of the trees,” she remembers. “They would also knock down trees, making it impossible to create a shade cover for the plantation.” Since then, Vera decided to fence the trees leaving 80 hectares of cloud forest for the animals to wander.

Neel Vohora, of Edelweiss Coffee Estate and Finagro Plantations, has had similar issues in the past. However, today he is proud to say that the two farms not only coexist in balance with wildlife but help to protect it, acting as a barrier between animals and poachers. His estates, as well as Ngila, have been Rainforest Alliance Certified for many years. “The boundary with the conservation area is 3km wide, allowing us to control activities around it. The community can sometimes encroach the wild habitats and retaliate if they destroy the crops. We act as a buffer between wildlife and the local community, preventing direct contact.”

Other than creating corridors where the animals can walk without affecting the coffee trees, Neel has used the elephant’s well-known fear of bees (it’s more like panic) to solve the problem. He distributed more than 120 beehives around sensitive areas of the farms, keeping elephants at bay and improving the local environment. Coffee trees are mainly self pollinators, so the bees’ activity helps to bring diversity to the crop and the honey can be sold at the local market. Neel also grows macadamia trees and timber species. “Years ago we noticed the rain wouldn’t go past a certain point, as if there was a barrier. We wanted to see if reforesting would influence the rain pattern and increase humidity. It sort of worked, but it’s hard to assess due to the climatic change. We are down 30% in rainfall compared to the ‘80s,” he tells. 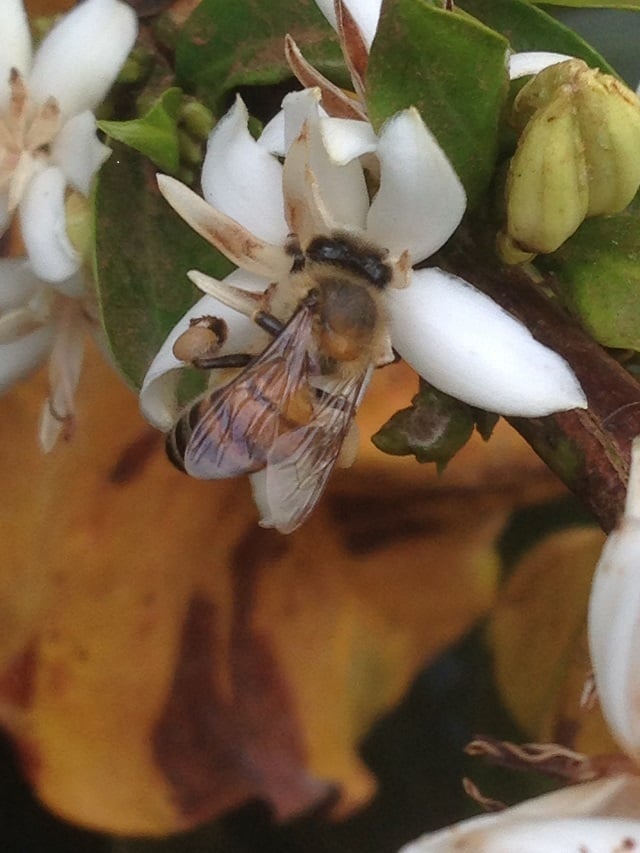 The title of “wildest coffee” wouldn’t mean much if the quality wasn’t there to back it up. Who needs another kopi luwak? The Northern estates of Tanzania are known for producing good coffee consistently and delivering it despite political instability. They are diligent with processing practices, making sure to properly assess the soil, fertilize, and prune, maintaining healthy production levels. They are stable enough to survive the government’s change in regulations in 2018 and lucky enough to have escaped the nationalization in the ‘70s. The estates offer a safe avenue for both specialty and traceable coffee.

Traditionally, Tanzania is a producer of fully washed coffees. The three washed lots selected by the farms for this discovery were chosen for being good representatives of the terroir and their high processing standards. The volcanic soil translates to the cup in the form of a pleasant acidity similar to Kenyan coffees and the high altitudes where the farms are located help mature the cherries slowly, developing sugars. “These are some of our early harvest. Our coffees are particularly good and very consistent this year,'' says Neel, highlighting the cup balance and structure. Vera’s FW, Glanmalure Special, is a very pleasant coffee with intense apple-like acidity, chocolate, and spice notes.

In Neel’s words, the washed lots are the farms’ “bread and butter”. They can produce big lots with similar profiles consistently every year. Sensitive to the need to differentiate in a dynamic market, especially one that “hasn’t been a very good payer in the last 3 to 4 years”, they have been working on some special preparation micro lots as well. Finagro and Ngila have both produced a honey this harvest. Neel is very secretive about his recipe, a 3-in-1 mix of natural, honey and washed processes. “We are calling it a honey because the coffee has the attributes of a honey - it’s sweet with complex flavours - without the extreme fruitiness people associate with that method,” he says.

Vera’s lot is a more traditional yellow/golden honey process. The cherries are pulped without any water on her Colombian eco pulper so that the mucilage isn’t removed. Then they are dried on raised beds for 12 to 23 days depending on the weather. The coffee is later stored as sticky parchment, dried again and hulled with no heat (otherwise the mucilage turns into a gummy mess). “It takes 3 times the space and 3 times the time to produce it compared to the washed. The result is a dominant sweetness and fruity flavours,” says Vera. During algrano QC there was a round acidity, also like red apples, lots of sweetness and chocolate notes supported by a good body. It’s worth noting here that Ngila has abandoned the use of pesticides 5 years ago, which makes labour even more intensive, but also more sustainable.

Ngorongoro: from crater to cup

Another highlight in this campaign is Finagro’s anaerobic fermentation lot, described by Neel as a “very sweet and clean coffee with a clean aftertaste and juicy mouthfeel”. When cupping, he noticed how the sample kept its balance and profile while cooling down: “It doesn’t fade and you can easily drink it as an iced coffee!” Finagro’s honey and anaerobic lots are composed of the same blend of mainly Kent and Bourbon varietals, giving you the chance to taste the same coffee two ways. The same goes for Vera’s washed and honey. 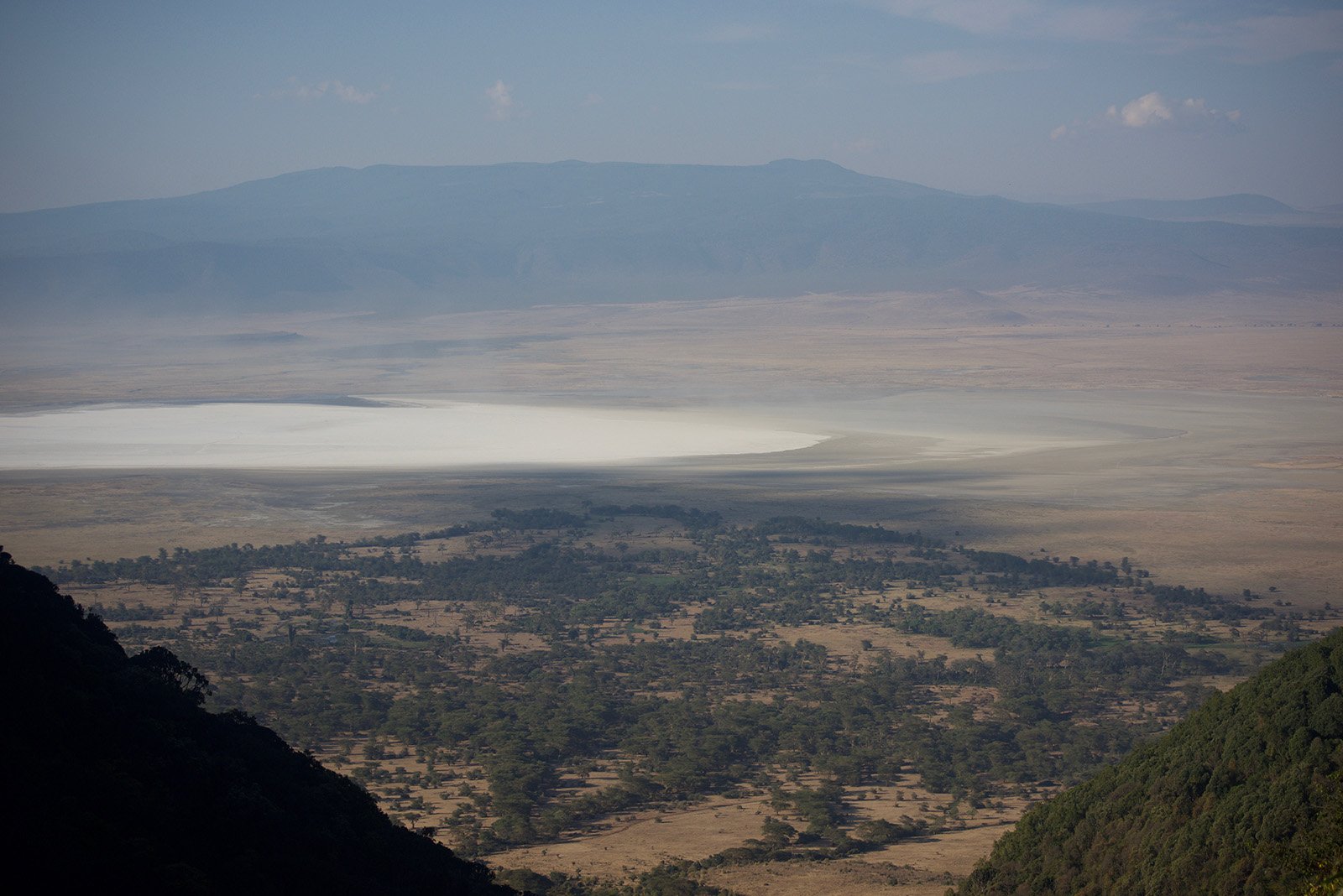 All three estates are part of Ngorongoro Coffee Group, which organizes a yearly event called “Cupping at the Crater” around harvest time. The three have been growing Gesha and Pacamara varietals which will start to produce in the next few years. Neel is developing new fermentation processes with three different yeast strains and Vera is optimizing her anaerobic fermentation method. She already produces natural lots, black honey, and is trialing a late harvest micro lot made using only the purple cherries to create a sweet and winey profile. 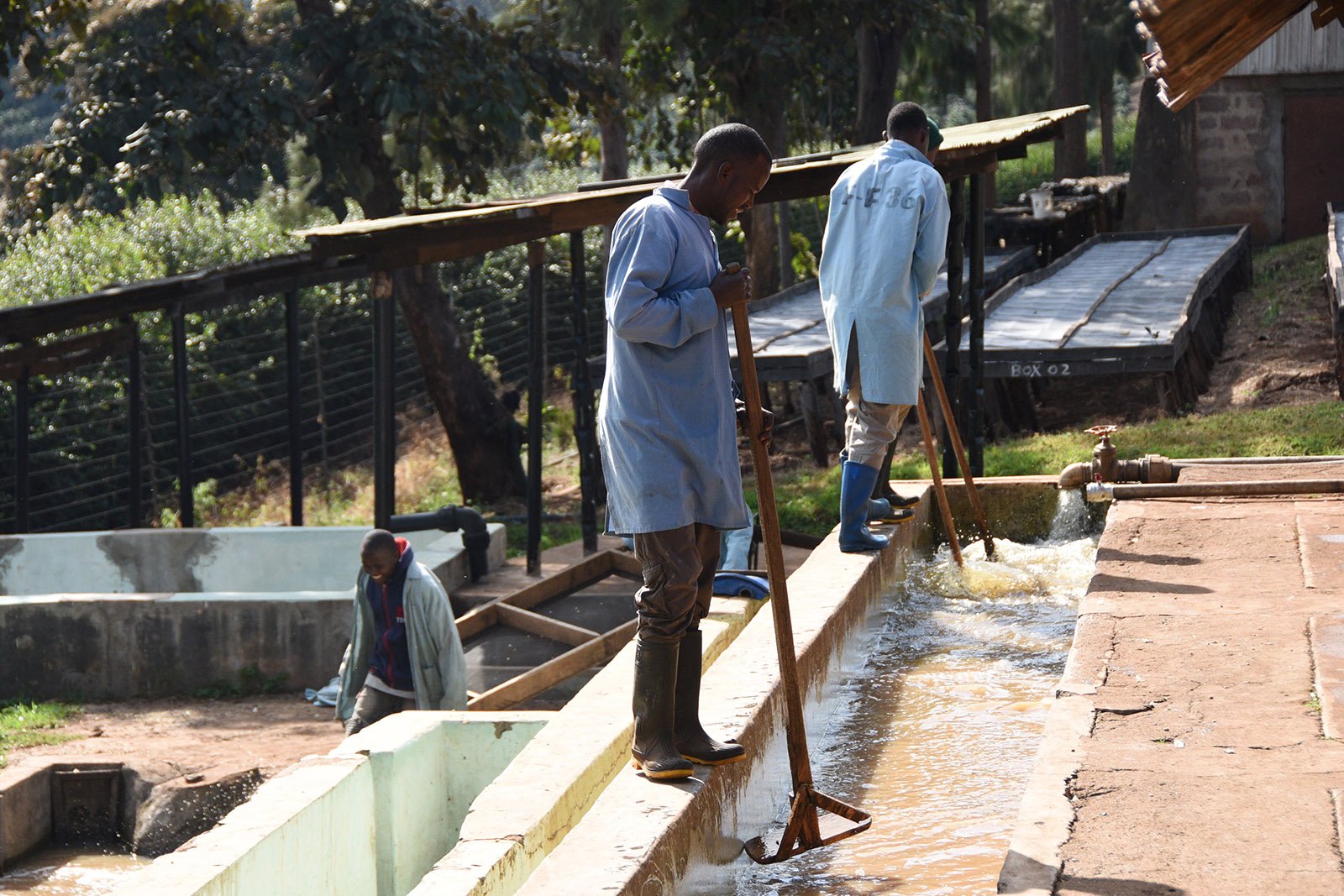 You’ll be able to have a taste of what Tanzania can offer from 14th October which comes with the potential for a future relationship. And, who knows, maybe first dibs on the new experimental lots of the wildest of the wildest coffees…!

Gonzalo Mancilla - Finca San Fernando What are the chances of meeting a farmer that is also a roaster, a Q Grader, a bar...