From the US Marines to an island in Indonesia: meet Troy Kiper of Bright Java Coffee Sep 27, 2021
The nagging startup feeling of a former banker - meet Florian, our new CFO Aug 13, 2021
What’s happening with the price of coffee in Brazil - and what you can do about it May 11, 2021
How Bell Lane and Canta Galo built a relationship from a 3-bag order Sep 29, 2021
How to break the link between specialty and the C-price & other questions roasters are asking right now Aug 10, 2021
Categories | Subscribe | Populars
Written by Luiza Furquim
on February 24, 2022

February is time for fruit filling in the Brazilian coffee harvest cycle. It’s summer, so hot and sticky. After a prolonged drought in 2020 and 2021, producers were eager to see some rain this year. And they did. But luck doesn’t seem to be on the side of farmers despite what one might think given the prices. When it rains it pours, they say. The first six weeks of the year have been of heavy rains in Minas Gerais. Combined with the heat, high humidity is creating the perfect conditions for the development of fungal diseases. And if we had any doubts about the lower volumes for the coming season, now we don’t.

1,800 km, 9 days, 7 partners, 5 regions
Two members of the Algrano team went on a road trip throughout Minas Gerais this month: from the town of Manhuaçu in Matas de Minas next to Serra do Caparaó across the state to Patrocínio in Cerrado Mineiro then to the gates of Cerrado in Campos Altos, down to Santo Antônio do Amparo in Campos das Vertentes and finally to São Gonçalo do Sapucaí in Mantiqueira de Minas. We drove nearly 1,800 km in 9 days onboard a 1.0 Liter Fiat Argo that, despite its efficiency, had no power to face the muddy roads (unless you have an experienced driver such as Augusto Borges of Capadócia Coffee and an extra push from Maurício Hervaz of APAS). 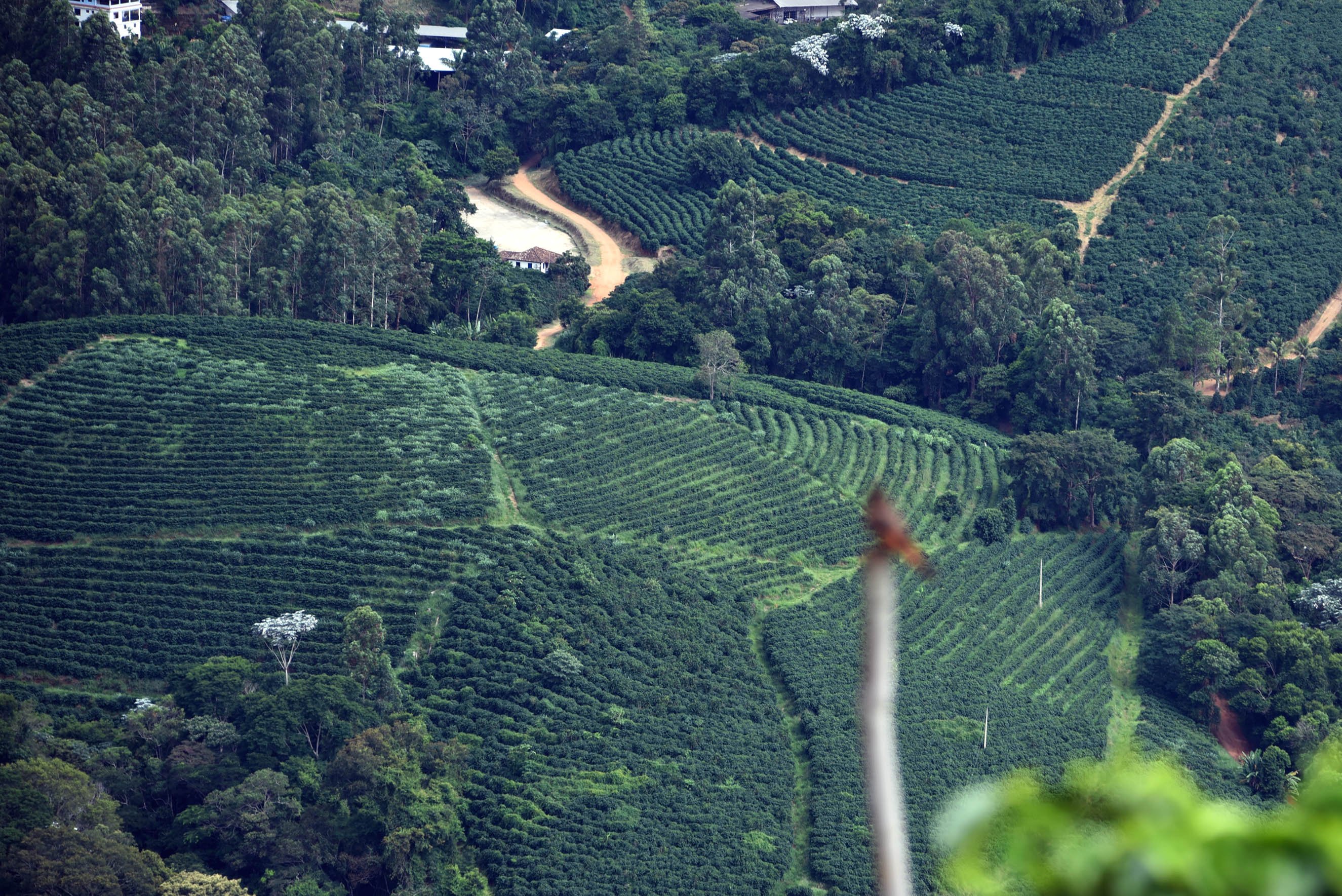 In this time, we visited 7 partners and around 10 farms in 5 regions. In most farms, coffee plants are looking healthy. This speaks for the farm management adopted by the sellers we verify. At Fazendas Klem, for example, 80% of the farm in Luisburgo town were pruned in 2020 and now they look tall and strong. As Klem is organic, the trees are fertilized with chicken manure and “torta de mamona” (mamona pie, rich in nitrogen). At Sancoffee, they started growing saplings in tubettes so that the roots of the new plants don’t flatten in a circle at the bottom of a plastic bag. When this happens, they need to be cut before planting. The roots never fully develop after this, are less likely to reach deep soil and become less resilient to droughts. 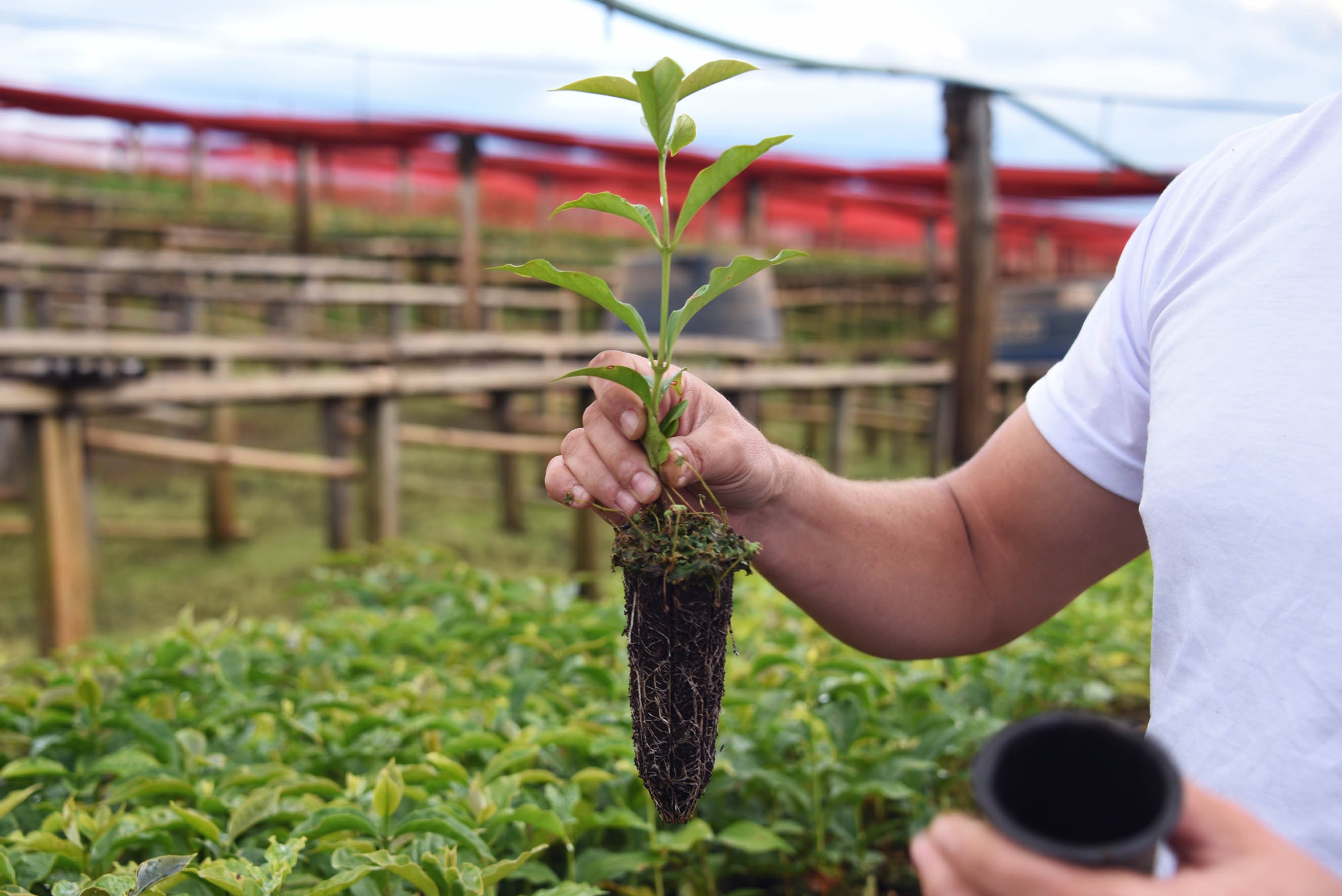 Matas de Minas and Cerrado: a stark contrast
Matas de Minas region, where Fazendas Klem and D’Brasil Organic are, were affected by the drought but seem to be recovering well. The area is monotonous and has a mild climate. Even if we saw rivers of rain in the town, the farms are receiving an ideal amount of rainfall and the beans that made it are developing well. There is no excessive humidity either, so the risk for diseases is small. What farmers do notice are different levels of productivity among their farms, most likely related to rain patterns. Though they are in the same region, certain plots got more rainfall or earlier rains than others. 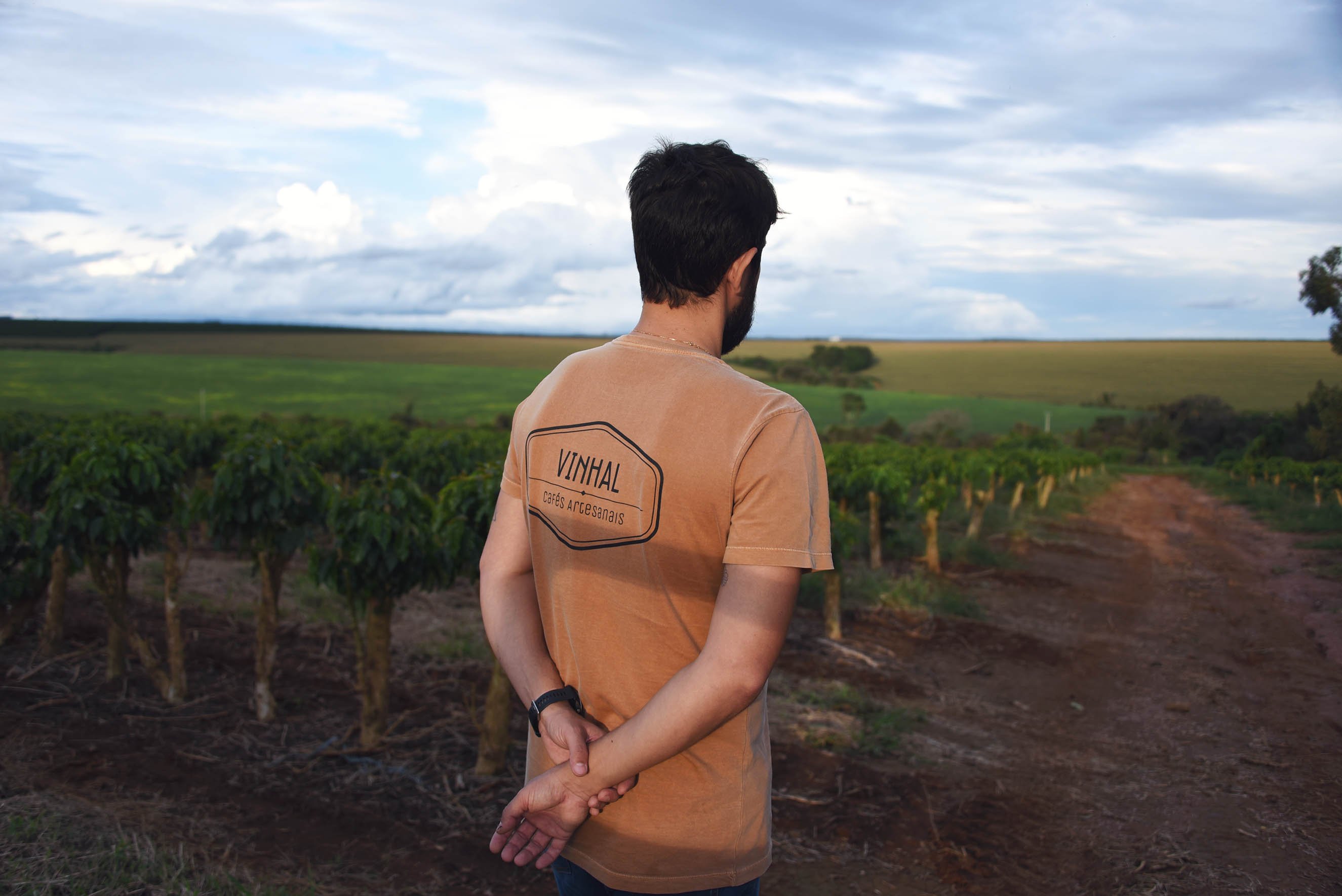 Rafael Vinhal walking through a lower area of his farm where trees had to be stumped because of the frost (Photo: Algrano)

Compared to other regions, Cerrado suffered the worst. Farmers like Rafael Vinhal and Bruno Antonio Franco talk about a 40% to 50% reduction of their volumes for 2022. They might end up with 1,000 fewer bags than they normally would, maybe more. This is mainly because of the prolonged drought, which weakened the plants, but also due to the frost, which hit areas under 1,000 masl harder. In Cerrado, farmers trialled pruning for a while until they realised they would have to stump the trees at the base and sacrifice two years of production. There is a lot more soy in the landscape too, as producers turn to a crop that also had a price boom and that can be harvested three times a year.

A record crop in 2023?
Trees in all regions displayed irregular loads. Some were brimming with green beans, others not so much. The farmers themselves don’t know why this is the case. This irregularity is one of the reasons why it’s so hard to assess the volumes of the coming harvest. Estimates range from 50 million bags to 55,7 million bags of 60 kg. Either way, despite this being a bumper year on the biennial coffee cycle, there will be more coffee than in 2021 (around 47 million bags) but still less than in 2020 (63 million bags). The prospect is more positive when you look at the nodes forming on branches where the trees are not bearing fruits for this season. As coffee grows both vegetatively and productively at the same time, the density of nodes shows that there is a potential for an explosion of flowers come September and October. This is why there is talk of another record crop in 2023 when plants affected by the frost will also be back to production. As always, it all depends on the weather…

Augusto of Capadócia Coffee points out to aborted buds and new growth for the coming season (Photo: Algrano)

The frost burned the futures market
The futures market has also been affected by the frost in Brazil. Before 2021, most producers would have some percentage of their coffee pre-sold as futures to secure income for the time of the harvest. Some of them would have more than 50% booked pre-pandemic. Growers had to deliver coffees sold at cheaper prices to the benefit of capitalized players such as large co-operatives, big exporters and transnational importers. This is why roasters can still find low-priced coffee from 2021 through some importers - though it won’t be the case for long. For farmers, the experience was traumatic, to say the least. Now, they say that “the frost burned the futures market” and few are booking their coffees in advance. 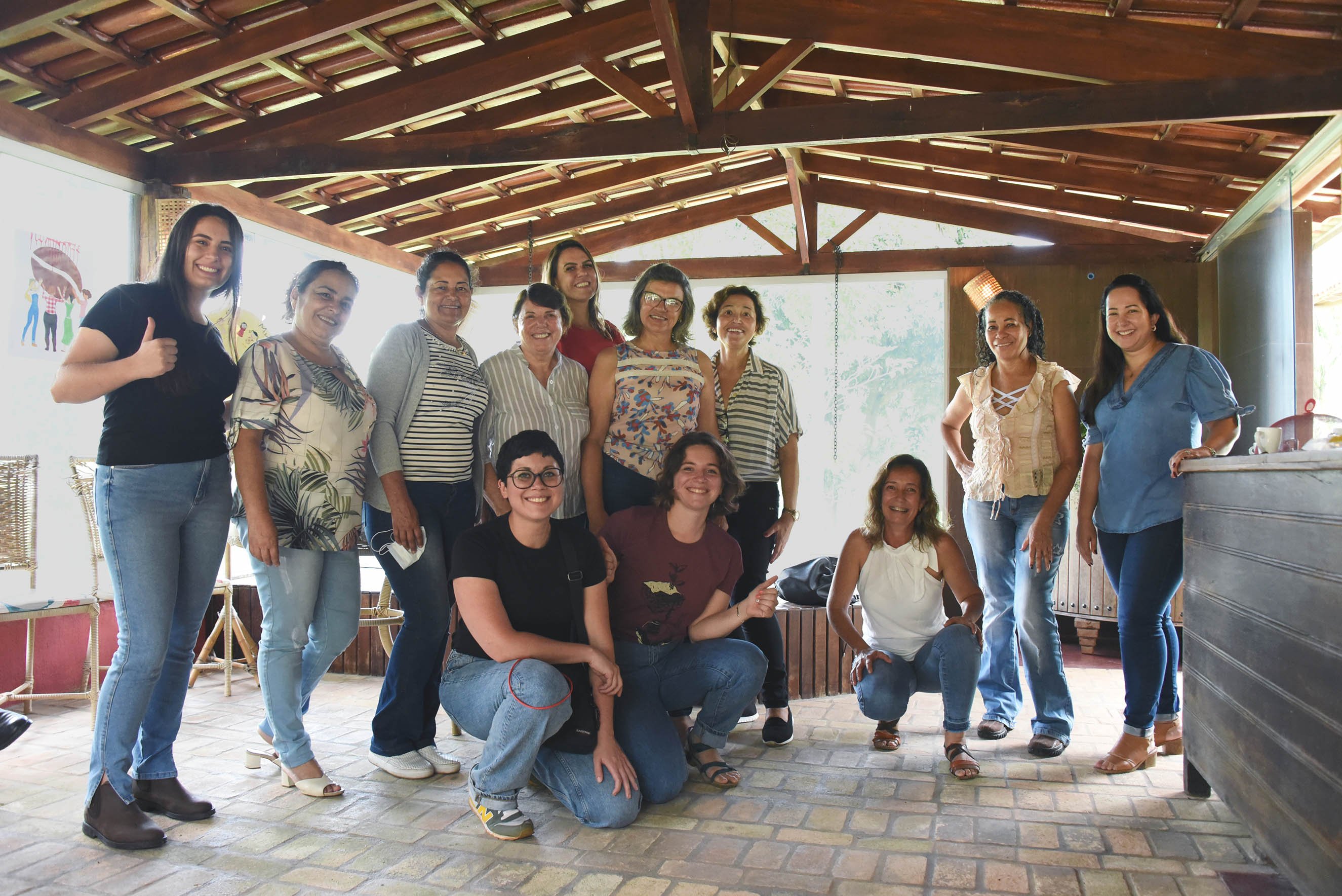 Another concern for farmers is the cost of fertilizers, which rose more than coffee prices. If producers reduce the number of times they apply inputs to their plantations, we’re likely to see yields suffering in 2 to 3 years. Events like this can trigger new price cycles and create more instability for the market. If 2023 has a bumper crop and prices go down, it shouldn’t stay like that for long. 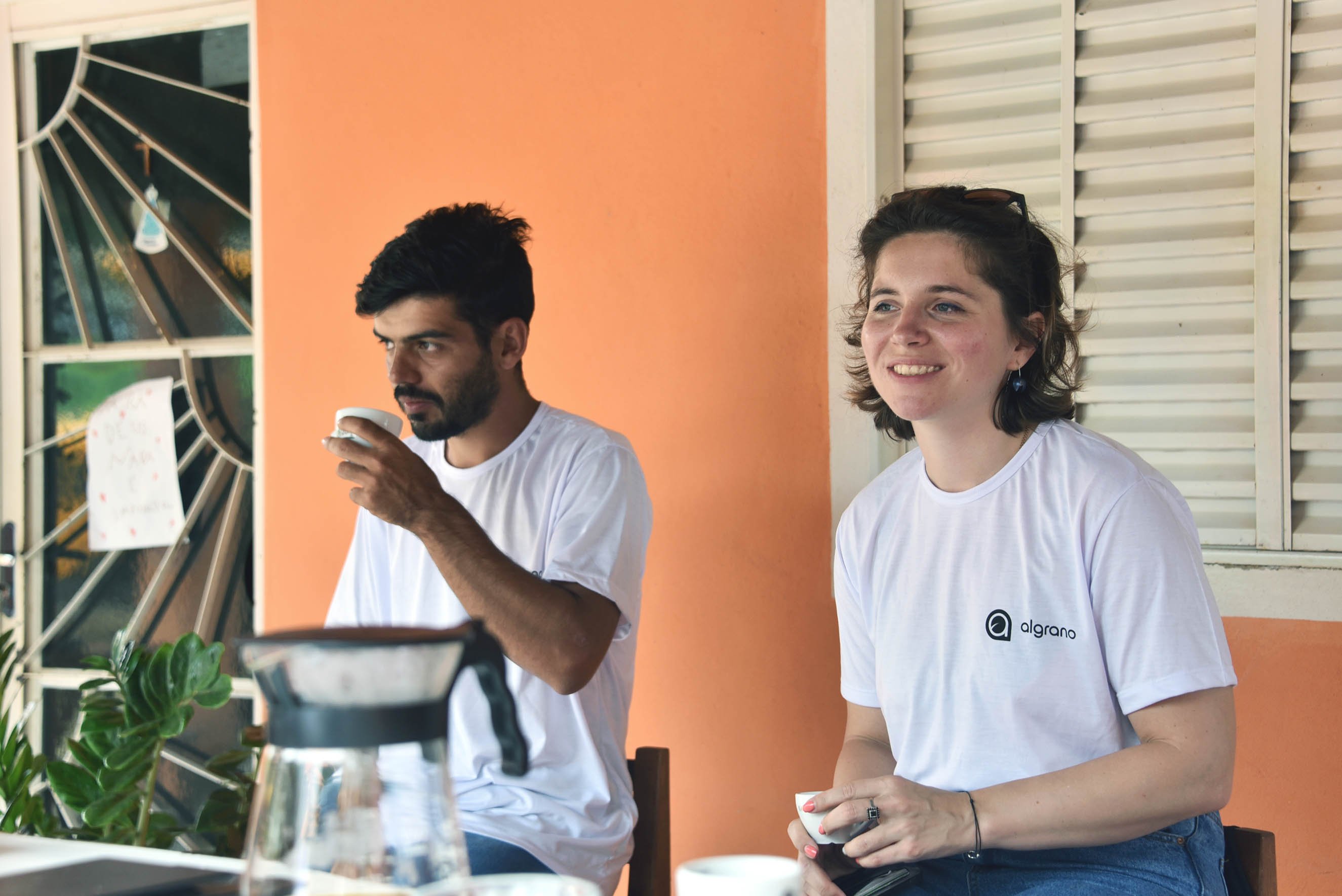 Augusto and Maria. Augusto normally sells 20% of his crop as futures to secure income. Now, he says, no one is doing it (Photo: Algrano)

Algrano Verified Sellers, poster boys for direct trade
We were happy to see that our partners are still focusing on quality and that these recent events have strengthened their beliefs on direct trade. We observed that the farms and co-ops that are verified on Algrano are in positions of local leadership and carry the message that relationships are the way forward to other growers.

Sancoffee has created an Impact Committee and is supporting a number of small associations in developing their quality and exporting with the support of EMATER-MG (Company for Technical Assistance and Rural Extension of the State of Minas Gerais), Klem is instigating new farmers to go organic, APAS continues to be the direct trade poster co-op in South of Minas, with former president Alessandro Hervaz now pushing Coopervass to do the same. 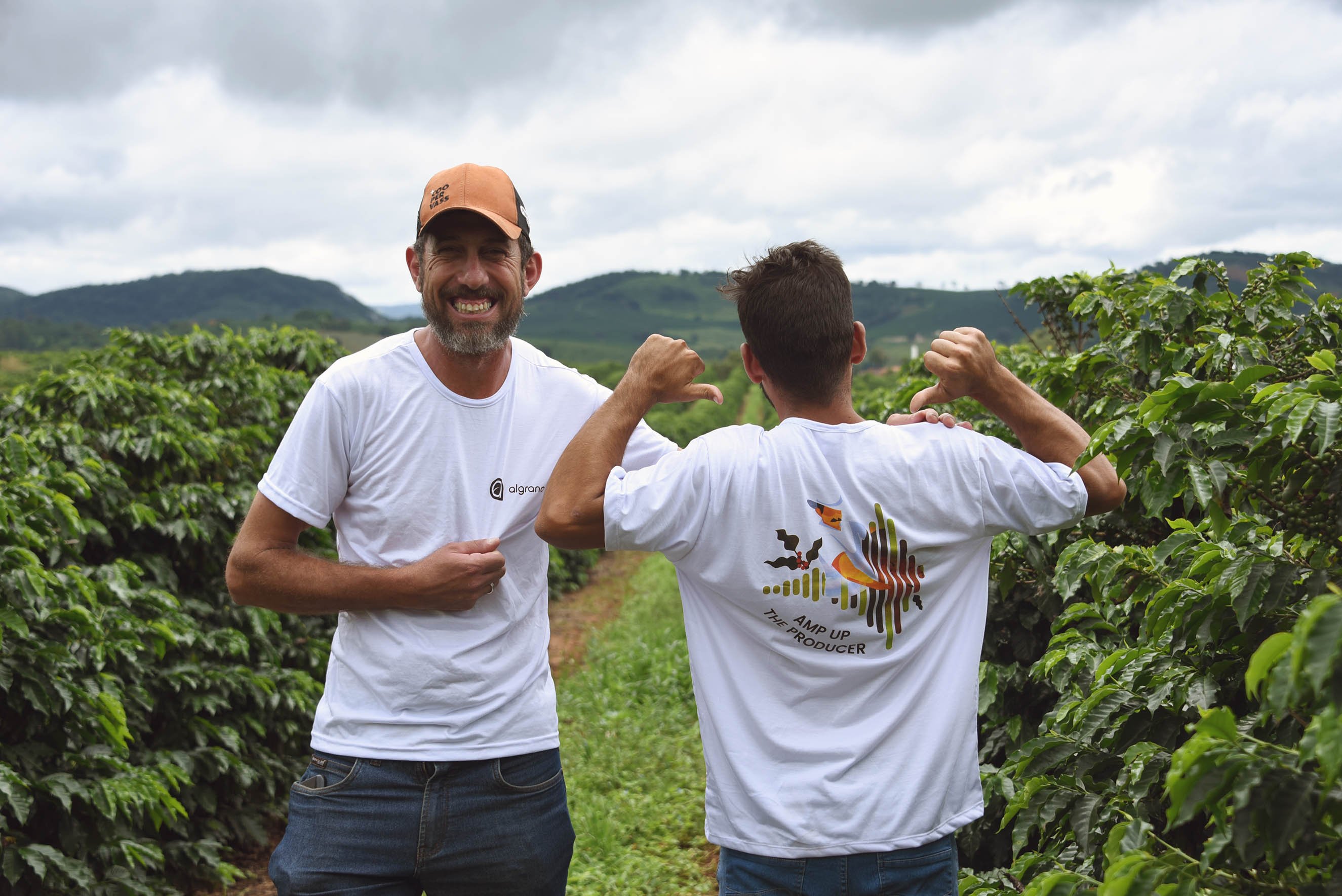 Despite countless bumps in the road (literal and metaphorical and crashed cement trucks blocking the way, we were happy to confirm once again that our partners’ values align with ours. We couldn’t ask for better people to work with. We thank everyone for the hospitality, the cuppings, the journeys on the back of pick-up trucks, the bottles of cachaça, the late-night conversations, and the cheese bread. 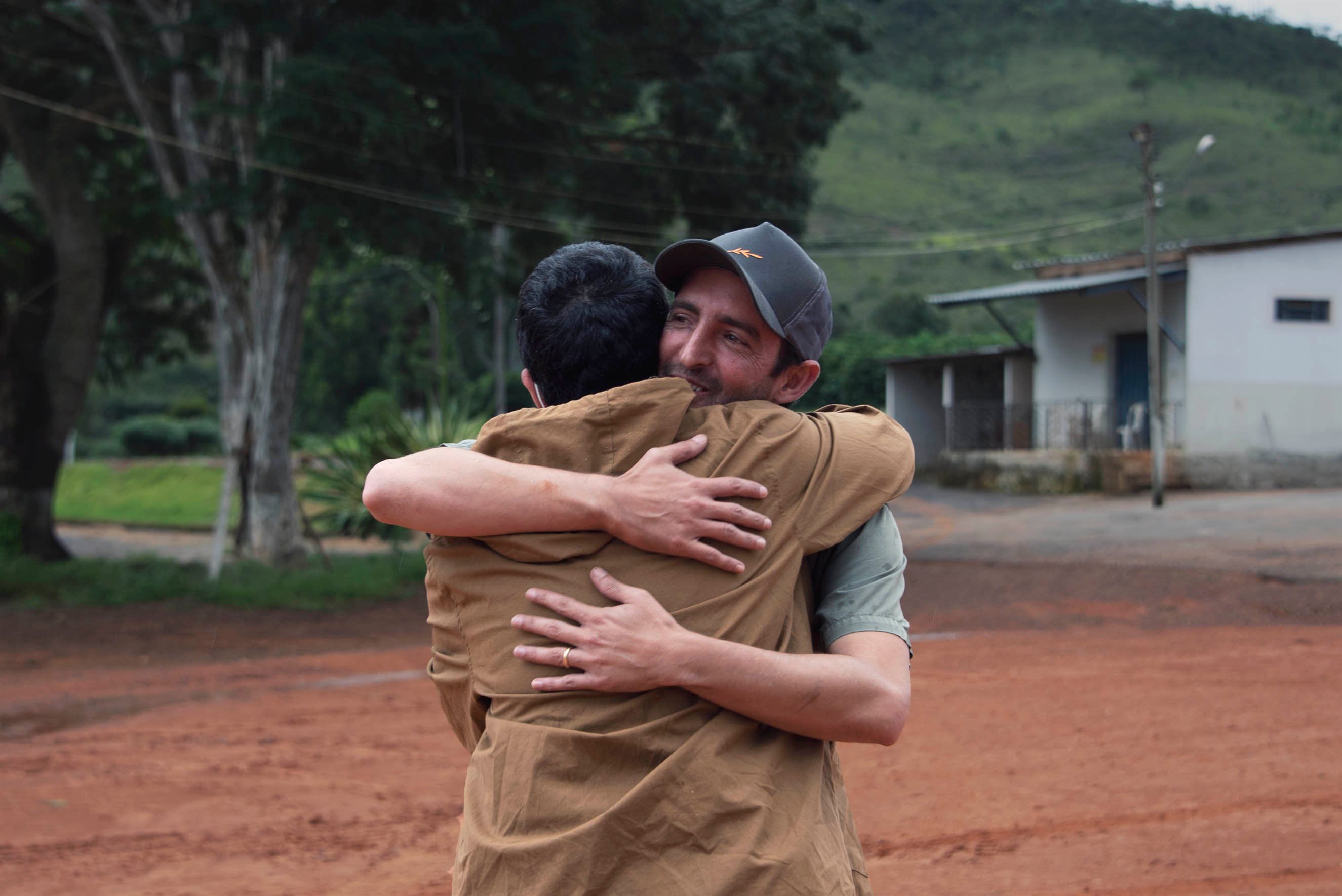 We got a warm welcome from Heron at Canta Galo Coffee, Campos Altos (Photo: Algrano)

Our special thanks to Juan Vargas of Klem; the Dutra brothers Ednilson and Walter and their right hand Pedro Dutra at D’Brasil; Rafael Vinhal of Vinhal Cafés Artesanais; Bruno Antonio Franco of Inhame Farm and Capeca (and his family); Heron Reger de Carvalho Junior “Juninho” of Canta Galo Coffee (and his mother Marina); Fabrício Andrade, Allan Botrel and Ana Claudia Silva of Sancoffee, not to mention Henrique Dias Cambraia of Samambaia Farm for letting us stay in his home; the whole APAS crew, especially Maurício Hervaz and Augusto Borges Ferreira for helping us off the mud; Alessandro Hervaz and the Coopervass team.

Who benefits from the panic in the current coffee market?

We have all been seeing and talking about the recent frost that hit Minas Gerais last week. Analysts are already making ...