Meet the farmer: Alessandro Hervaz talks about the Brazilian harvest and his approach to naturals

From the US Marines to an island in Indonesia: meet Troy Kiper of Bright Java Coffee Sep 27, 2021
The nagging startup feeling of a former banker - meet Florian, our new CFO Aug 13, 2021
What’s happening with the price of coffee in Brazil - and what you can do about it May 11, 2021
How to break the link between specialty and the C-price & other questions roasters are asking right now Aug 10, 2021
How Bell Lane and Canta Galo built a relationship from a 3-bag order Sep 29, 2021
Categories | Subscribe | Populars
Written by algrano
on October 18, 2019

Alessandro Alves Hervaz is the man behind some of the highest-scoring lots in this #BrazilianDiscoveries. He has worked with coffee from 16 years of age when his father, Luiz Hervaz Lobato, bought the first family farm in Mantiqueira de Minas in 1993. In 2006, alongside a group of farmers, he founded APAS (Associação dos Produtores do Alto da Serra) and acted as the association’s president for 7 years. 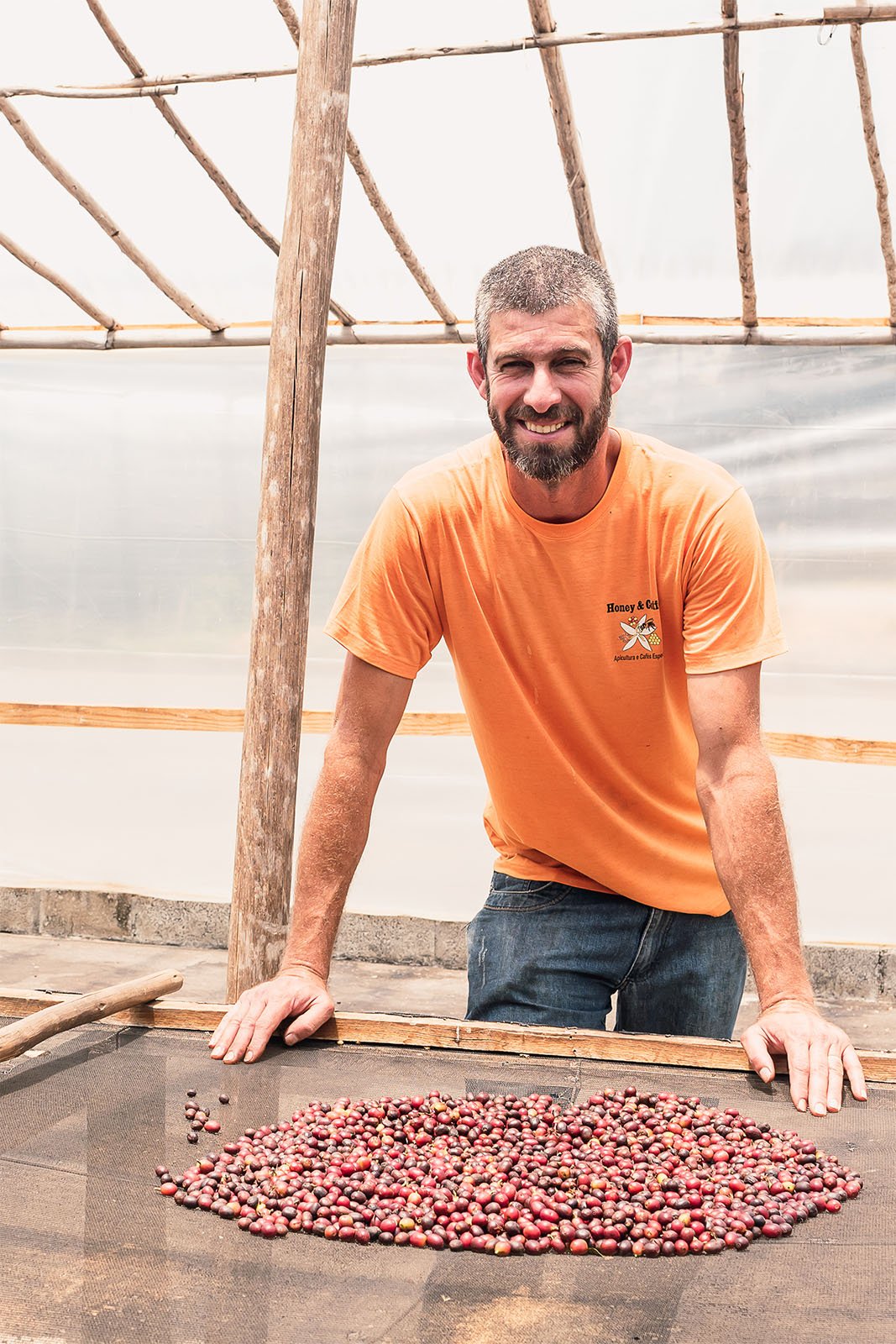 Today a seasoned farmer, Alessandro has a personal approach to post-harvest processing that has lead him to win awards and place amongst the 10 best in the two previous editions of Brazil’s Cup of Excellence - and maybe this year’s too. Results will be announced this coming Saturday. Harvest in Brazil hasn’t been easy this year. However Alessandro is making the most of it. He speaks openly and honestly about his journey in coffee, the challenges he faced, the harsh weather conditions and why he is investing in direct trade despite the financial risk.

algrano: How did you get involved in specialty coffee?

Alessandro: When we founded APAS, we hoped to form a group that would make us stronger and lead to better quality and sales. We were already focusing on quality when, in 2010, buyers started asking for specialty coffee and the first competitions appeared. The APAS producers were standing out and attracting customers, showing their potential. In 2013 we received our Fairtrade certification and started using the extra resources to invest in micro lot projects.

algrano: What was the turning point in this trajectory? Why?

Alessandro: Things changed for me 4 years ago, when I started cupping my coffees. It’s one thing if someone says you have a good coffee and it’s something else to know how good it is. I attended some courses, including the Pre-Q Grader. What helped was cupping with my brothers (also coffee farmers) so we could share our impressions and improve our palates together. This is what led me to realise how much the post-harvest affects the quality of the coffees and how. It also helps you understand the potential of your raw material. 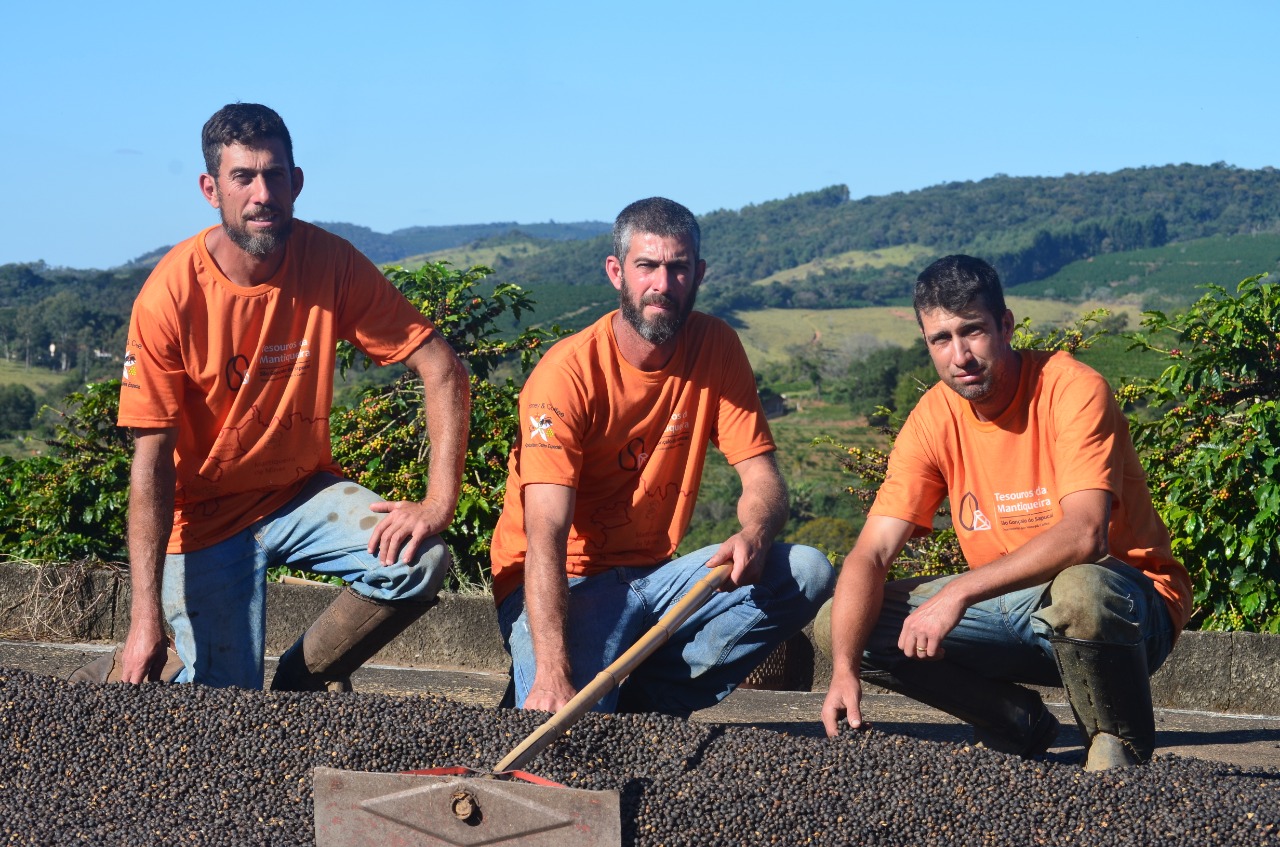 algrano: Do you remember a situation when that knowledge was crucial?

Alessandro: Yes! Once, a Q Grader classified a pre-milling sample as a “bebida dura”, a category in Brazil’s grading system for harsh and bitter cups. If I were to accept this I would’ve sold my coffee cheap and fast to get rid of it. But I knew that the season had been really hot and some beans ended up with more moisture than others. I had a good feeling that the result had probably been caused by one unripe seed in the cup and that milling and sorting would solve the problem. I was right. After milling the coffee I got a really good result and sold it well. If I didn’t know how to read the cup, I would be lost.

algrano: You said cupping influenced your post-harvest. Can you speak more about that?

Alessandro: Well, everyone used to preach that the best way to dry cherries was to spread them in thin layers. But cupping showed me that when I started the drying process using thicker layers the cup turned out to taste better. I realised that it makes for a lighter fermentation in the beginning and the result is more sweetness and body in the cup. Even green beans (the ones that haven’t matured completely) end up tasting better and you can remove the astringency. Sometimes the greens even enhance the final flavour profile. It is time-consuming though. Some people dry their coffee in 15 days or take them to the mechanical drier. My coffees can stay on the patio for up to 40 days. 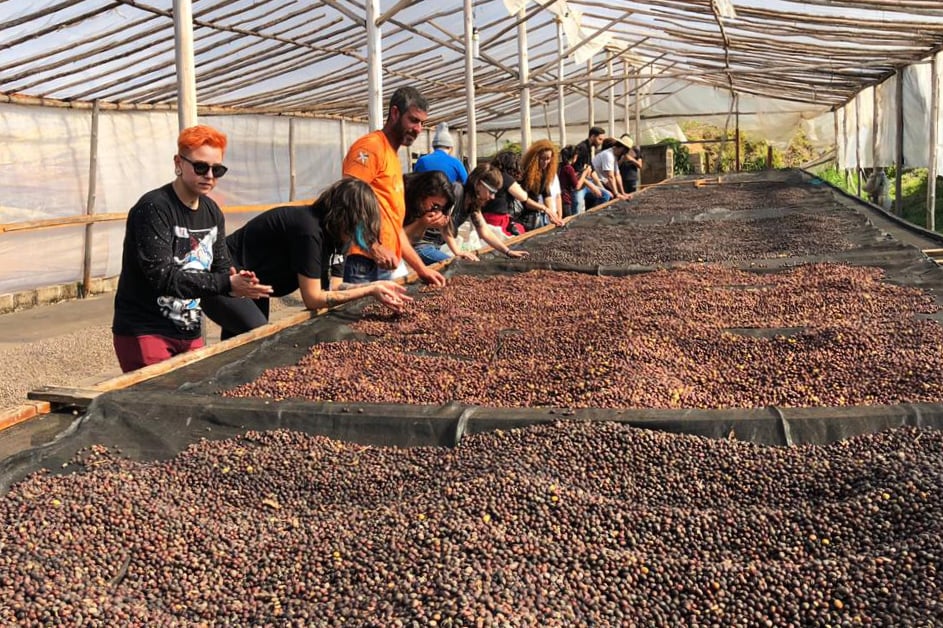 Alessandro: That will be the yellow catuaí, the A-466-1 or BR-209. It has a lot of sweetness: tastes like honey and fruit. That and the BR-211 Mundo Novo were the best coffees I produced after the lot I sent to Cup of Excellence. I was happy to be able to improve the potential of the coffee this year because the harvest was very difficult and the cherries didn’t have a lot of pulp. We had a lot of rain in August 2017 and multiple flowering periods in 2018, so the harvests have been irregular. We also had rain in the early harvest this year, leaving most farmers with a few big problems: cherries were maturing at different stages, selective picking was harder and lots of people faced what we call “fungo do riado”, which causes a phenolic defect. On lower regions where the rain was worse, the cherries were constantly getting wet and dry, wet and dry... Their skin ended up cracking open and humidity got in the fruit. That’s why some coffees taste phenolic.

algrano: How did the bad weather affect you?

Alessandro: I have farms from 1000 to 1500 m of altitude, so we escaped the heavier rains. The cherries didn’t develop as well as they could though. I waited as long as I could to pick them so they would have more time to mature, but when they have less pulp there is less raw matter to ferment. Though in higher altitudes you can still produce good coffees. My best lots this year were the “boias” of altitude. Boias are the less dense beans that dry longer on the tree and start fermenting even before picking. They can be amazing, but you need to nail the post-harvest. Our slow drying process is great to help boias develop further.

algrano: What are the main challenges you face at the moment?

Alessandro: Well, logistics this year should be fine as we are not anticipating strikes or problems at the ports, so I would say the main challenges are to deliver a good product despite the weather and to develop relationships with roasters. Brazil has produced great coffees in the past 3 years yet when we were holding more coffee than there was demand producers’ motivation began to fade. I fear that will happen again next year because we are having better weather again and the flowering period will be more uniform. If the prices go even lower, farmers might start going backward. That is why selling direct is a good thing.

algrano: Can you give an example to explain why that is?

Alessandro: Hannes Fendrich from Coffee Circle in Berlin, Germany, first bought coffee from me through the algrano platform a few years ago. He then came to visit, kept buying and even prepared a workshop for us to show how he uses our coffee at Coffee Circle for espresso and what his recipe is. That also helps me understand my coffee. I now know what he likes and produce coffee specifically for him. It is more expensive to grow coffee like that, but it is a guaranteed deal. It is also really satisfying to receive a package with your name or your photo on it. It’s like a trophy. I’m not going to be a hypocrite and say the money doesn't matter, but recognition is priceless. Our coffee has been to places we had never thought of before and has taken us further than we ever thought we would go. 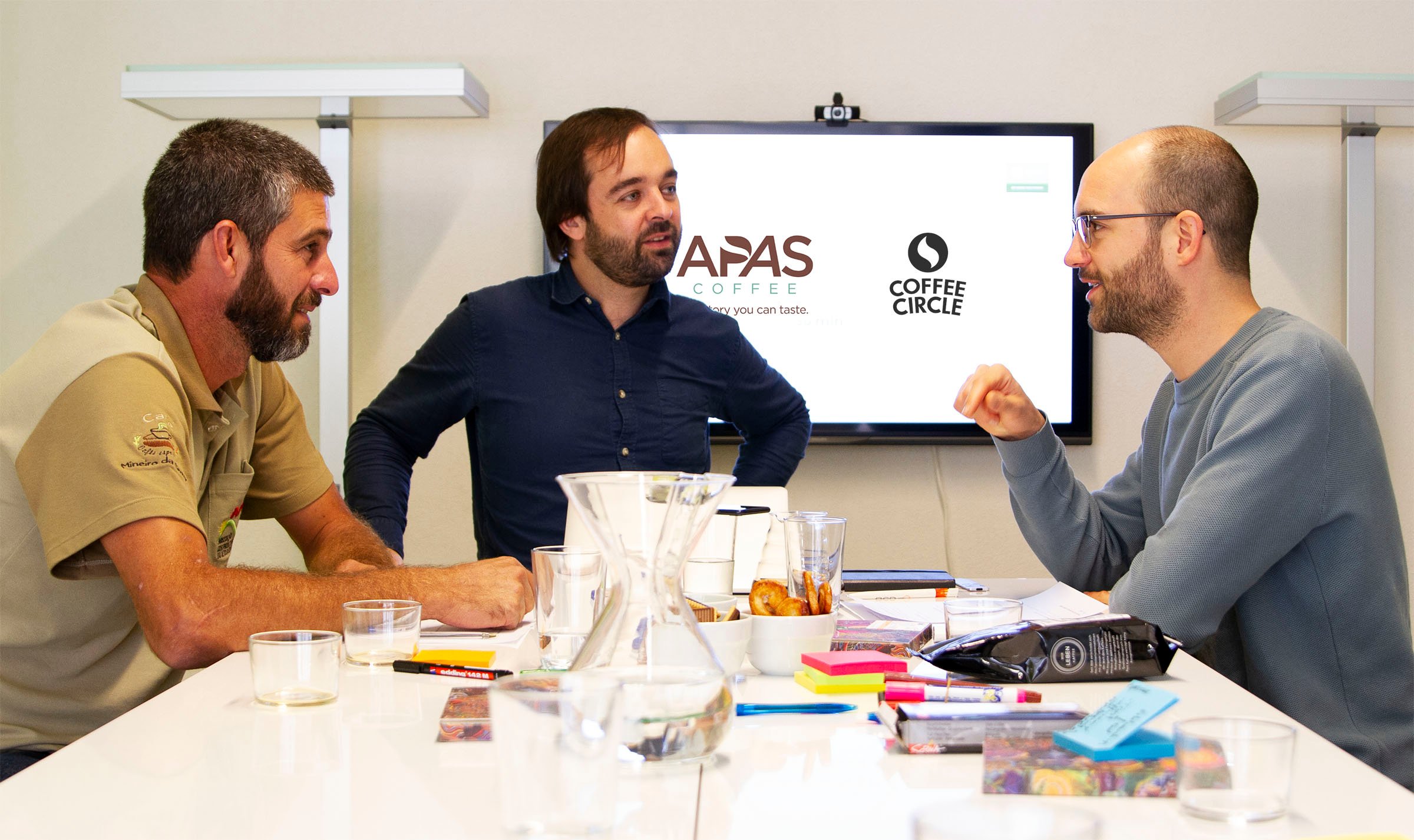 Alessandro & Hannes during a workshop at the algrano office 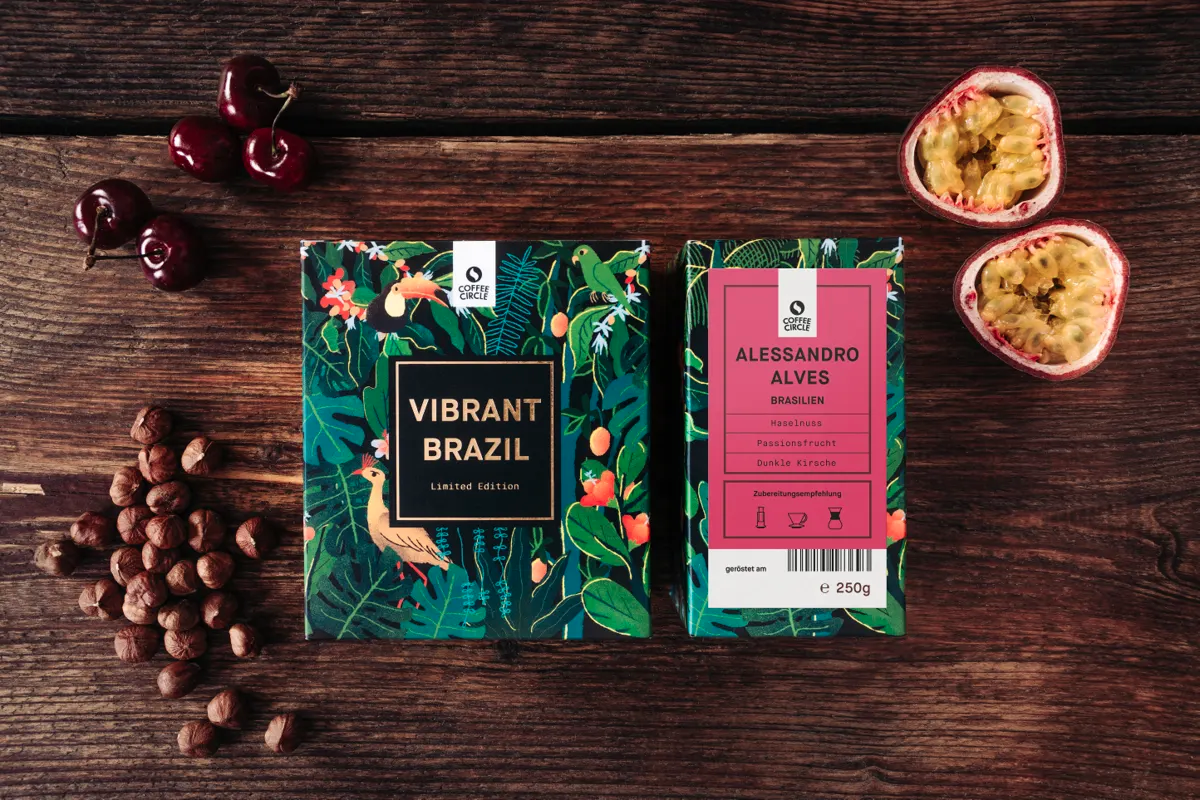 algrano: What about the lot you sent to Cup of Excellence this year?

Alessandro: I was only able to produce 15 sacks of it this year. It’s a yellow bourbon from my higher farm, Grotão. We scored it at around 90 points and it’s full-bodied, sweet and tastes like fruit juice. I used the same post-harvest process on this coffee and my other lots. I remember it used to be my dream to sell coffee at COE’s auction and now it’s my third consecutive year amongst the finalists. In 2017 I scored 89.56 placing 7th and in 2018 90.15 in 8th place.

algrano: Roasters talk more and more about transparency and price crisis. Is there something you think they should be aware of?

Alessandro: The best sales I do are direct ones. When dealing with big companies, a lot of producers end up selling their coffee “bica corrida” (not sorted or graded) for R$ 420 a sack even when the coffee is good. An 87 lot goes for R$ 550! When you prepare the coffee yourself or through your co-op as I do with APAS I can get at least twice that price. I have been preparing my coffee through APAS for the past 3 years to improve the quality despite knowing that selling to the specialty market takes time and affects my cash flow. I can determine the price myself and I get good deals of up to R$ 2.000 a sack.

Who benefits from the panic in the current coffee market?

We have all been seeing and talking about the recent frost that hit Minas Gerais last week. Analysts are already making ...