From the US Marines to an island in Indonesia: meet Troy Kiper of Bright Java Coffee Sep 27, 2021
The nagging startup feeling of a former banker - meet Florian, our new CFO Aug 13, 2021
What’s happening with the price of coffee in Brazil - and what you can do about it May 11, 2021
How to break the link between specialty and the C-price & other questions roasters are asking right now Aug 10, 2021
How Bell Lane and Canta Galo built a relationship from a 3-bag order Sep 29, 2021
Categories | Subscribe | Populars
Written by algrano
on March 16, 2020

The village, located in the higher part of San Pedro de Copán town, is rich in coffees and characters. Below are some shots of the people behind the Honduran Discovery and their stories. 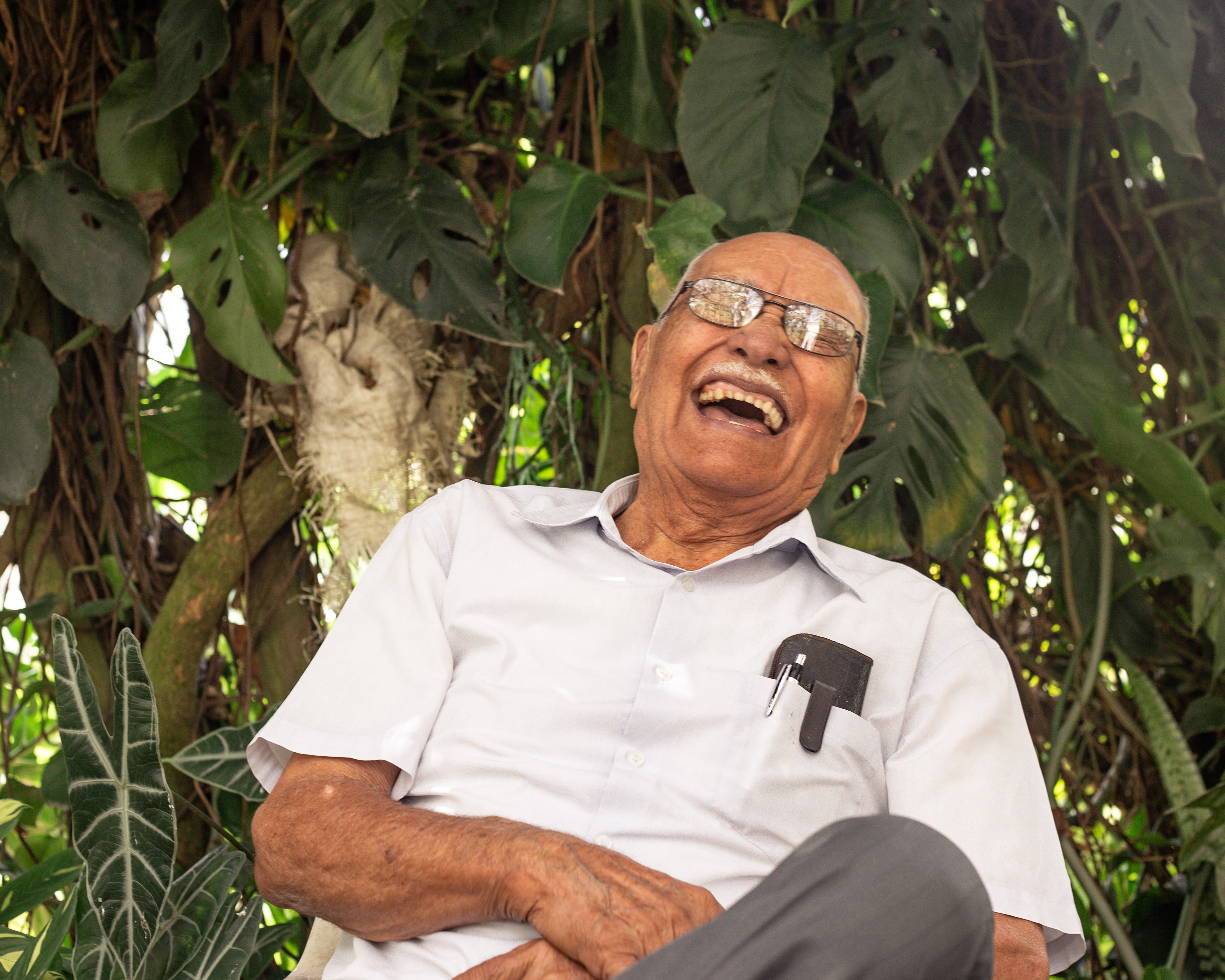 Atanacio Rodolfo Romero, 88, also known in Capucas as “El Abuelo”. Deeply involved in the Honduran co-operative movement, he is the son of the first man to take coffee to the village. Atanacio was one of the founders of Ahprocafe (Asociación Hondureña de Productores de Café) and travelled to Costa Rica in his 30s to learn better cultivation practices, which he took back to Capucas. 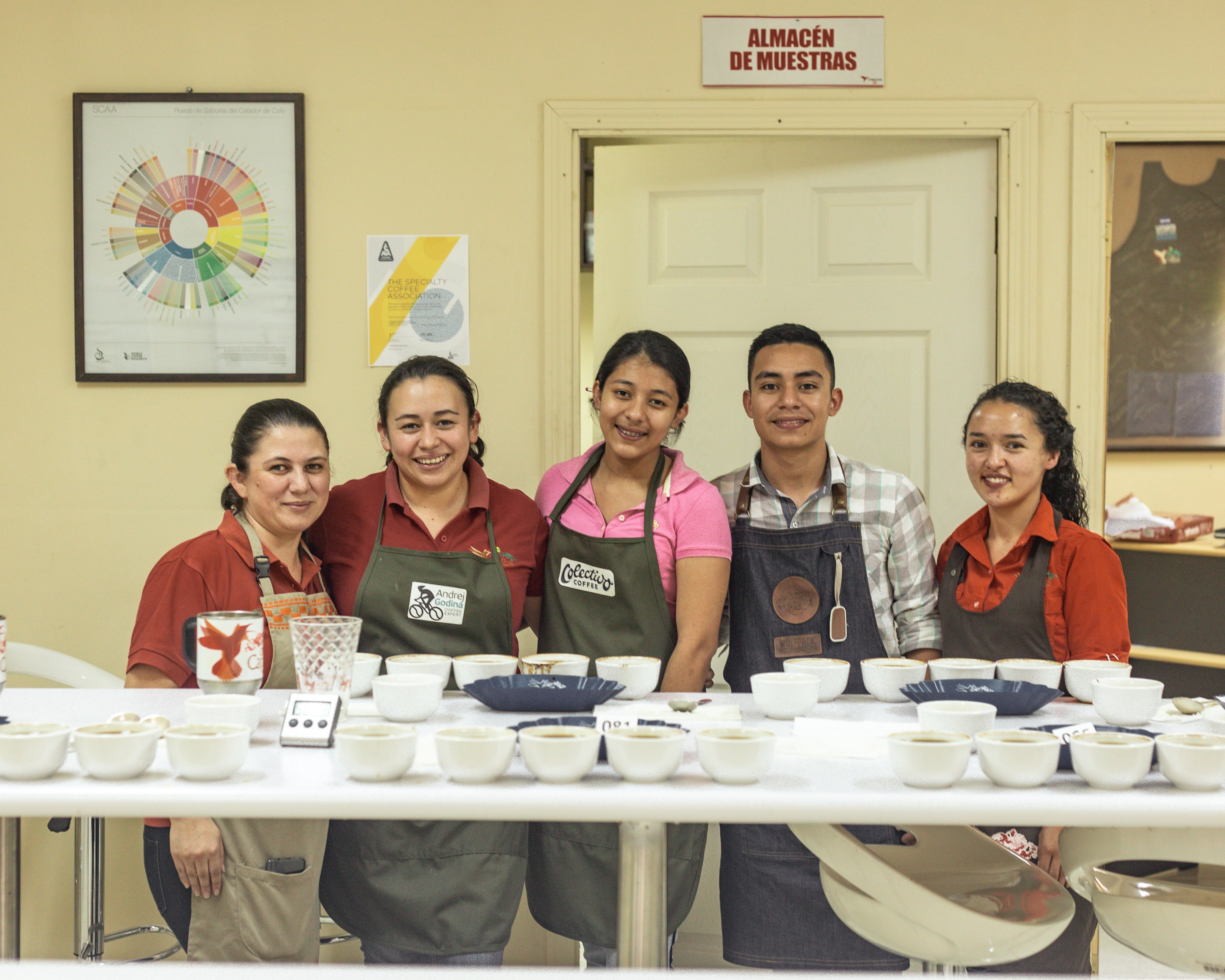 Capucas quality control team is run mainly by women and headed by farmer and Q Grader Iris Alvarado (left). Iris is also one of founding members of a group of female growers that roasts and sells their coffee in Tegucigalpa and San Salvador. One of two daughters in a male-dominated family, Iris managed to prove to her father and brothers that women can be great farmers and produce outstanding coffee. 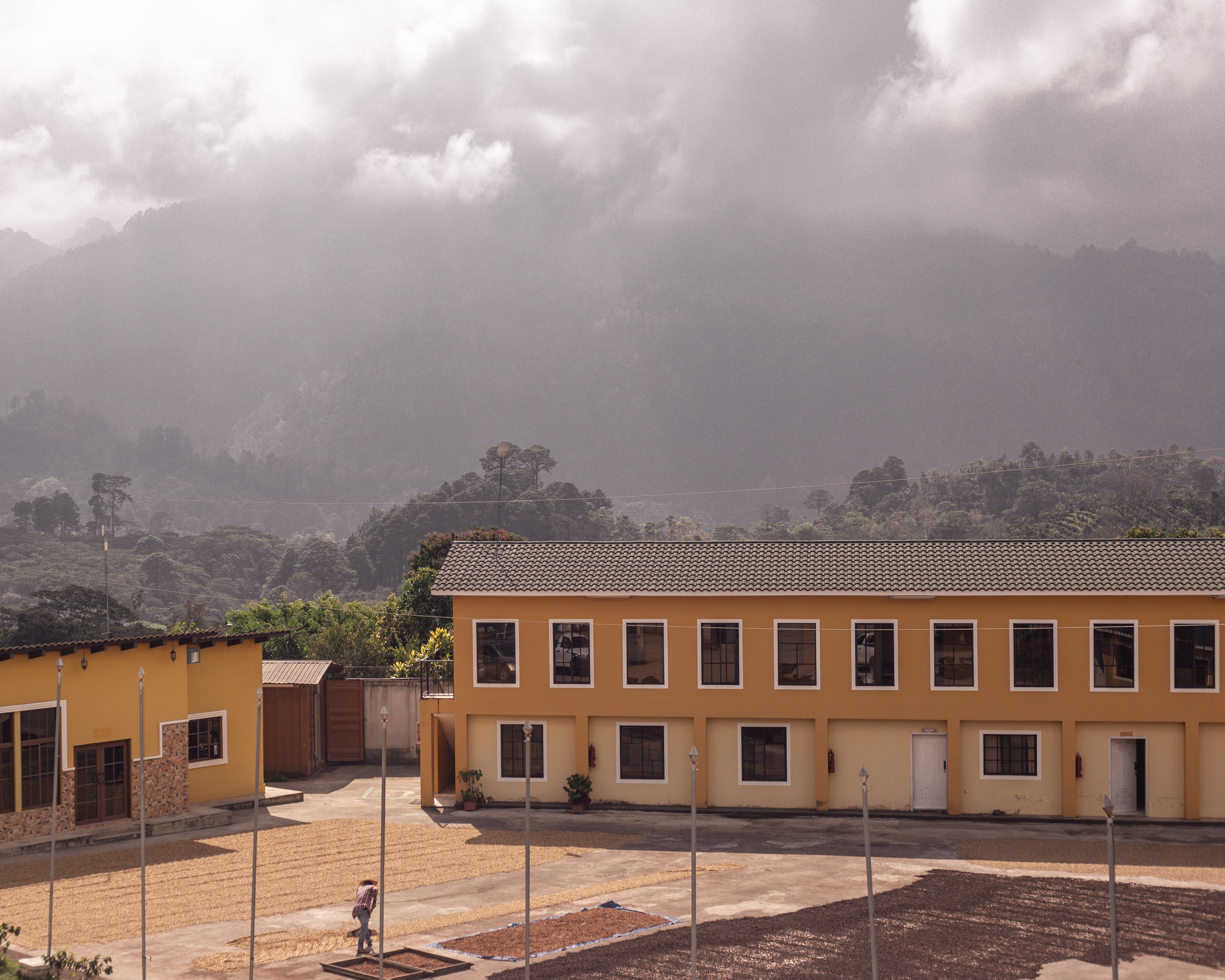 Capucas was created in 1999 by a group of small growers from Las Capucas and other villages of San Pedro de Copán, all around the Celaque mountain range. Today, the co-operative has 900 members, including growers from the town of Corquín. Las Capucas is named after a bitter-tasting plant that is consumed by the locals, similar to pacaya and amargo.

The co-operative has a big polytunnel to dry parchment. The “secadora solar” is ideal for Capucas’ humid weather. All micro-lots processed by the co-op are brought here, where they can stay for 15 to 30 days. A team of workers is constantly moving the beans with a rake to ensure even drying. 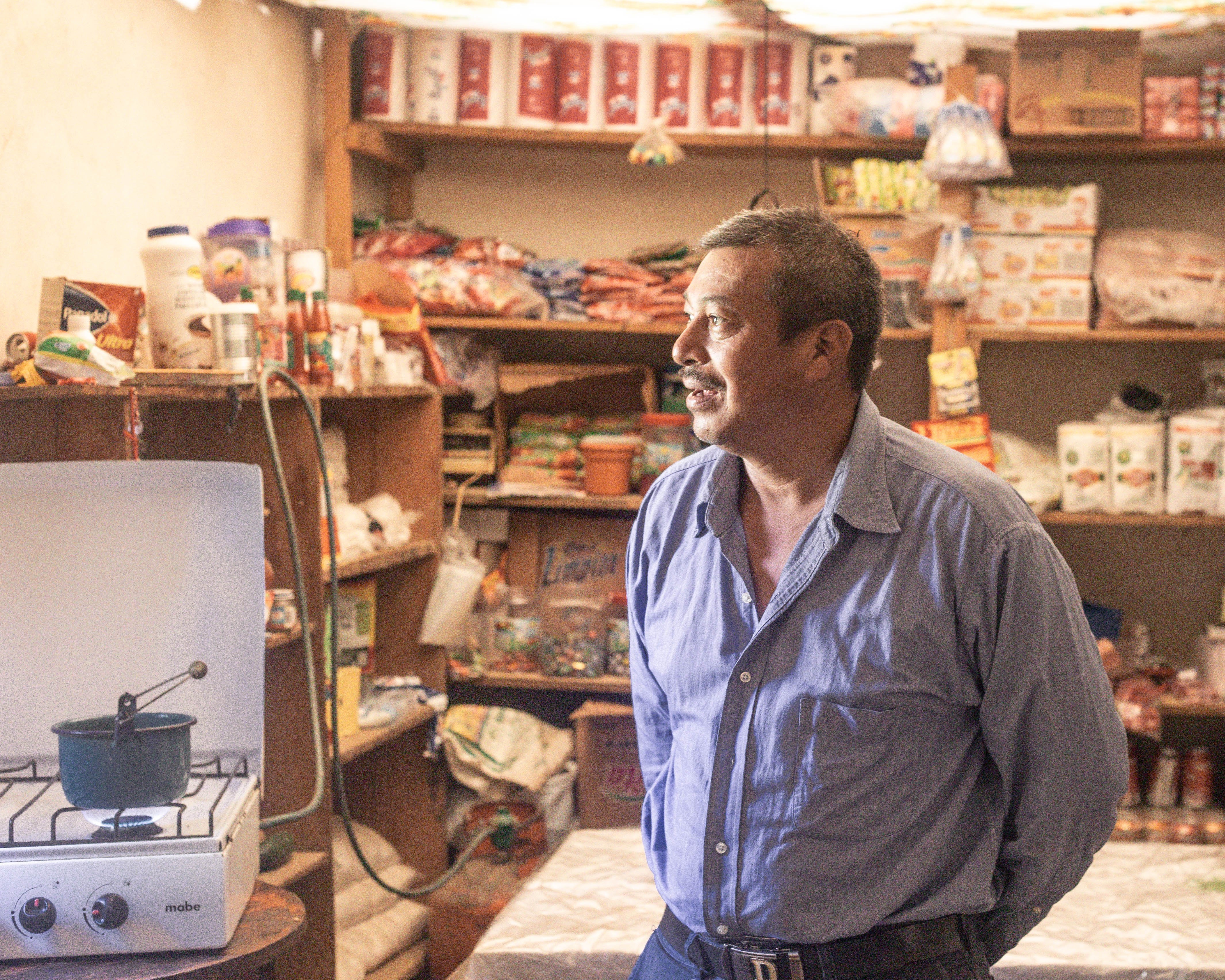 Don Enrique in front of his groceries shelf. The grower sells basic household products from his kitchen to his neighbours. His house sits at the end of a dirt track with difficult access conditions, making it harder for him and other local farmers to travel to the nearest town and restock. 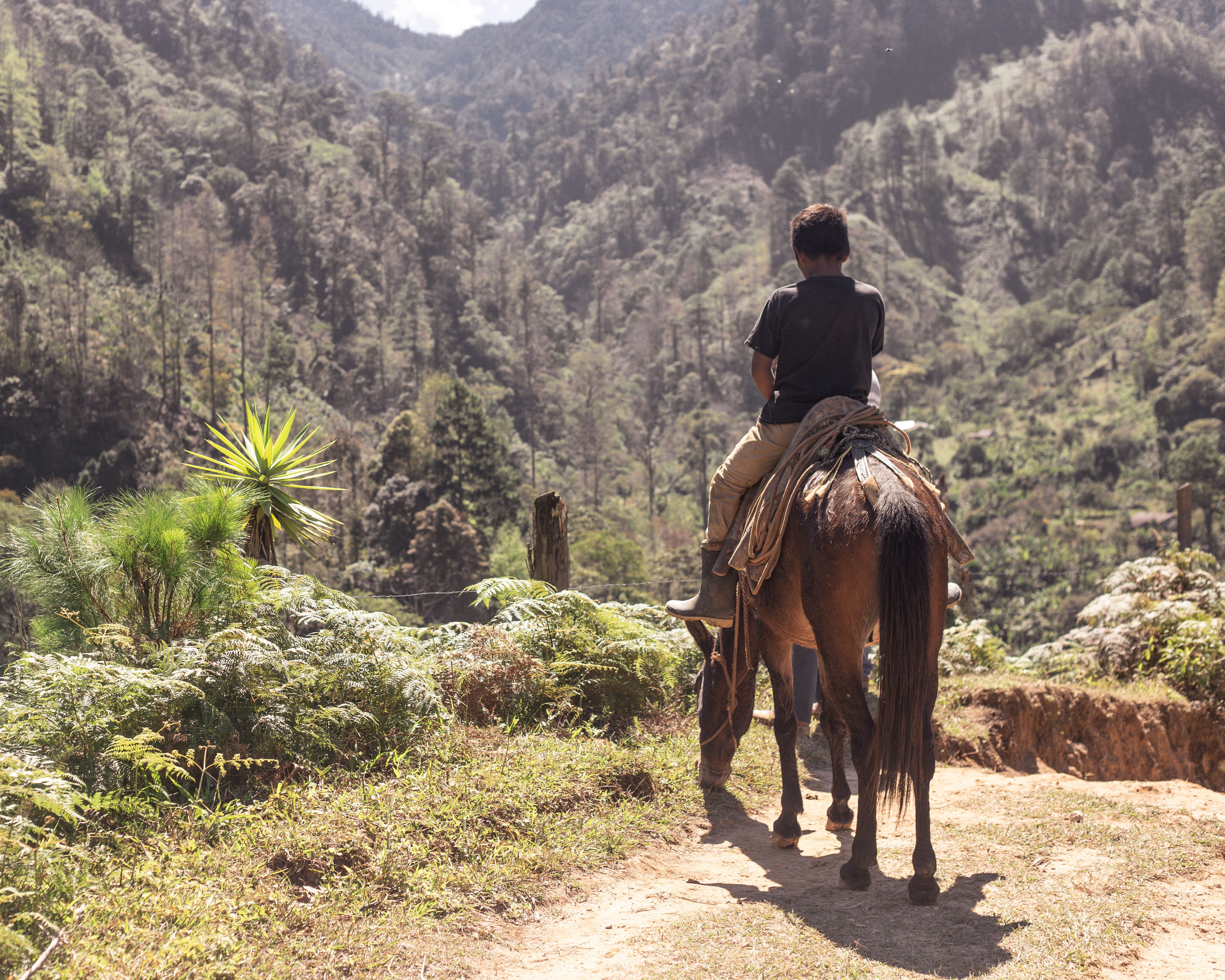 There is a steep road between Don Enrique’s house and his plot. Muñeco, the mule, is the transport of choice for coffee (and eventually for the couple’s adoptive kids too). Enrique, who’s more than 50 years old, walks up and down the hills on foot every day.

The liquidambar, native from North and Central America, is one of the symbols of Honduras. It produces a resin similar to the maple tree, which Capucas is also currently studying for commercial purposes. The photo was taken on a plot belonging to Iris Alvarado’s father, where there is a clearing surrounded by coffee trees and liquidambars. Francis Melgar came back from the United States around the time of the leaf rust crisis. Like many other farms, Finca El Emperador was devastated by the fungus outbreak. Since then, Francis decided to plant his trees in rows with 2 meters of distance from each other in what he calls “Brazilian style”. He has no intention - or means - to mechanize picking. The distance helps to prevent the rust propagation. 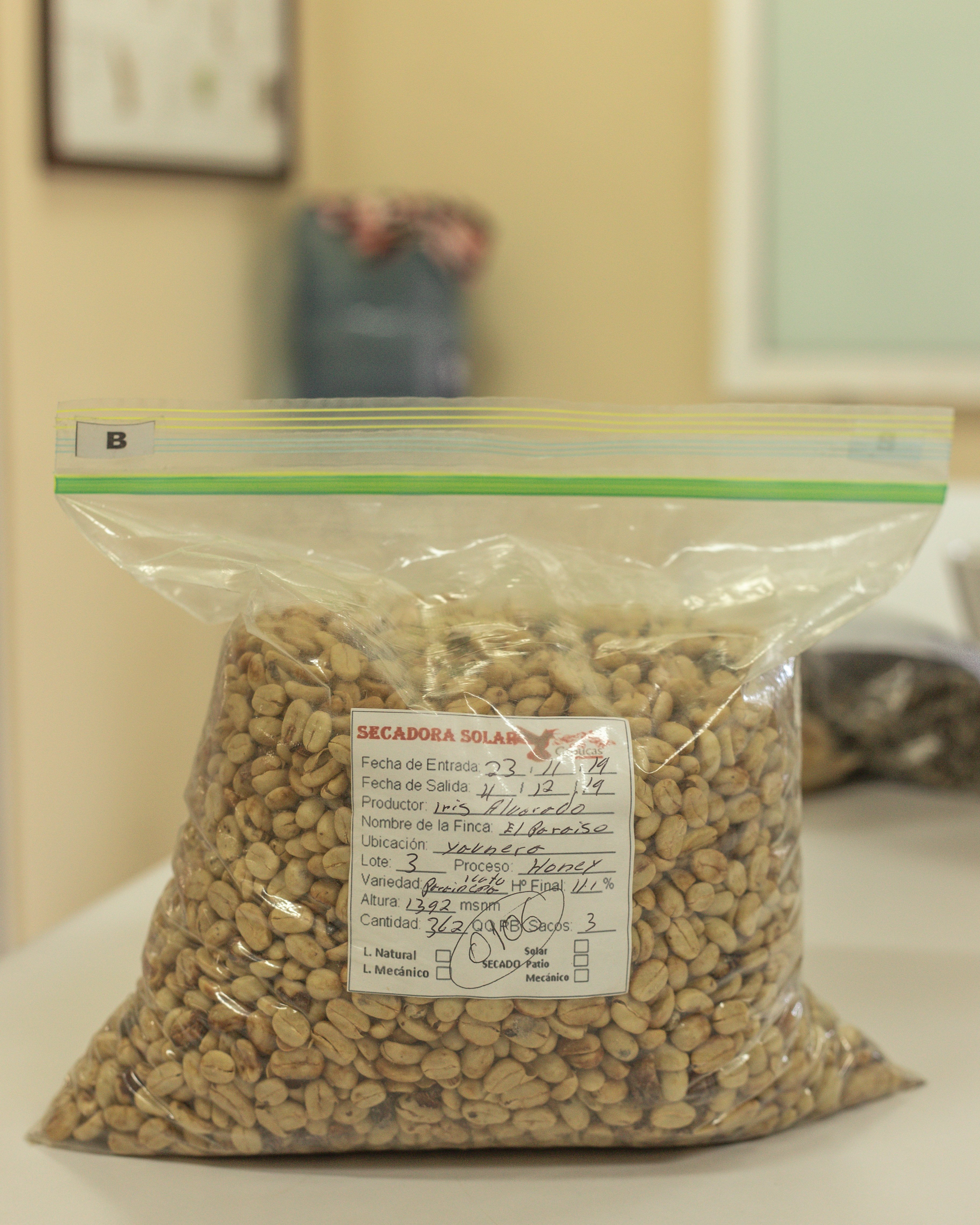 A sample bag with parchment from Iris Alvarado’s farm. She says that the date of entrance and exit of each lot on the patio or polytunnel are the most important for quality control. It informs her of how long it took a lot to dry and therefore how long the coffee will keep. It’s also part of her job to recommend better practices to growers based on their raw material. “Green coffee analysis is like a radiography. A broken bean means the depulper is not calibrated or that rake is not being well used, for example. A wrinkly bean can mean hydric stress…,” she explains. 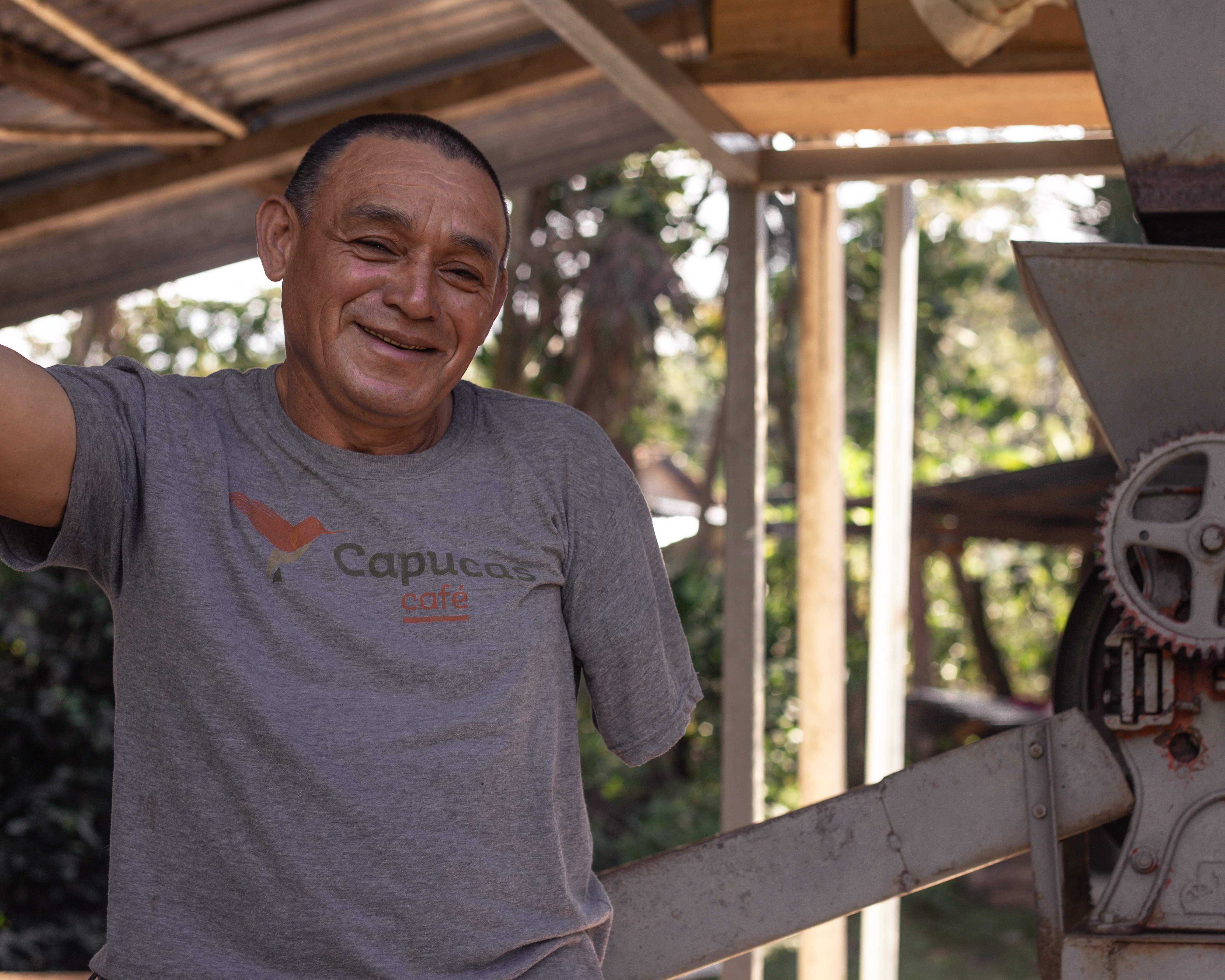 Panchito has a small wet mill where he processes micro-lots from his farm and of neighbours. He still sells his coffee via the co-operative, but processing always fetches better prices. A known figure in Capucas, the former soldier says processing changed his mentality. “Some people think they can get better prices without working harder but that is not how it works. It is worth it, though. I had a very good customer for a good number of years with whom I negotiated directly,” he says. 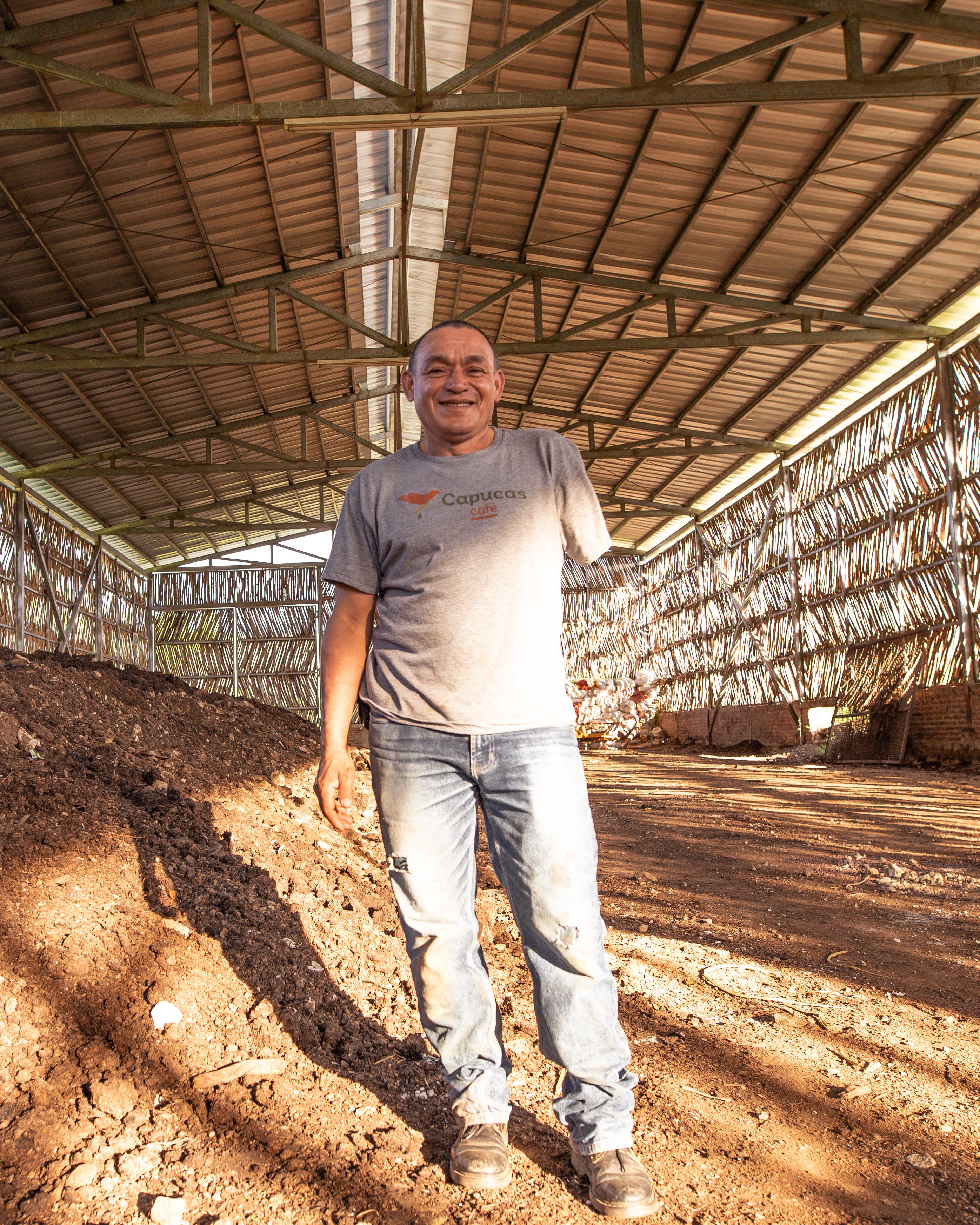 An organic certified co-operative, Capucas produces its own compost and fertilizers, which are supplied to local farmers. Fertilizing multiple times during the year is a practice encouraged by Capucas because well-nourished trees are more rust-resistant regardless of the variety. As nutrients are better absorbed when the soil is moist, the trick now is how to coordinate the nutrition periods with the erratic rains... 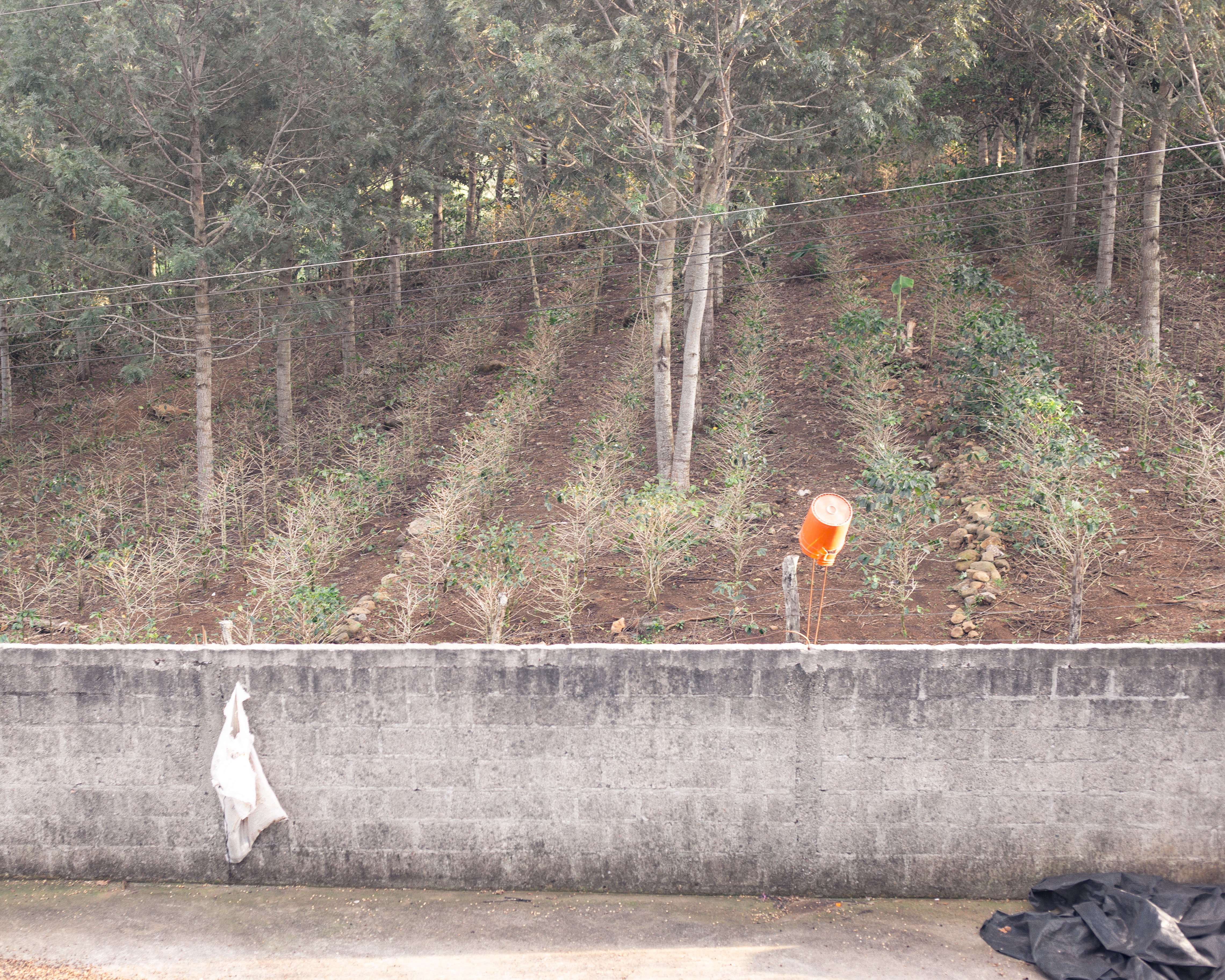 A sad sight. Marita’s balcony in Las Capucas faces a plot devastated by the leaf rust fungus. The farm was completely abandoned by her neighbour. Found in virtually every farm in Capucas (and all over Central America too), signs of the fungus are not always a reason for worry. However, the loss of leaves anticipates bad production levels. 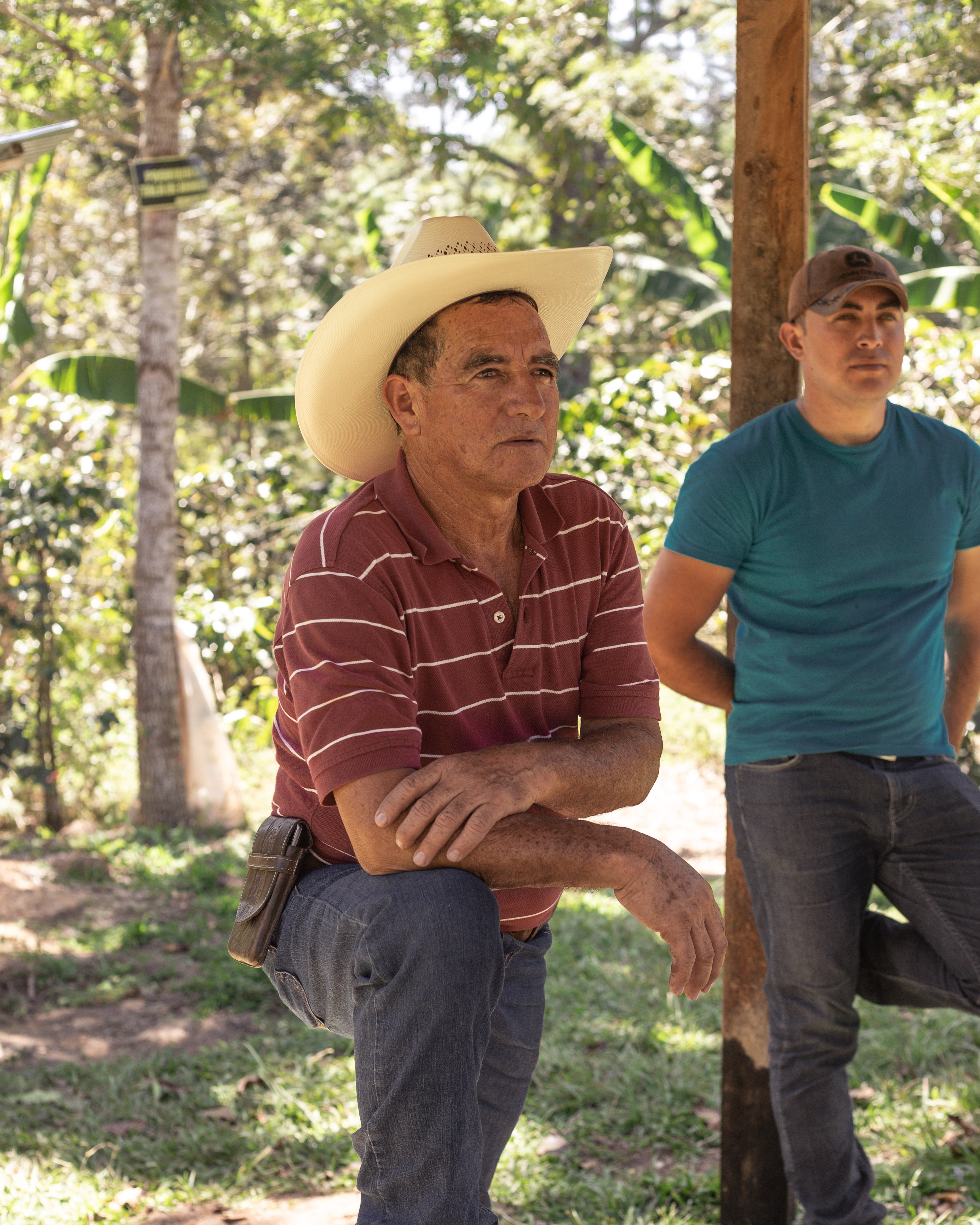 Santos Sanabria is the owner of El Aguaje, a model farm in Las Capucas. He is known for adopting terracing and contour farming, measures used to combat soil erosion and to improve efficiency. Constantly renovating parts of the farm, El Aguaje is never producing its full capacity but it is the only farmer we spoke to that didn’t experience losses this year. Santos is also known in the area for a curious family fact: his father is said to have had 67 children! And these are only the registered ones… 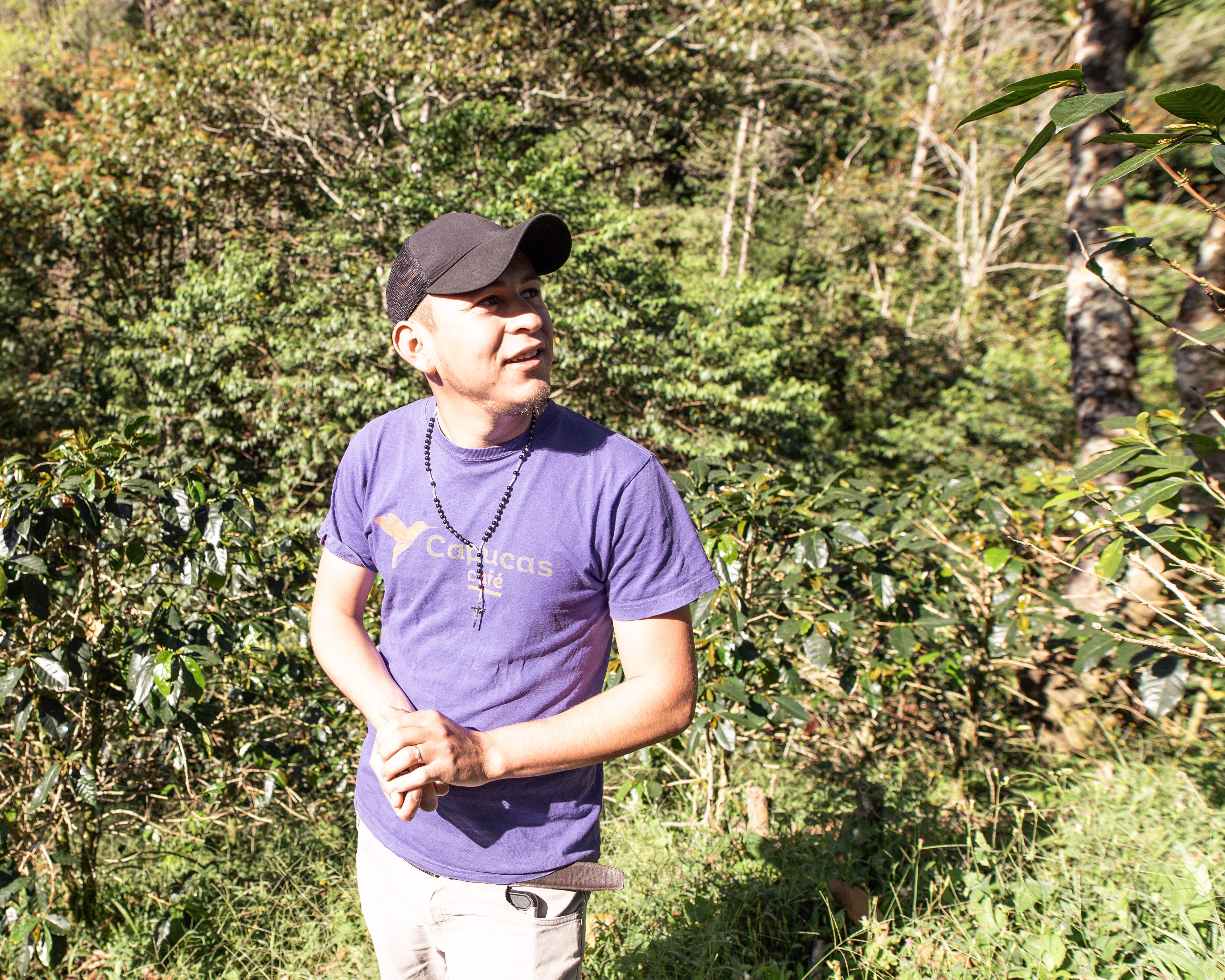 Marlon Gustavo Mejia (“Tabito” for friends) adopts a series of preventive measures to keep leaf rust away from his farm, El Viejo Rancho. The farm is organic, so he can’t use chemical inputs. He collects microorganisms from the mountains to enrich the soil, uses lime to correct acidity and whey from sour milk - only unpasteurized will do - to fight the fungus. “I spray the sour milk on the leaves of the trees and it attacks the fungus,” he says.

Cut in half: what is behind the production losses in Copán’s highlands

Coffee production in Honduras is going to be reduced from previous years. How much smaller the harvest will be is someth...

This month, three members of the Algrano team have been travelling to the Western part of Honduras, a country where more...