The main harvest in Central and Western Kenyan counties has just finished and coffees should be ready to cup soon. This promises to be a bumper crop, which prolonged the length of trading days in December. As new regulations are under debate in parliament, discussions on lot bulking and the future of micro-lots are taking place on the auction floor.

Late in December of 2021, the Nairobi Coffee Exchange saw one of its longest auction days, with traders bidding on lots until the late hours of the night. “We started at 7 am but there was so much coffee… Also, farmers were pushing harder to get money for the holidays and school fees”, explains Vava Angwenyi of Vava Coffee.

The latest Kenyan crop started in October and flooded the auction with lots last month, some of which should be in Europe for roasters to cup in the coming weeks. Following a year of good weather, Kenyan farmers are seeing their bumper crop coincide with higher prices and are eager to sell. At the same time, changes in the trading system are brewing... 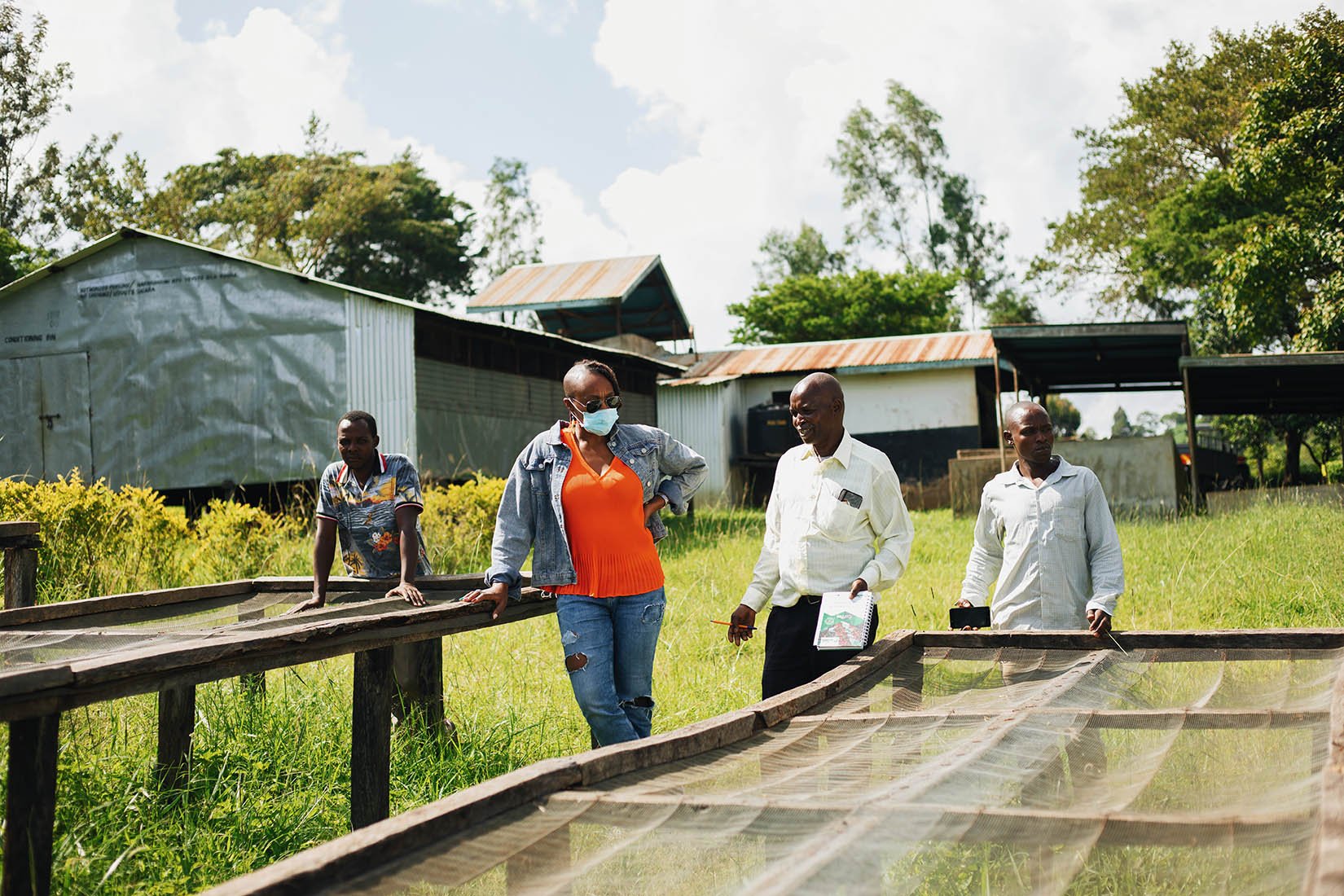 The Centrals you love & gems from the West

The October-December main crop, one of two in Kenya, is the highest production season for everything between Nyanza and Central Kenya, including Western Kenya and Rift Valley*. Counties in Central Kenya such as Nyeri and Kirinyaga have long been in the spotlight due to the quality of their beans and their proximity to the capital, Nairobi. Though Vava is selecting some lots from well-known regions like Ngurueri (Embu county) and Ndaro-ini (Nyeri county), her goal is to highlight gems from other parts of the country too such as Kisii, Nandi Hills, Kericho and Machakos to name a few.

We have amazing coffees to offer this year. The quality has been great so far and we are really proud of all Kenyan coffee producers and their dedication and commitment to their trade despite its challenges. Western Kenya has some interesting gems we shall be highlighting this season. We also have some wonderful micro-lots from Central Kenya that will shine in your cup. - Vava

Vava stresses that the climate crisis continues to impact Kenyan coffee, making rains less reliable and increasing temperatures, but farmers are striving to adapt. “Rapid drying can affect bean quality and flavour but many producers are now the wiser and have innovated to cope with these climate changes.” 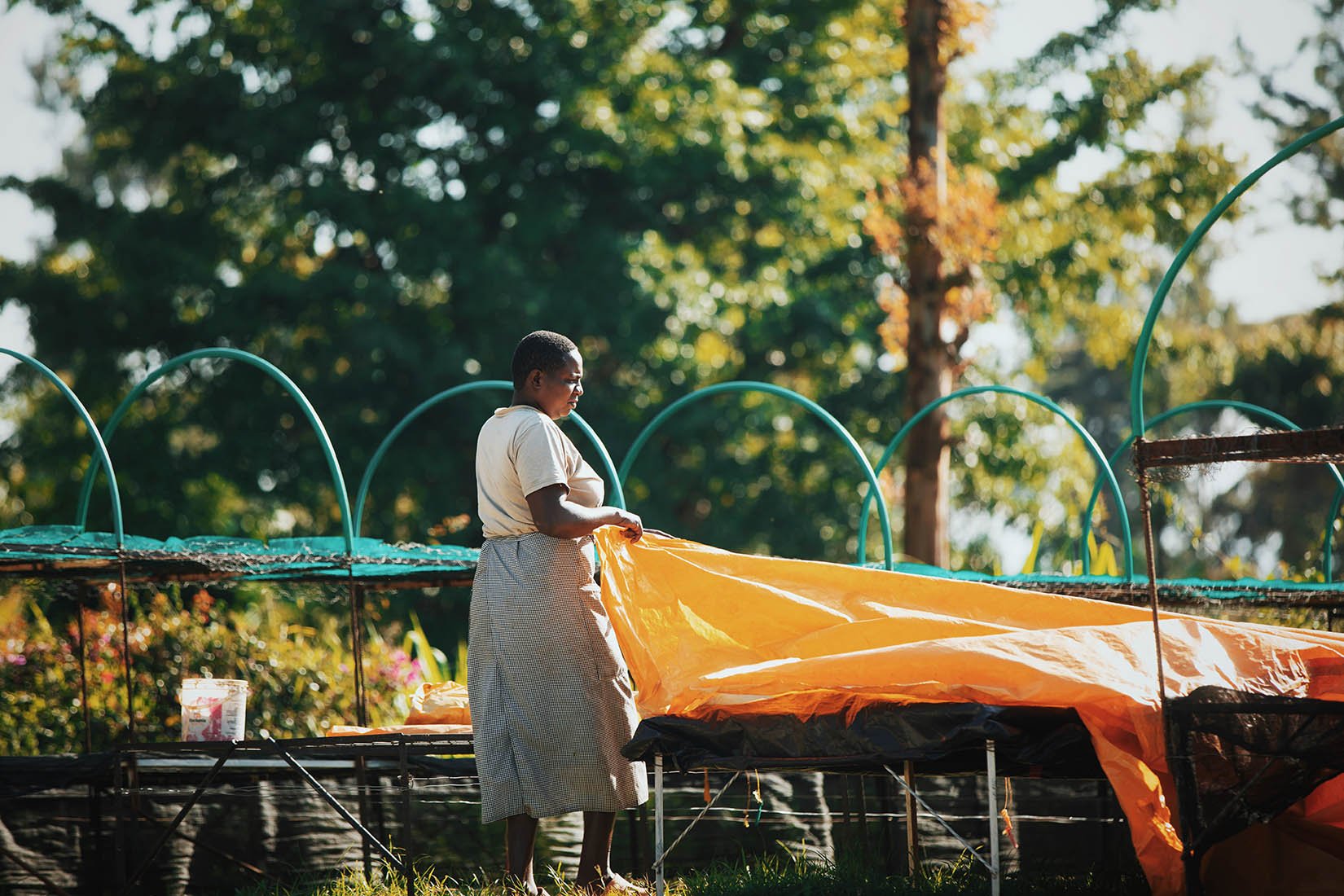 After three years of bad weather with periods of heavy rainfalls and extreme cold spells - both of which delayed the flowering season, led to infestations of the coffee borer beetle and leaf rust issues - this year started well for Kenyan producers.

There are also new regulations on the horizon: the Ministry of Agriculture, Livestock, Fisheries and Cooperatives is trying to pass the Coffee Bill 2021. The sector reform is supposed to address the imbalance between the high prices fetched by exporters and the low prices received by farmers, giving the latter more agency in the supply chain. The bill is currently stuck in parliament.

This imbalance has been a big issue affecting Kenyan production for over 20 years. Central Kenya in particular has seen a great decline in areas dedicated to coffee as landowners find a more profitable market in real estate. Profit from landholdings is one of the reasons why the focus of production has been slowly moving out of Central Kenya towards the Eastern and Western areas. However, lucrative crops like avocado are also attracting a higher number of farmers due to ease of maintenance and marketability.

For Vava, there are other more pressing factors. “The challenge is the opacity of the chain. Producers are unsure or unable to plan season to season because their fate lies in someone else's hands like the marketing agent or the market itself. When producers cannot access capital in advance towards inputs and other developments on the farm it becomes a huge gamble and they may opt for more lucrative ventures.”

The producer and exporter says that she is curious to see what the new regulations, once passed, will bring to the table. “The real question is how effective implementation will be. We have seen such bills in the past that have really not been effective for producer livelihoods.”

Is the future of micro-lots about to change?
Since the long auction day of December, there has also been talking about implementing a minimum lot size of 10 bags in the future, with marketing agents being incentivized to bulk smaller lots in order to trade. According to Vava, the penalty for not doing so could be being sent to the end of the auction queue to be the last to sell.

“Given the volumes that we were dealing with and the length of time it took to wind up a trading day, there have been suggestions to marketing agents, one of them being a minimum of 10 bags per lot. However, the bulking will stop with the producer and what instructions they give to the marketing agent. What this means for traceability as well for some of us producers we don’t know yet. Maybe direct sales will open up for those smaller lots.” 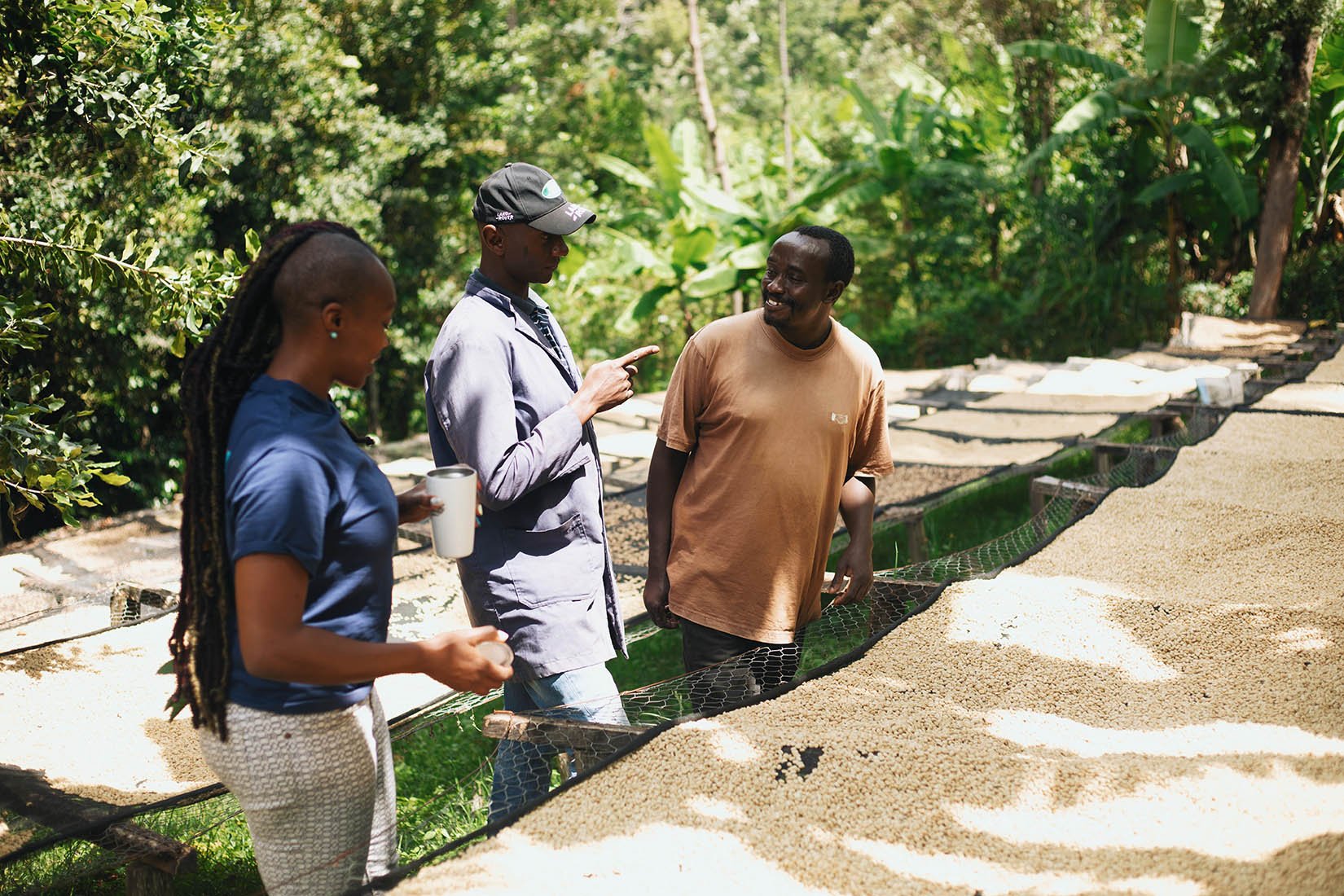 Vava in one of her farm visits planning ahead with one of her producer partners (Photo: Vava Coffee)

2022 is also an election year. Kenyans will take to the ballots on August 9 in the expectation of a peaceful process but knowing there is a history of violent struggles around the casting of votes. Until then, Vava hopes to introduce a new female producer from Central Kenya called Helen Gichohi of Ngoe estate, new co-operatives and an exciting natural lot from Eddy Nyaega from Kisii county. Busy as usual, she is also kicking off a youth educational project focused on creating job opportunities through coffee and building a storytelling portfolio.

“The recent increase in prices is making producers even more committed to improving quality, experimenting and learning. I do think buyers will have to do some work in digesting the high prices and shipping rates this year but my hope is that the new year can have us improve our listening mechanisms especially on the consumer/importer side of the coffee chain and learn to do a better job with producers and perhaps be braver in taking bigger, well-calculated risks to work in a different way.”

*Kenya was divided into provinces until 2010 when the administrative system was replaced by a division of counties. The province names are still used, unofficially, to indicate different coffee-growing regions.

Fixed prices? No, thank you! What high C rates mean for coffee co-ops

Anyone in their right mind would think that a rise in prices is good for coffee. This is certainly not a universal truth...

Exporting and importing logistics is no longer a barrier for roasters and growers who want to trade coffee directly but ...