Fixed prices? No, thank you! What high C rates mean for coffee co-ops

Anyone in their right mind would think that a rise in prices is good for coffee. This is certainly not a universal truth. Here, we look into what the recent increase in prices means for co-operatives in Latin America and why not all farmers are celebrating.

This year has been a test of the strength of co-operatives all over Latin America. With prices for commodity coffee enduring around and above 200 cents (dollar) per pound since October and no lower than 182 cents since mid-August, co-ops now need to secure heftier loans with more financial institutions to pre-finance their harvest. Pressured by farmers demanding higher prices on one side and buyers squeezing them for lower rates on the other, they are bearing the brunt of the market volatility. Rumour has it that some won’t survive the year.

“It is in this type of crisis that you learn who honours their word and commitments”, says Carla Livaque of Cooperativa Agraria Norcafé Perú, a country where co-ops are particularly affected. Carla explains that the expectation generated by the NY Exchange on the ground means that internal prices for commodity coffee are going up even faster than the C-price as local merchants offer higher rates than the co-operatives themselves in search of a quick profit. Merchants don’t offer technical assistance, education, access to inputs, or financing but, pressured by years of underpayment, it’s easy to understand why some farmers are opting for this channel.

It all started way before the frost in Brazil
In this scenario, it becomes harder and harder to honour commitments based on prices fixed long ago. Carla mentions that early in 2021, in fear of the potential frost in Brazil, traders from all over made a run for fixed-price commodity contracts in Peru. Many co-ops with little access to weather services or knowledge of the futures market went for it. Now that the time has come to deliver the coffee, they find themselves between a rock and a hard place: do they deliver and lose money or default and lose credibility?

Norcafé, for example, is currently working with three financial institutions, including Root Capital and Fair Capital. The arrangement allowed them to buy coffee slowly throughout the season, starting before prices spiked, so that their final offer of a lot can be based on an average of what they paid throughout the harvest. “We are not doing fixed contracts right now and are managing open price contracts only up until January. As I see it, the best thing now is to have an open contract with well-defined quality standards set by the client”, suggests Carla.

Working on the limit
The same is happening in Brazil. “We normally buy parchment from our farmers after the contract is signed with the client abroad. If we do that now, we go to bed with a price fixed at 185 cents per pound and wake up with New York at 206! We are working on the limit”, explains Mauricio Alves Hervaz of APAS Coffee (Cooperativa dos Produtores do Alto da Serra), a small co-op in the South of Minas Gerais. “Farmers are selling when they have bills to pay. If they don’t, they sit on the coffee hoping it keeps going up. We have been buying over time this year, but our margins are much thinner. And we don’t have the same liquidity as big co-ops do.”

Mauricio is not jealous of big co-ops in Brazil, though. While most producers are not defaulting on their commitments despite making a loss, they are more likely to neglect deliveries to large players. Bruno Antonio Franco explains that Capeca (Cooperativa Agropecuária de Campos Altos) only fixes a commercial contract once the coffee is purchased. He says farmers in Brazil are scared. “Production costs grew more than the price of coffee. The value of fertilizer doubled, the petrol skyrocketed... At the same time, insurance is more expensive because of climate change. I’ve seen hailstorms this year like never before!” 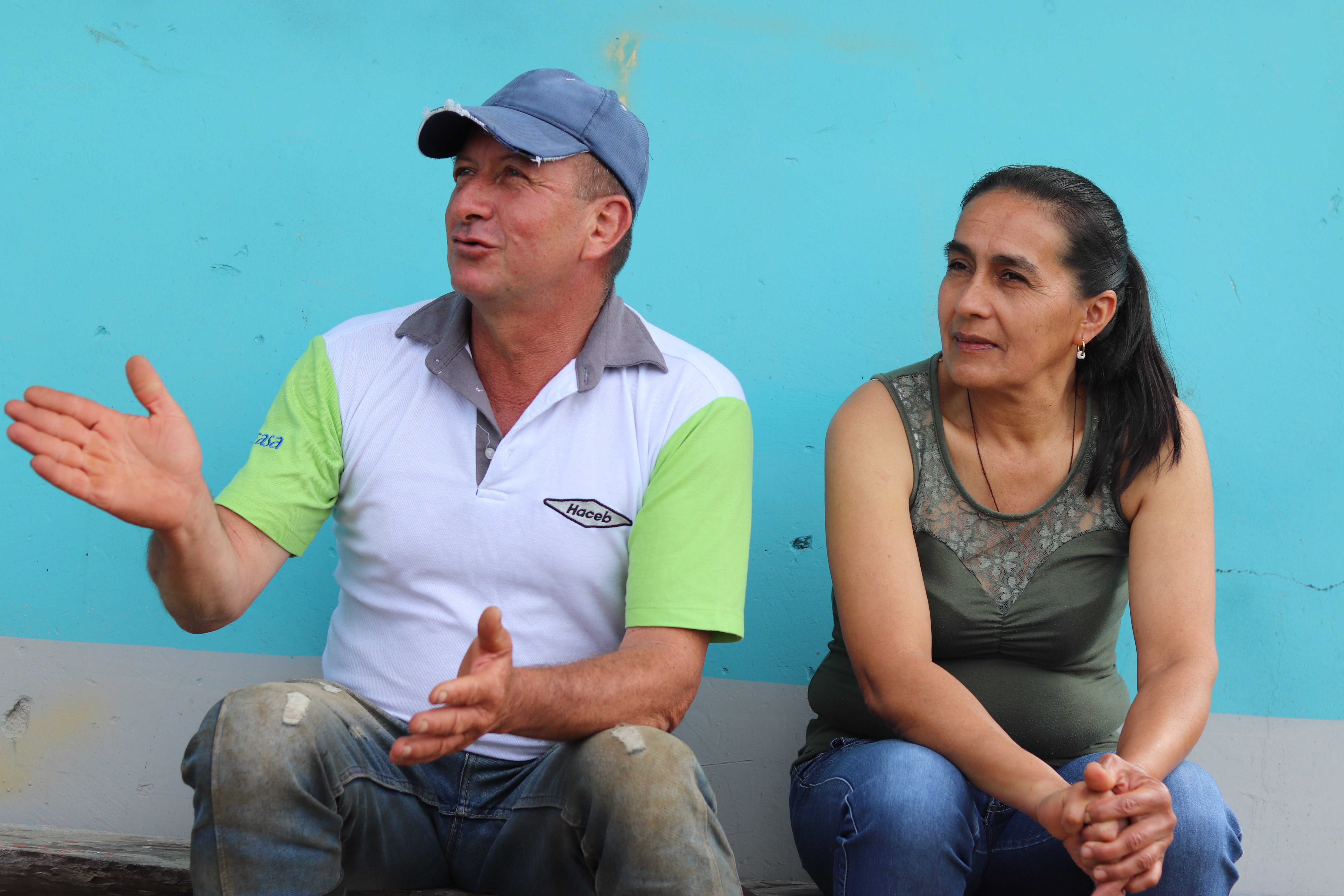 "Coffee farmers have us in their hands", says Julian Gonzalez of Cafenorte in Colombia. (Photo: Cafenorte)

Fixed price? No, thank you!
In Guatemala, where the harvest is only starting, co-operatives have been preparing for a rollercoaster ride. “There is a lot of speculation locally, and sometimes farmers react more to rumours than to technical information. In light of this, we are not currently accepting fixed-price contracts, only ones based on differentials”, says Juan Francisco, the manager of FECCEG (Federación Comercializadora de Café Especial de Guatemala). “I believe it will be possible to fix it again in January after we buy a significant amount of coffee”. Juan explains they have not only renewed financial contracts to obtain credit but also secured loans from two new entities though they don’t expect to buy a larger volume than in the last year.

In Costa Rica, co-operatives are facing yet another challenge: intense competition with multinational traders who are highly capitalized and have large contracts to fulfill. Guillermo Trejos, the manager of Coopelibertad explains that they, on the other hand, “classify all coffees delivered under 3 strict categories and this is what determines the price. It is fair and doesn’t depend on how big the farmer is. This focus on quality is what allows us to compete with big companies in price and to secure stable volumes. Other co-operatives that don’t enjoy these advantages might go into debt and struggle to find credit”.

The crops are small and selling fast
Like in Guatemala, Costa Rican co-ops expect they will only be in a position to fix prices in late December and January. “We already have 70% of our estimated volume pre-contracted. Normally, it’s around 50% at this time of the year, but reduced availability in many origins is leading to early demand. Now, due to the local price, we need to get a really good offer to commit. When it comes to paying the farmer, we know we’ll have to pay more to get the coffee”, says Guillermo.

You might stop reading here and ask yourself: “How is this going to affect me?” Well, all co-operatives offered their coffees with fixed prices on Algrano. This means that for lots with a small MOQ (Minimum Order Quantity) they might increase their prices slightly to make sure fluctuations don’t catch them by surprise. Large orders are also likely to see an increase in price, and prices will be fixed closer to the shipping date. “I recommend a lot of communication and transparency. Getting an offer that is 20 cents cheaper right now might mean buying from a less secure provider”, advises the co-op manager. 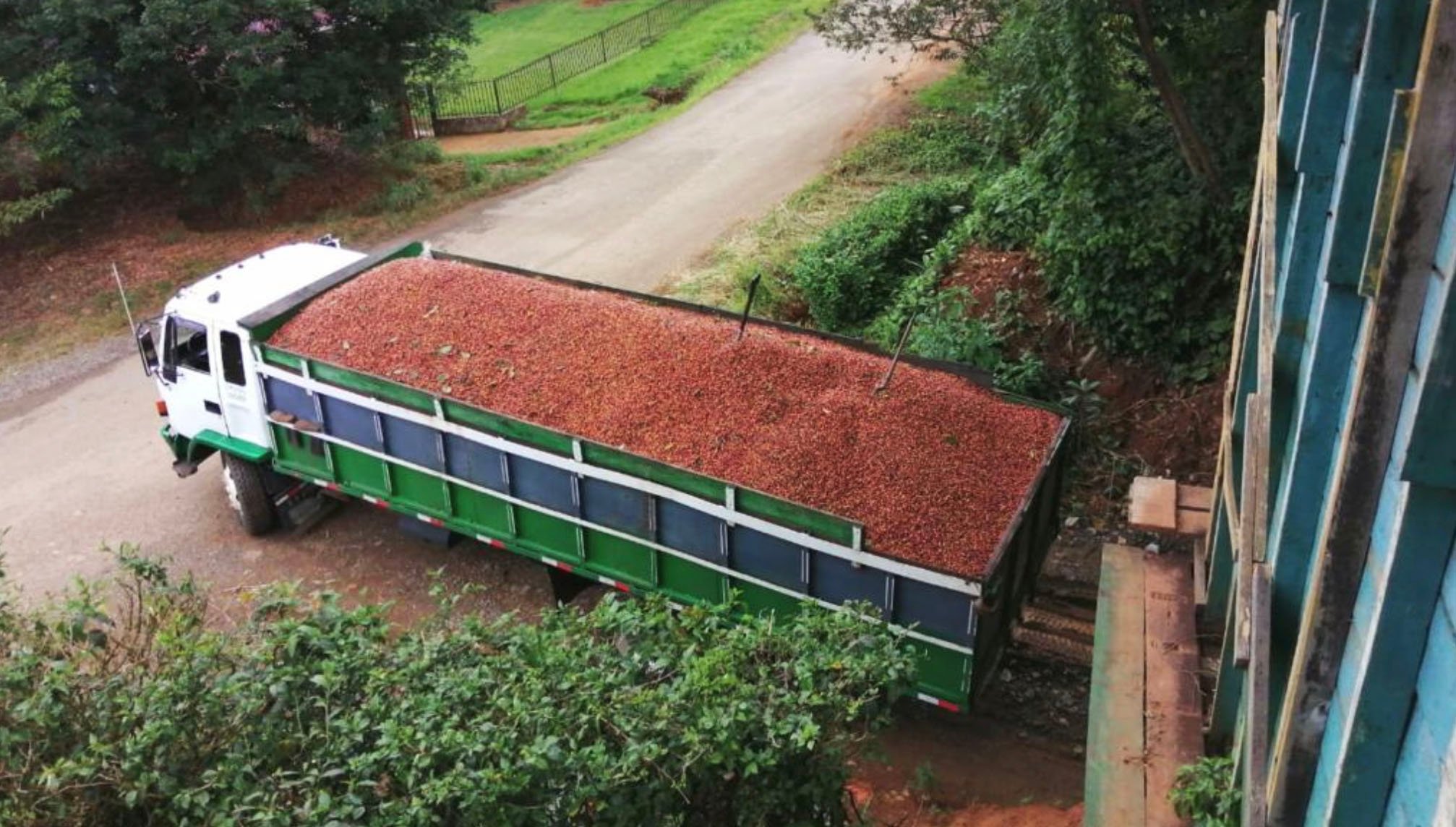 Truck full of ripe cherries from the new crop being delivered to Coopeagri in Costa Rica. (Photo: Coopeagri)

The real price of paying cheap
Unlike in years of low price, when exporting easily gets farmers a better price, right now paying cheap doesn’t guarantee delivery as it once did. With all that is happening, we should feel reassured when a co-operative doesn’t accept a fixed price straight away. It’s wise. “We are very relaxed and have no problems with futures, but we have been prudent. If a client says they want to fix a contract we say ‘No’. We fix on the day or, in some cases, we fix one month before and no longer than that. Coffee farmers have us in their hands, so we can’t take risk positions”, warns Julian of Cafenorte (Cooperativa De Cafetaleros Del Norte Del Valle).

Cafenorte’s prudence comes from experience. “In 2008/2009 the internal reference price was 40,000 pesos per arroba. Then coffee went to 60,000 and lots of people fixed prices for future deliveries, including us. The price went up to 117,000 pesos. We fulfilled all our commitments but had a lot of negotiation to do. And we learned that there is no limit when it comes to risk in coffee”, says Julian. Cafenorte grew resilient since then, and the co-op has its own resources to finance coffee today without relying on loans. “We know we have an opportunity to show buyers that we are a good supplier to have because we have no problems with our internal supply.”

Want to be first in line? Get on moving, roaster!
As we approach a new sales period for North Colombia and Central America, roasters will benefit from having early conversations with their established suppliers. You can already order type samples from a range of producers to have a taste of their coffees and pre-contract based on approval of PSS (Pre-shipment sample). If a supplier is not able to fix the price just yet, you still want to start a conversation now so you are the first in line when co-ops are able to work with set prices again.

The main harvest in Central and Western Kenyan counties has just finished and coffees should be ready to cup soon. This ...

Exporting and importing logistics is no longer a barrier for roasters and growers who want to trade coffee directly but ...