Cut in half: what is behind the production losses in Copán’s highlands

From the US Marines to an island in Indonesia: meet Troy Kiper of Bright Java Coffee Sep 27, 2021
The nagging startup feeling of a former banker - meet Florian, our new CFO Aug 13, 2021
What’s happening with the price of coffee in Brazil - and what you can do about it May 11, 2021
How to break the link between specialty and the C-price & other questions roasters are asking right now Aug 10, 2021
How Bell Lane and Canta Galo built a relationship from a 3-bag order Sep 29, 2021
Categories | Subscribe | Populars
Written by algrano
on March 16, 2020

Coffee production in Honduras is going to be reduced from previous years. How much smaller the harvest will be is something that is harder to grasp as no official numbers have been released yet. Estimates hover around 30% less than the last harvest year, implying a reduction of over 2 million exportable bags. In the village of Las Capucas in San Pedro Copán, Copán department, the loss is even more impressive. Farmers in the area have been projecting losses of 50% and above since December last. 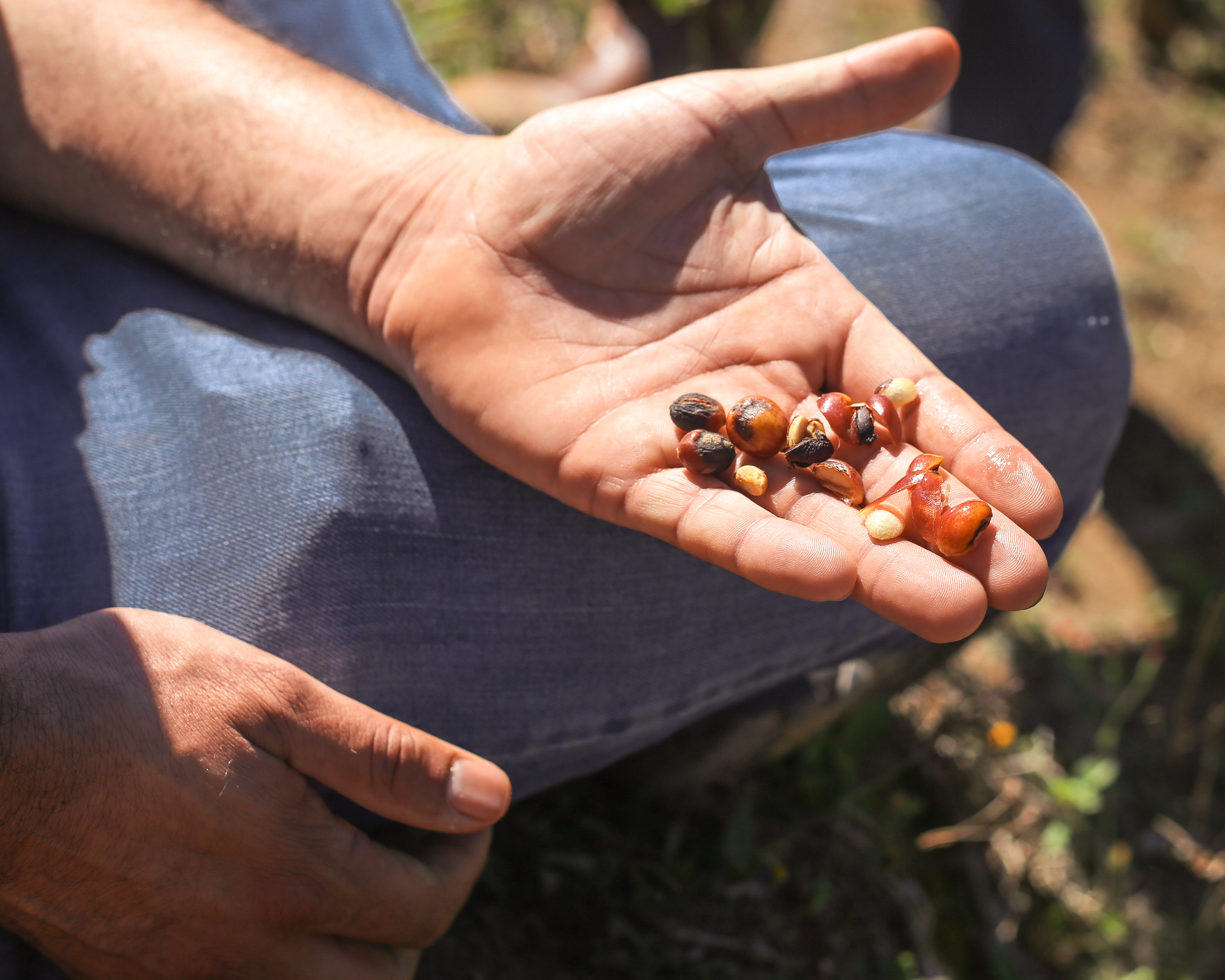 The 2019-2020 harvest year falls within coffee’s biennial bearing cycle’s “light year”. This normally explains production losses of up to 20%. Capucas halved harvest is the result of that plus a combination of continuous afflictions. Local farmers list causes such as this year’s random rain patterns and heat, which created ideal conditions for the propagation of the leaf rust fungus. Also, rust-resistant varieties are slowly losing resistance and require more and more managing, something many farmers can not afford. 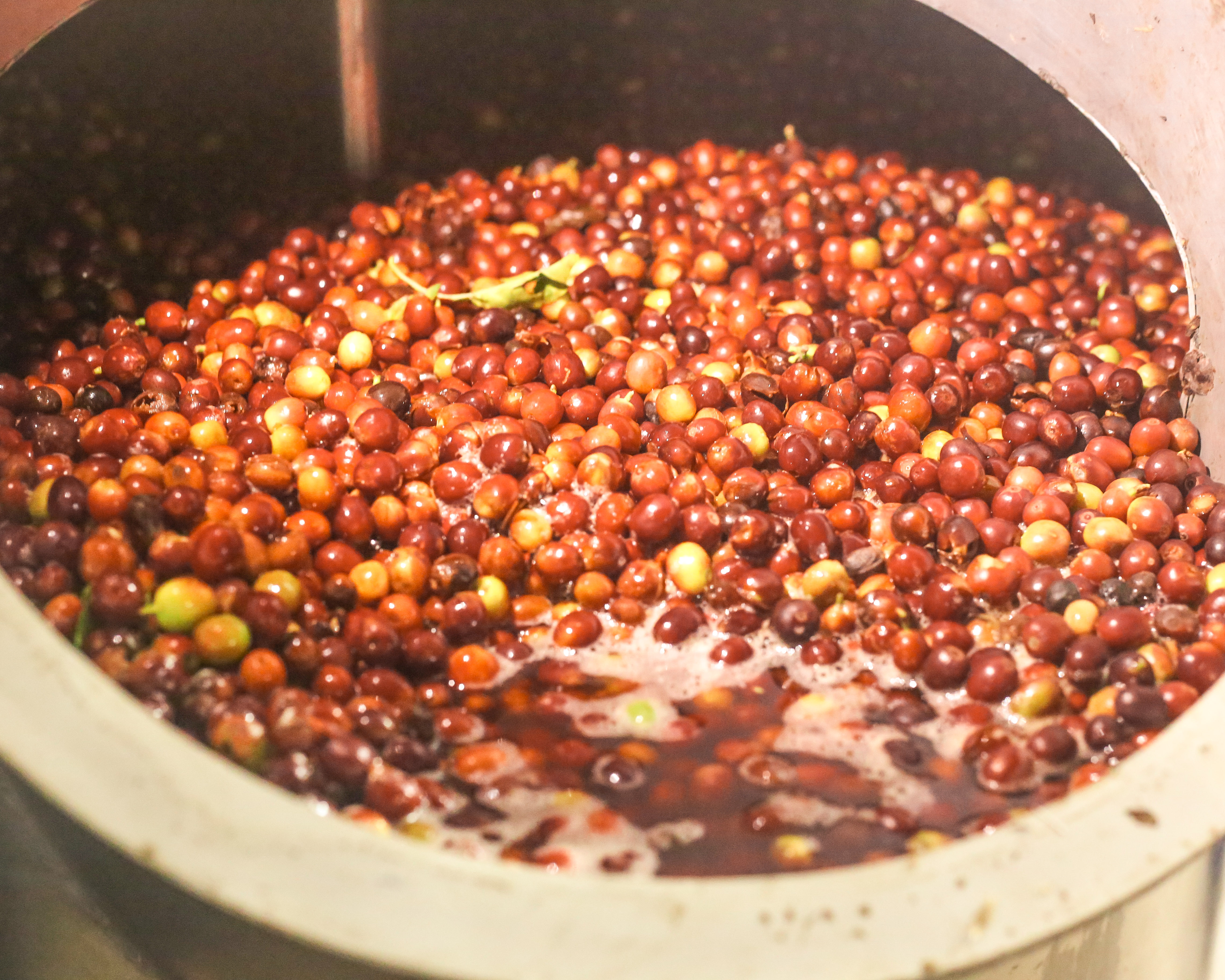 To compensate for the lack of quantity, small community co-operatives have been investing in quality and certifications to access differentiated markets. Cooperativa Cafetalera Capucas Limitada (Cocafcal) is one of them. They are showcasing single-farm micro-lots, anaerobic fermentation coffees and bigger lots of multiple processing methods in the next Honduran Discoveries, available to sample now. 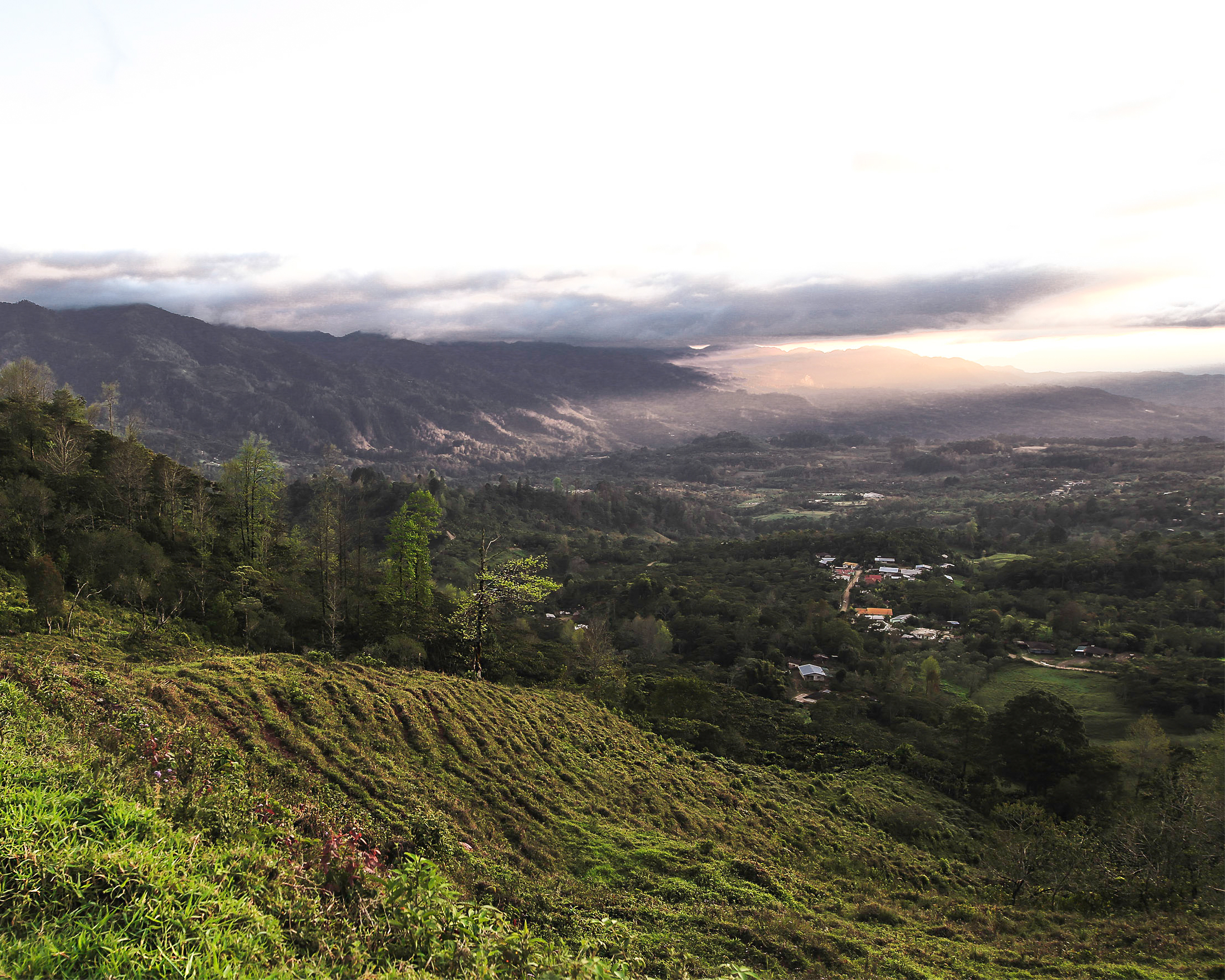 Reading the leaves of coffee

With a panorama dominated by the Celaque mountains, Capucas is a sight to sore eyes. The proximity to Celaque National Park, a protected area, and the predominance of shade-grown organic agriculture portray a perfectly healthy countryside. Here and there you see coffee plants stripped of their leaves due to leaf rust, but the fungus is so widespread in Central America that every farm will show some symptoms. No one bats an eyelid. It takes a farmer’s trained eye to see the more subtle signs behind the cherries and leaves of coffee trees.

Don Enrique Nuñez (Finca La Fortuna) and his brother Cornélio (Finca La Laguna) recall having 15 rainy days in the middle of the winter. December is normally a cold and dry month in Capucas and the rainy season happens between the months of August and November. This winter, however, nothing behaved as it should have. Summer came early bringing the harvest forward and the rainy season prolonged into the winter. 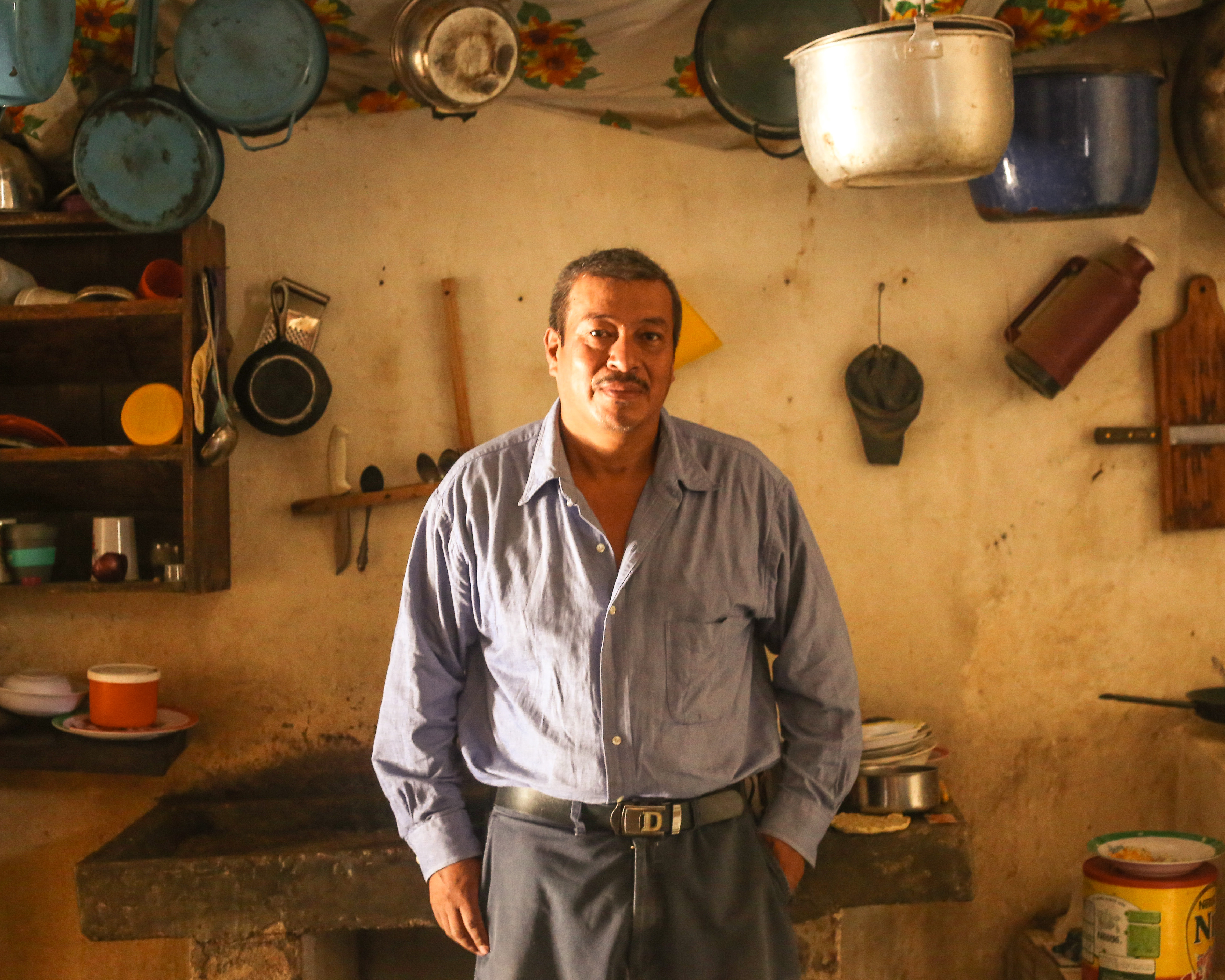 According to Enrique, there as a cold spell that made December’s temperatures plummet to 6℃. “All the ripe coffee fell to the floor. It was raining and really cold. No one wanted to go out picking because our hands were getting too painful. And then there was Christmas,” he explains. Sunny warm weather followed the cold spell, making cherries crack open and lose mucilage. Enrique will have from 50% to 60% less coffee than last year. His account was confirmed by all the farmers we met during our visit to the region with a few exceptions. 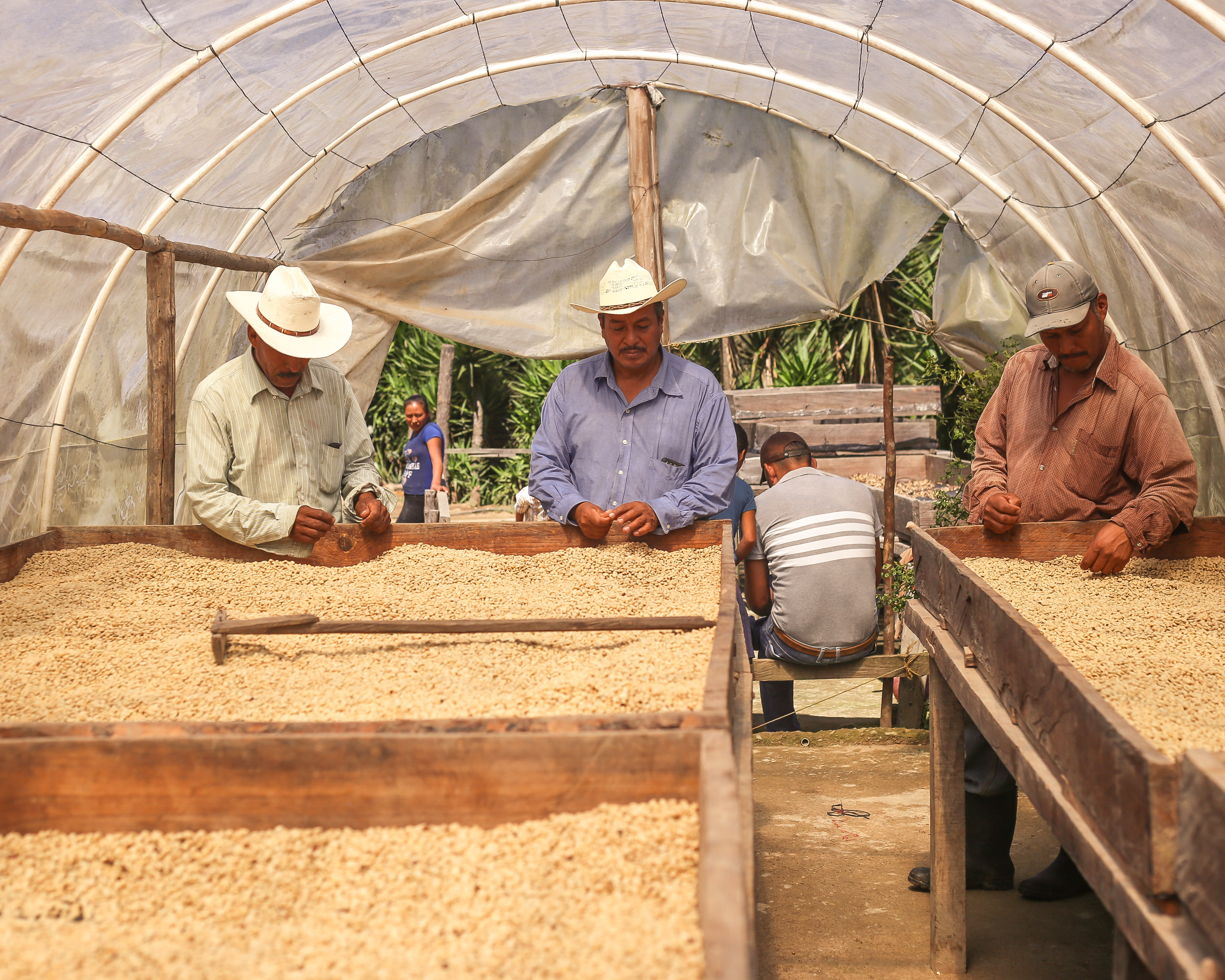 Francisco Villeda, known as Panchito in the village, also anticipated harvesting only half of his regular volume. He is one of the few growers to own a small wet mill and his own polytunnels (plastic tunnels that create more stable drying environments) to dry parchment. Despite the infrastructure, he decided to produce only washed coffees this year. One of the founding members of Capucas, Panchito has been in coffee long enough to remember the glory days. “One manzana (0.69 hectare) used to produce 80 quintales (1 quintal = 46kg) of cherry. These days they produce 20, maybe 30 quintales…” 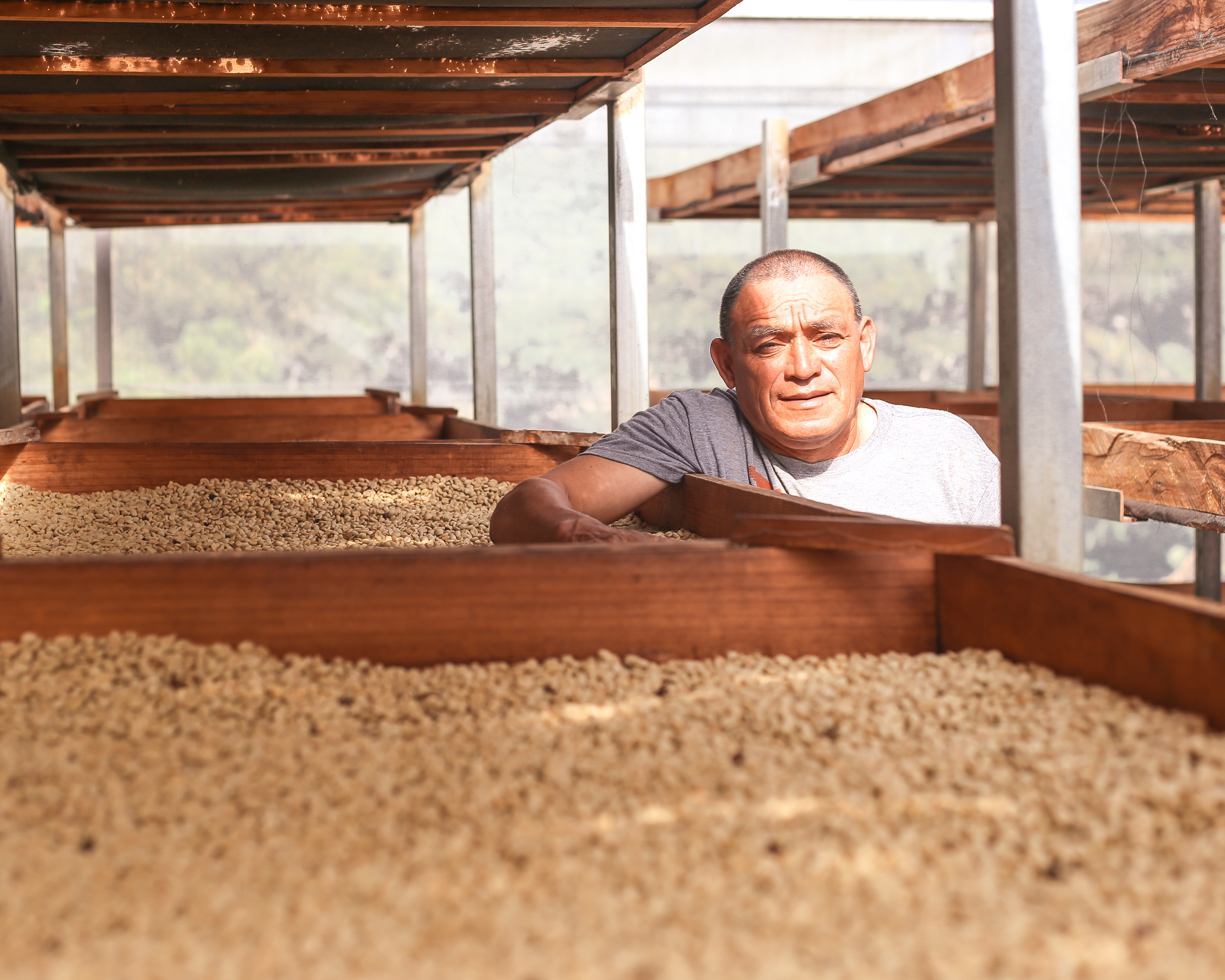 Panchito explains a problem faced by all coffee growers in Honduras - and perhaps all over Central America. Even before the leaf rust outbreak in the 2012-2013 harvest, Ihcafé (Honduran Coffee Institute) was encouraging farmers to replace their more traditional coffee varieties - like Catuaí and Caturra, both vulnerable to the fungus - to rust-resistant ones, like Lempira, Ihcafé 90 and Parainema. Though sturdier, these varieties are not as productive as the old ones and need more management (pruning, fertilizing, etc) to maintain similar yields. 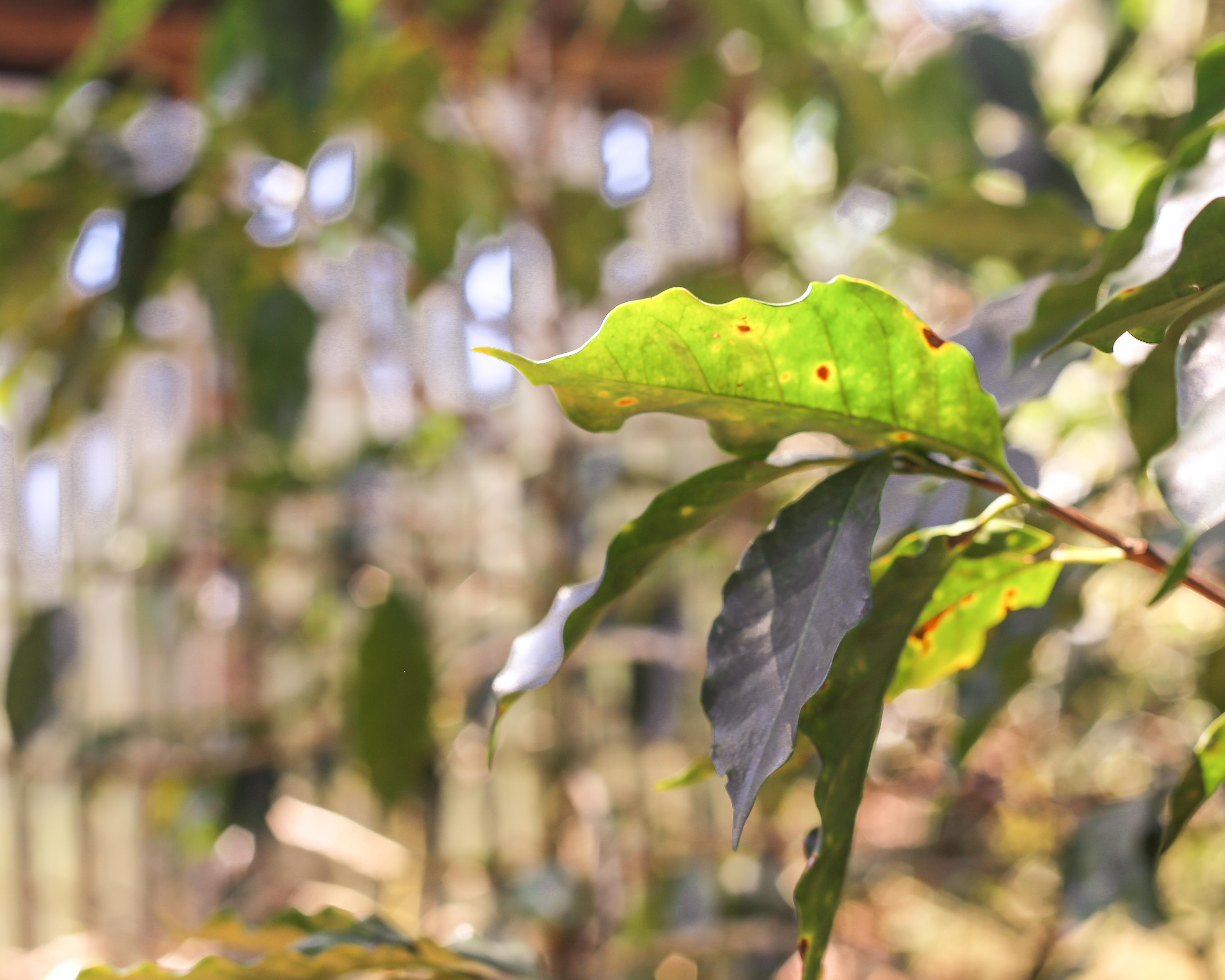 On top of that, these varieties are losing resistance to the fungus. This is happening not only due to mutations in the fungus but also due to how seedlings are propagated. According to farmer and Q Grader Iris Alvarado, only the lab-supplied seeds have guaranteed resistance because they are produced from grafting. “Most farmers populate their nurseries with seeds from their own trees instead of buying new ones every year for renovation,” she explains. This allows growers to breed plants that will be well adapted to their farms. However, the second or third generation seeds are less resistant than their parents. 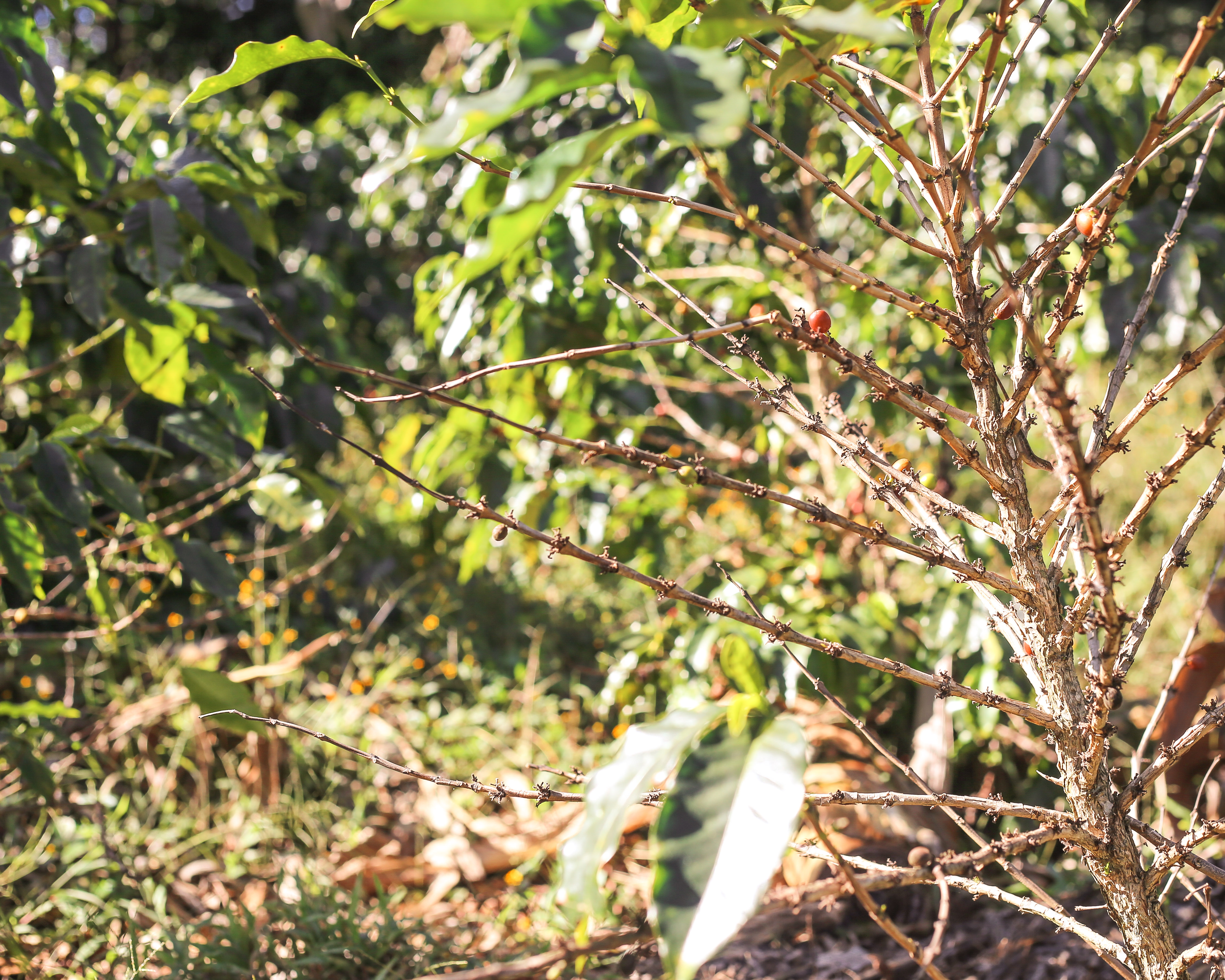 Where there is a will…

With 50 cultivated manzanas, Marita Romero can dilute management costs and invest more in tree renovation, one of the ways to keep higher yields. Her production only went down by 20%, which is less than the country’s average and to be expected in coffee’s “light year”. “We need a strong renovation and fertilizing plan for the farm. The leaf rust fungus spreads when the soil lacks nutrition. The plantation also can’t be too dense, because the proximity of trees helps leaf rust to spread faster,” she explains. 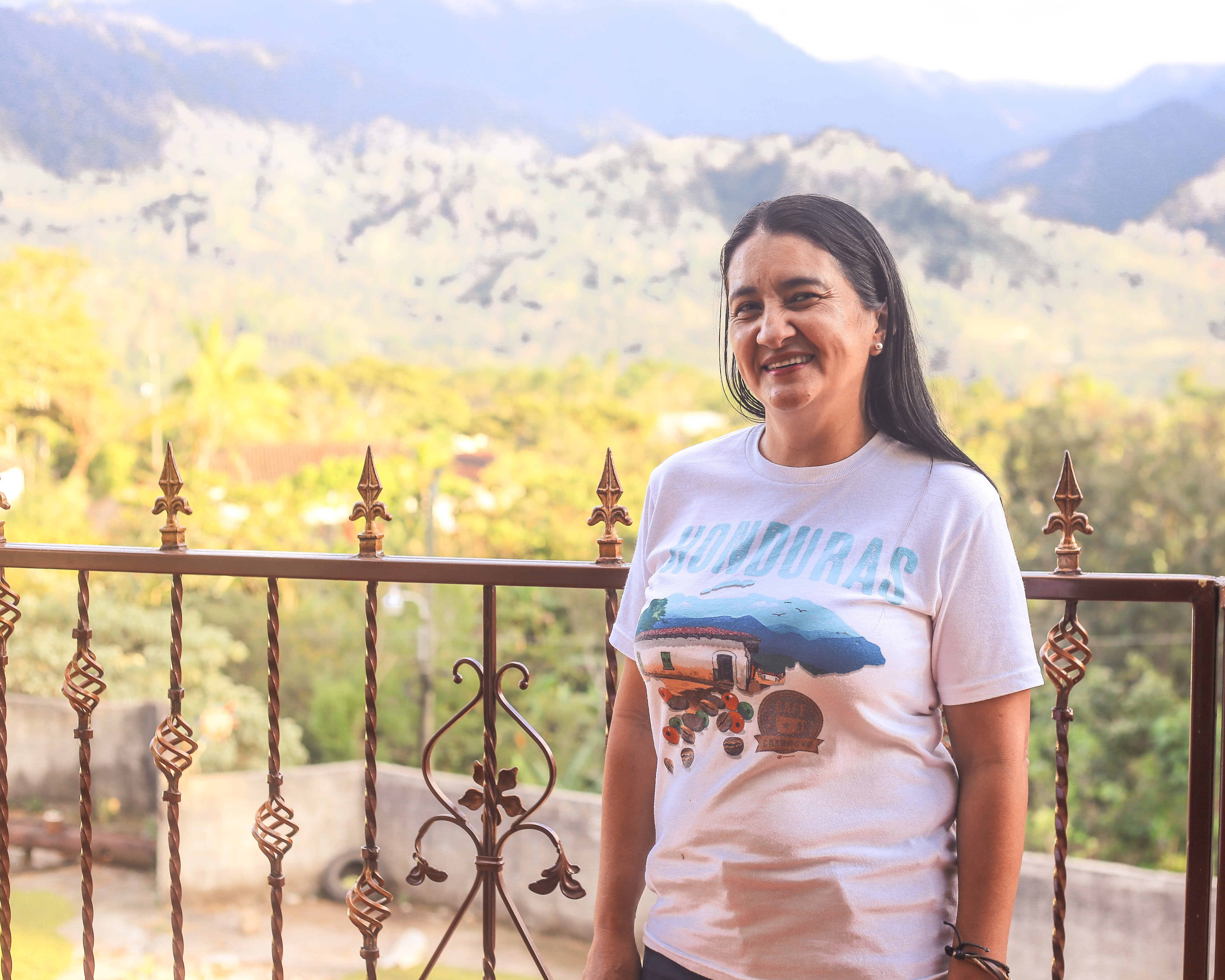 Though it might take a farmer’s trained eyes to interpret a coffee plant, a less informed visitor can easily tell the difference between a farm that has received resources for management and one that didn’t. Farmer Santos Sanabria, a local celebrity (he is one of 67 children by the same father!), owns a model farm that has been made possible due to long term relationships with an international buyer.

Marita, on the other hand, received a big loan from Capucas after the leaf rust crisis and the concurrent death of her husband. This is one of the ways the co-operative found to support its community. The other is the promotion of single farm micro-lots at higher prices. Capucas takes a small fee and the farmer gets to keep most of the sales value. 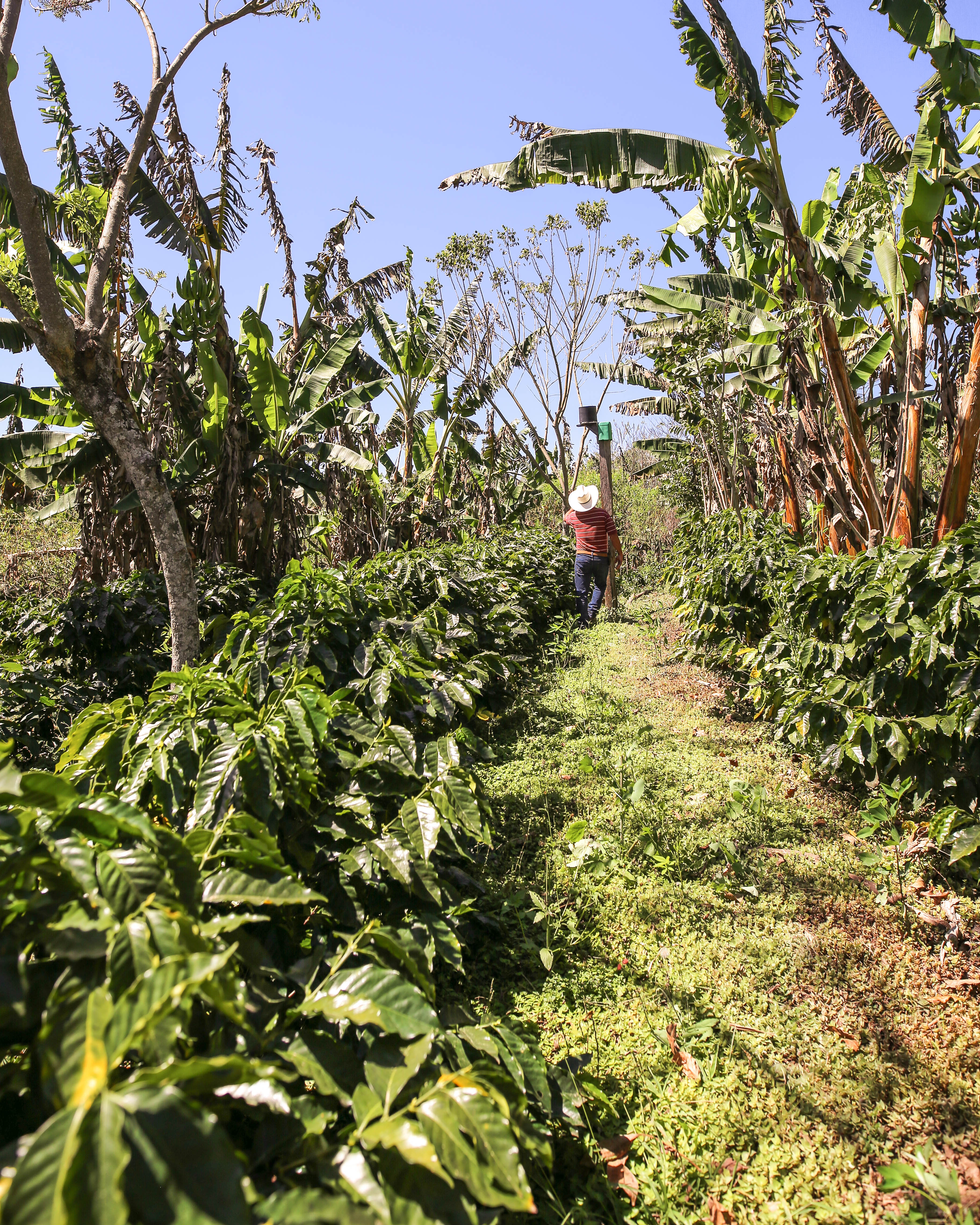 Cornélio Nuñez, Ada Luz Lemos, Iris Alvarado, Rodolfo Lopez and Francis Melgar are growers who already benefit from this model. The 5 will have micro-lots on offer during the next Honduran Discoveries. Capucas will also showcase bigger lots processed at their mill with cherries bought from Pablito, Marita, Santos, Enrique and others. The co-operative is investing in different processing methods - including anaerobic fermentation - to elevate the cupping score of the coffees and secure better prices. They are fighting against all odds to deliver exceptional coffee and defend their land against the unpredictable weather.

The village, located in the higher part of San Pedro de Copán town, is rich in coffees and characters. Below are some sh...

This month, three members of the Algrano team have been travelling to the Western part of Honduras, a country where more...