From the US Marines to an island in Indonesia: meet Troy Kiper of Bright Java Coffee Sep 27, 2021
How Bell Lane and Canta Galo built a relationship from a 3-bag order Sep 29, 2021
The nagging startup feeling of a former banker - meet Florian, our new CFO Aug 13, 2021
How to break the link between specialty and the C-price & other questions roasters are asking right now Aug 10, 2021
Fixed prices? No, thank you! What high C rates mean for coffee co-ops Nov 04, 2021
Categories | Subscribe | Populars
Written by Luiza Furquim
on September 29, 2021

New to direct sourcing? Read Niko's story. The Irish roaster messaged Brazilian producer Heron on Algrano after a small micro-lot order and quickly connected. Now in the 2nd year of their relationship, Niko has 160 bags on the way. He also secured his favourite anaerobic coffee before the harvest even started and become one of Heron's key partners… 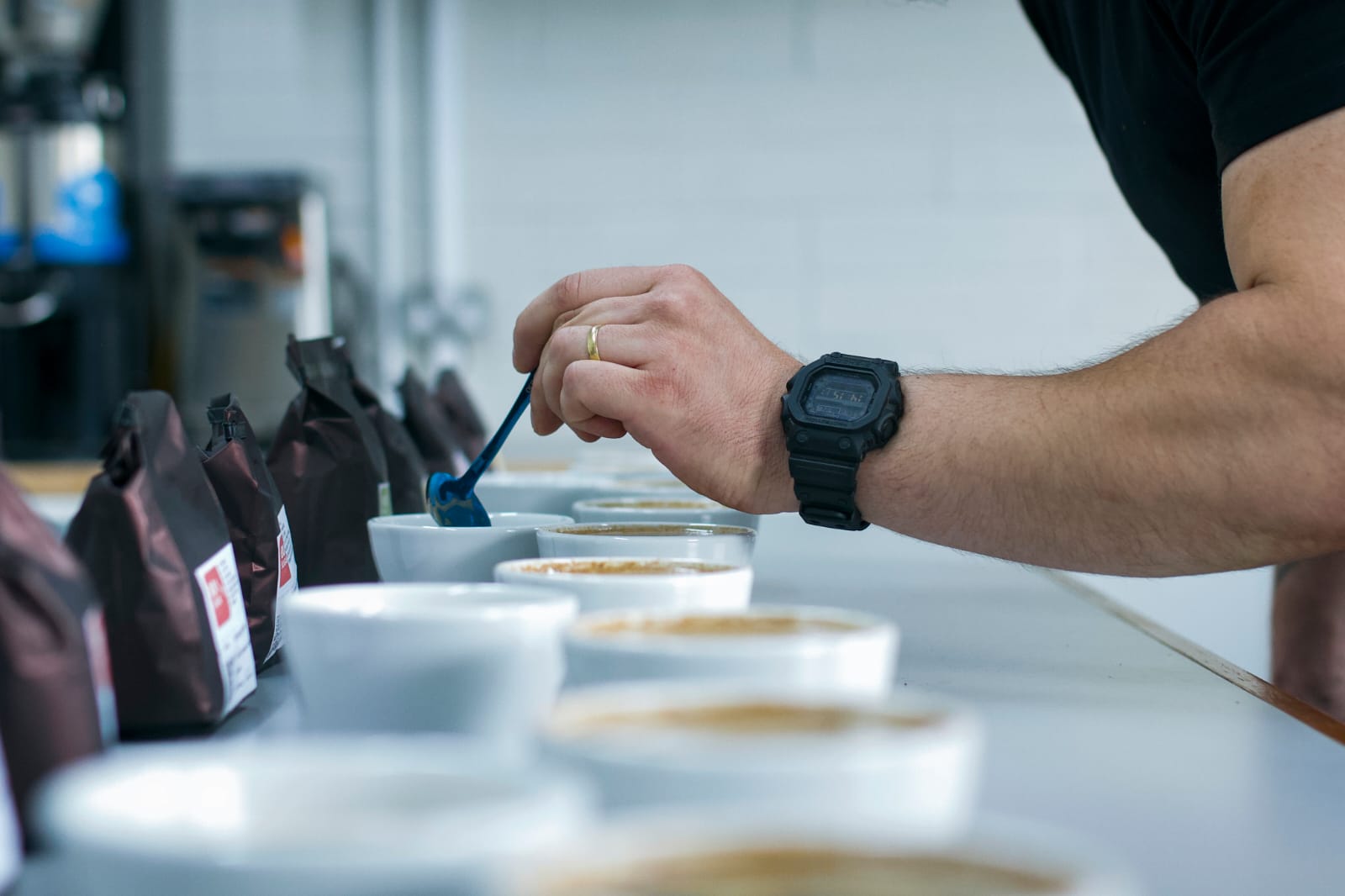 It all starts with cup quality at Bell Lane. A blind cupping is the first stage of every new relationship. (Photo: Bell Lane)

Last October, Nikola Sunko ordered a sample box on Algrano and cupped blindly as he normally does. The master roaster of Bell Lane Coffee in Mullingar, Ireland, Niko chose his favourite, logged in to the platform straight away and bought three bags of the coffee. It was a 90-hour anaerobic from Heron Reger de Carvalho of Fazenda Canta Galo in Brazil. Then, he got this feeling of “now what?”. He felt both happy and awkward. He’d bought the lot based on quality but great coffee is only one of the reasons why Niko is a roaster. He wants to make a difference.

With a background in civil engineering, Niko changed careers when a recession hit the Irish construction sector and he couldn’t be happier. For him, the coffee industry is “the only one where you can easily see your influence and the impact of your hard work”. Bell Lane pursues this through its direct sourcing model and by being honest with customers and suppliers. As trade is cloaked in “mysticism” and no one seems to agree on what direct trade means, Bell Lane’s sourcing is based on transparency, especially towards the producer. “This is where we usually fail as an industry,” he says.

Niko (above) is the Head Roaster and green buyer at Bell Lane, an award-winning roastery in Ireland. (Photo: Bell Lane)

This is why, soon after the order, Niko got in touch with Heron via Algrano’s messaging app and scheduled a call on Zoom. They already knew they had a shared passion for good coffee but when Niko saw “the love and pride Heron had for his work and the ownership in what he does it was remarkable. I fell in love with him straight away.” Heron didn’t speak English very well but Niko’s wife is Brazilian and assisted with translation. They started talking on WhatsApp regularly with the help of Deepl.

Niko wanted to pursue a partnership with Heron and knew those three bags had only been the beginning. In business for eight years, Bell Lane already had demand for slightly larger volumes, so Niko decided to pre-contract 160 bags of Heron’s next crop. “We discussed the quality we were looking for and talked price straight up. From working with producers in recent years, I know they immediately talk about pricing. They need to know that they are working with a person who is willing to pay for their product. Once we agreed on that it was very, very easy.” 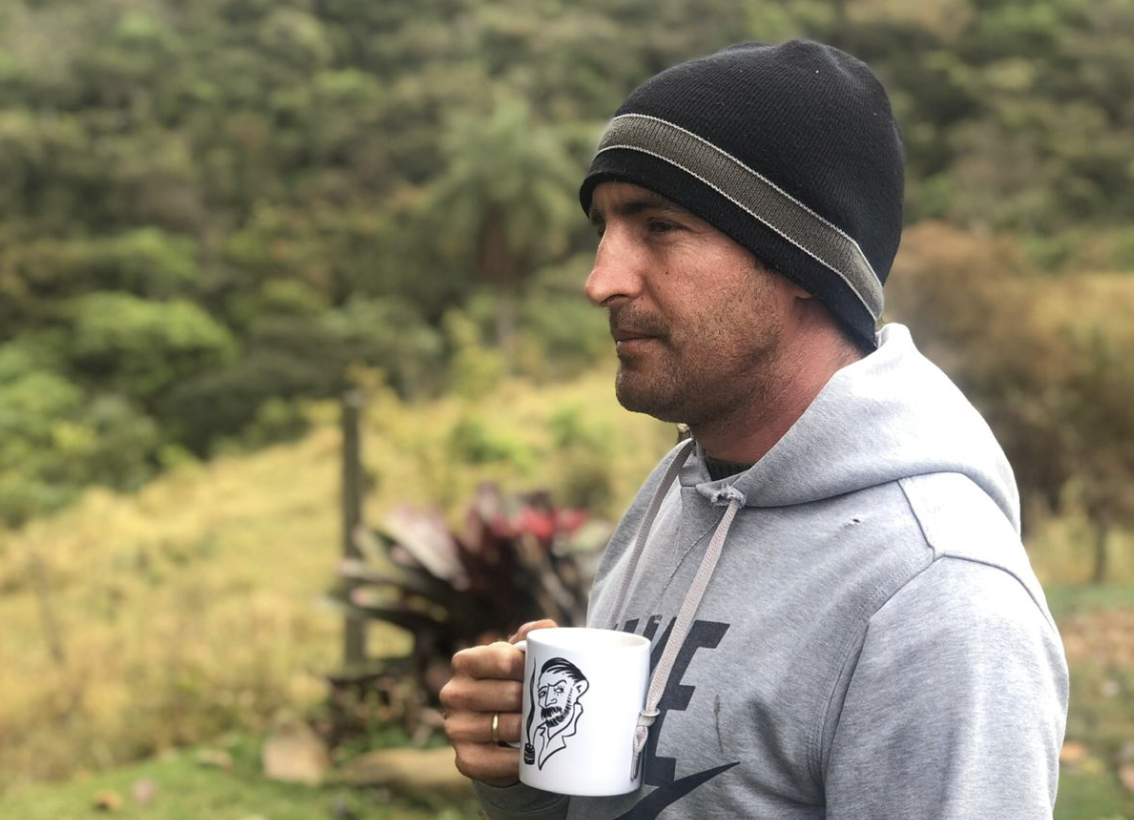 Heron enjoying a morning cup of coffee at Canta Galo this winter, which was especially cold in Brazil. (Photo: Canta Galo Coffee)

The whole process was transformative to Heron, a newcomer to the universe of exports and direct relationships. “This was a dream come true for me,” he says. Heron describes the feeling as “being a boy that was just gifted his first bike”. He didn't have an easy time at the farm because his siblings are not interested in managing the family business as he is since his father passed away, so he is left with most of the work. Without access to foreign markets, he was selling good quality coffee at the C-price up until last year.

“We didn’t have a market for our specialty grades and Algrano opened a door for us. Having this partnership with Niko now means I can guarantee some stability for the farm, especially this year. Half of my current crop was contracted a few years ago to local companies as a way to secure income. Since the frost, fertilizers have become so expensive that I’ll lose money because of those contracts but I have to deliver them. This lots I’m selling to Niko and other direct sales will be lifesavers,” Heron explains. 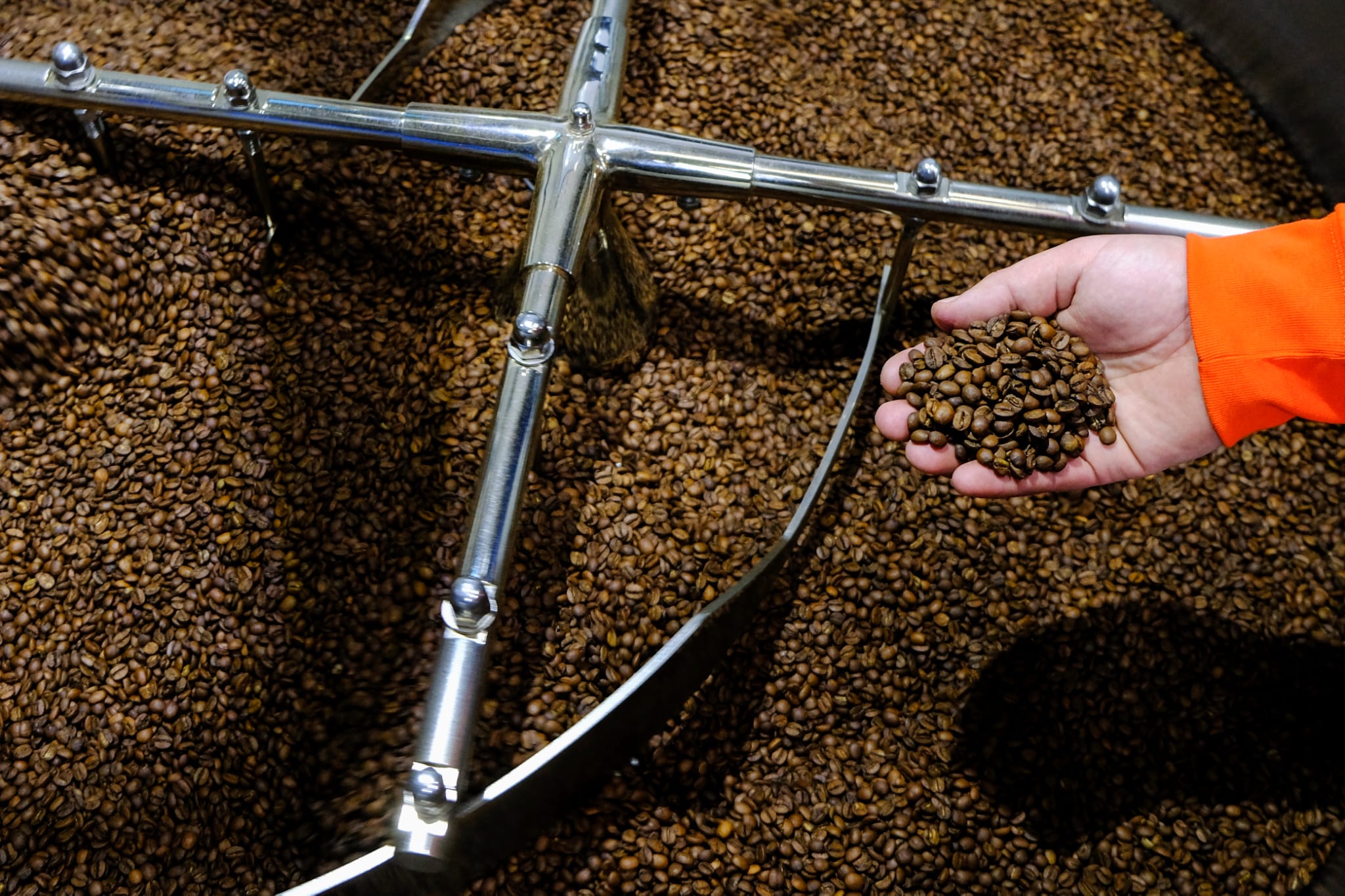 Bell Lanne's Giesen cooling tray. According to Niko, Heron's Red Catuaí was quite different to other Brazils when roasting (Photo: Bell Lane)

2020 was Heron’s first year selling on Algrano. “If I am the first roaster the producer is working with, it’s my duty to do it right," Niko highlights. "We got a good overview of what Heron could do and pushed him forward a bit to see where he could get. Even though we agreed on the price, we put a clause in the contract saying that if the coffee scores above the agreed SCA score he is going to get a premium. Working with a new roaster, producers put a lot more effort in the crops and the coffee usually ends up being much better than expected and they need to be rewarded,” he says.

Though Heron is obviously excited to export a half-full container to Bell Lane, he puts great value in smaller sales too. “Last year, I increased my profit margin by 15% with my competition lots, sales to local coffee shops and via Algrano. I sold five bags here, ten bags there… In the end, I think the total was less than 200 bags, 5% of my production. This is mind-blowing for me! If I can export 15% to 20% of my crop it will make a massive difference,” Heron explains. 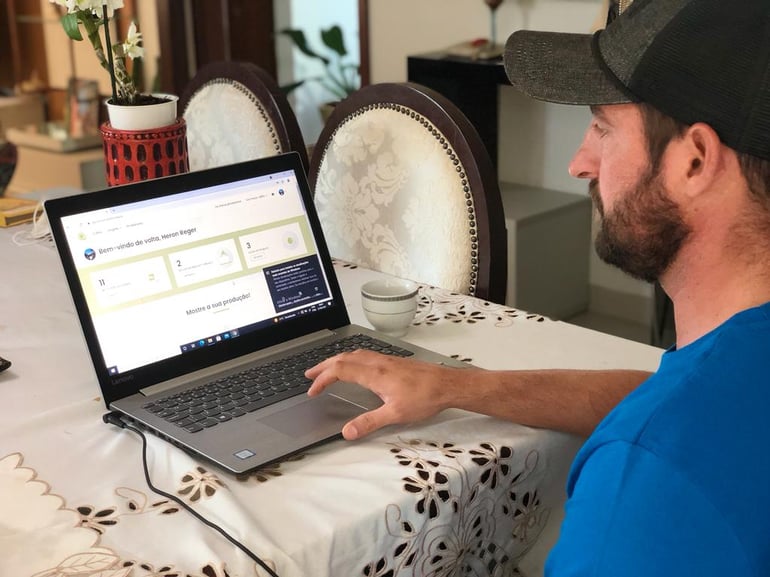 Heron at the farm looking at his sales on the seller's dashboard. "Algrano opened a door for us," he says (Photo: Canta Galo Coffee)

Heron’s new crop is expected to ship to Dublin this October, cementing the second year of Canta Galo and Bell Lane’s relationship. In the meantime (while travelling to Brazil from the UK remains tricky) the two keep talking over WhatsApp and Zoom. Niko loves to visit producers but says that not being able to travel is not all bad. He doesn’t need to stop the production and can plan a trip for when he has more time. “We’re all busy, so technology is a benefit. Getting updates on a day to day basis and maintaining the relationship throughout the year is very helpful.”

Niko also stresses the importance of having a third party to organise the logistics and give them safety, especially when relationships are new. “A platform like Algrano has everything and you can immediately see the benefits. You have an easy overview of everything and you know that if a producer is there it is because they obviously know how to use technology and use it in their daily life just as we do. I think this is the new way of doing things. Doing the things that we need to do over the platform is amazing and I’m embracing this more and more.”